Its much-hyped but minuscule stock ETF holdings are on ice too.

The Bank of Japan – which engaged in QE for longer than any other central bank and leaped into monstrous QE when its new national economic religion of Abenomics took effect in early 2013 – began tapering QE in late 2020, and ended QE altogether in May 2021. Since February 2021, the BoJ has actually reduced its holdings of Japanese government securities, the primary driver of QE and the largest category on its balance sheet (72% of total assets), by 3.5%.

As of its balance sheet for the end of December, released today, the BoJ reduced its holdings of Japanese government securities to ¥521.1 trillion ($4.5 trillion), below where they’d been in July 2020. I started pointing at the end of QE with the release of the August balance sheet when it became apparent what was going on: 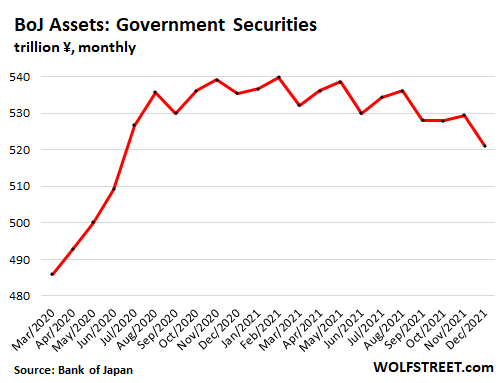 The fluctuations of these holdings are associated with large long-term bond issues on the BoJ’s balance sheet. When an issue matures, the BoJ gets its money back, but it doesn’t purchase the replacements until a month or two later.

In the US financial media, the most-hyped aspects of the BoJ’s QE were its purchases of Japanese stock ETFs. But in the end, those purchases, which ended in 2020, were minuscule: Just ¥36.7 trillion, about 5% of the BoJ’s total assets.

The BoJ marks its stock ETFs to current market value. The Nikkei 225 index has risen about 8% over the past 12 months. Over the same period, the BoJ’s stock ETF holdings have ticked up only 2%. 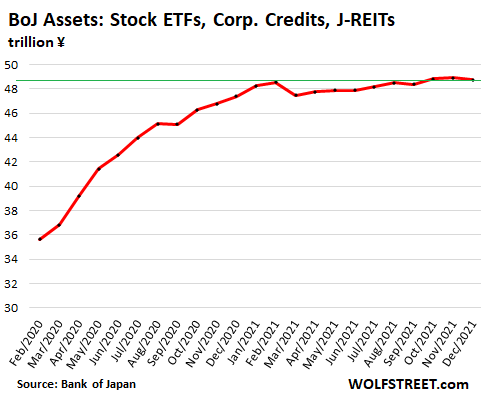 The BoJ has several stimulus-loan programs: its pandemic-stimulus loan programs, and its pre-pandemic loan programs that are supposed to stimulate bank lending. Combined, these loans are the second largest line item on the BoJ’s balance sheet after government securities and account for 20% of its total assets. These loans have continued to grow.

The chart below shows the major asset categories on the BoJ’s balance sheet from February 2020 forward: government securities (purple), loans (green), and the combined total of stock ETFs, J-REITs, corporate paper, and corporate bonds (red line at the bottom): 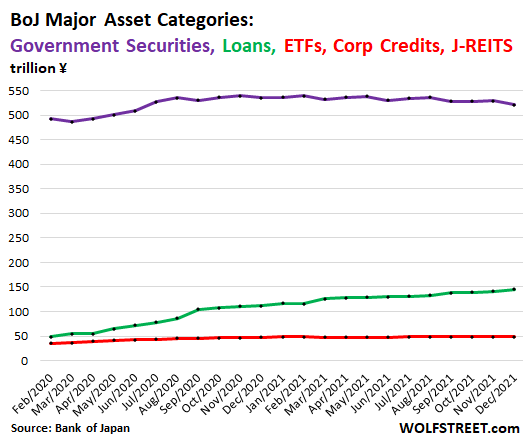 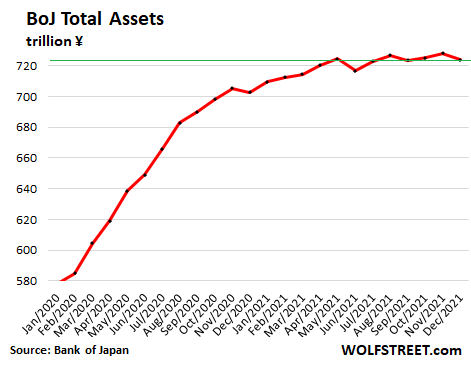 A long-term view of the BoJ’s balance sheet shows the impact of Japan’s national economic religion of Abenomics under Prime Minister Shinzo Abe, which kicked off in early 2013 and ended after Abe’s announcement of his retirement in August 2020, when the BoJ quietly began tapering its asset purchases and ended QE altogether in May 2021:

In the 18-month period from January 2006 through June 2007, circled in green, the BoJ reduced its assets by 36%, unwinding five years of QE, just about all of its QE since 2001, the first modern act of “Quantitative Tightening.” 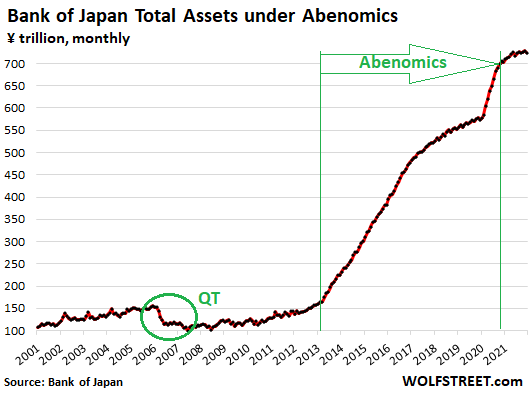