Companies adjust their office footprint to working from home.

Houston’s office market got into trouble back in 2015 when an office construction boom collided with the oil bust that forced the whole industry to cut spending via downsizing and layoffs. Office vacancy rates began to explode. And then the pandemic’s working-from-home made it even worse. Now, over 30% of the total office space is on the market for lease.

San Francisco’s office market, back in 2018, was the tightest in the US, amid ceaseless hype of an office shortage, despite the construction boom that had been throwing new office space on the market for years. But in late 2019, a lot of vacant office space started showing up on the market, with overall availability jumping from 7.3% in Q3 2019 to 9.6% in Q4 2019. Then came the pandemic and working from home. Now, total availability exceeds 26%.

In mid-December, nearly two years into the shift to working from home, office attendance across the biggest office markets, as measured by Kastle’s data from its entry systems, was still down 60% on average from pre-pandemic February 2020, ranging from -72% in San Francisco to -42% in Austin. 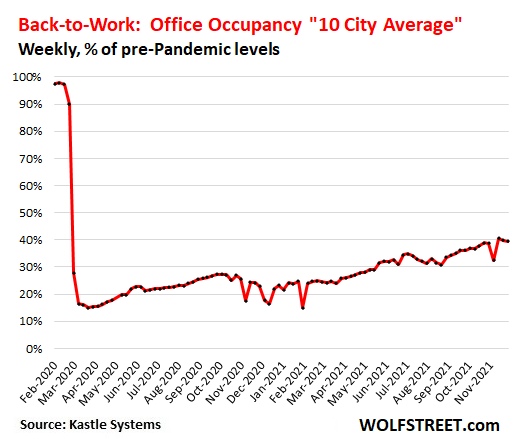 At some point, more workers will return to the office. But working from home for at least part of the week has become a sought-after benefit for employees, and for companies an opportunity to cut costs – less office space.

This has long-term implications for the office market that was based on the theory of endless sharp growth in demand. Companies are already sitting on large unused office space, some of which they have now put on the sublease markets, and some of which they hope they will eventually fill with employees. One thing they’re doing a lot less is trying to find additional office space.

Houston, the sickest major office market in the US.

Availability ranged from 8.8% in Medical Center/South Houston – the “life sciences” sector in real estate is booming everywhere as healthcare is gobbling up the US economy – to 51.7% in N. Belt/Greenspoint. In the Central Business District, availability rose to 34.1% (chart via Savills). 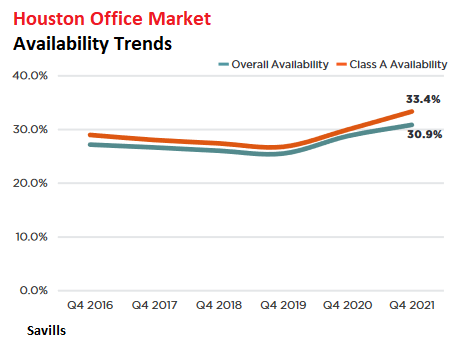 Average asking rents have been hovering for years at around $29 per square foot (psf) per year. Actual deals differ, often with lower rents and aggressive concessions.

Leasing activity remains well below the five-year average and is back where it had been during the oil bust, with 55% being renewals (chart via Savills): 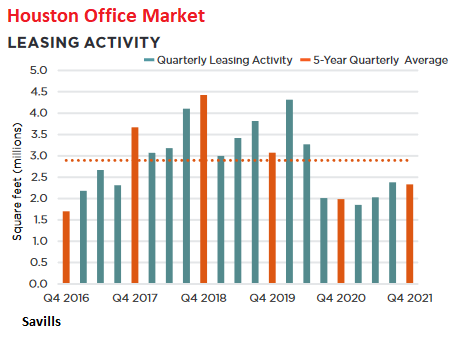 After having stood out with its endlessly hyped office shortage, the San Francisco market has made one of the most breath-taking commercial-real-estate U-turns, and it started before the pandemic. 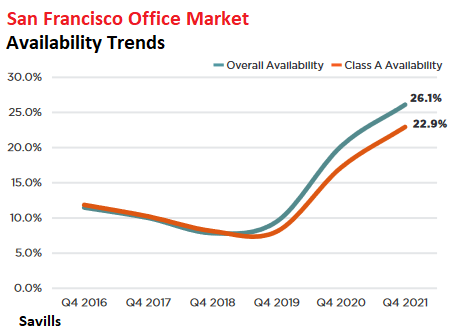 “There is an ample amount of price discovery still happening as landlords are willing to make exceptionally tenant-favorable agreements in order to secure new tenants and retain their current clientele,” Savills said.

Leasing activity, though up from lockdown lows, remains well below the five-year average, and was down about 30% from Q4 2019. About 45% of the leases were renewals: 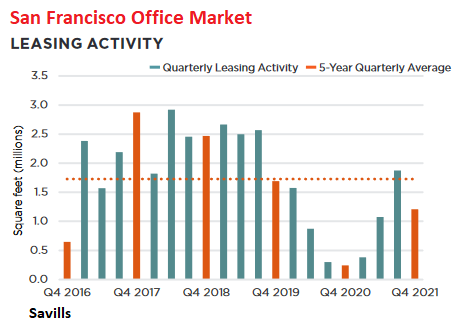 Overall availability rose to 18.6% as new office towers, approaching completion, were added. “This trend of new premium space additions forcing the availability rate higher is likely to continue in the quarters ahead as major blocks at 345 Hudson Street and 919 Third Avenue, among others, come to market,” Savills said. 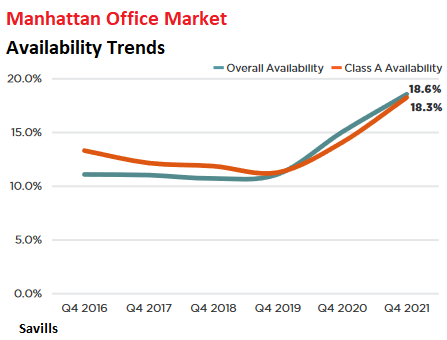 Average asking rents rose for the first time in eight quarters, by 1.3% to $76.03 psf per year – “on the strength of premium space additions,” Savills said – but were still down 9.4% from pre-pandemic levels.

Leasing activity rose above the five-year average for the first time since 2019, but that wasn’t enough to absorb the new additions, and availability continued to increase.

Overall availability, at 24.4%, was flat with Q3. Class availability ticked up to 25.0%. Sublease availability eased to 8.6 msf (from 8.8 msf in Q3) “as space becomes leased, is pulled off the market, or master lease terms expire and the space becomes directly available,” Savills said. 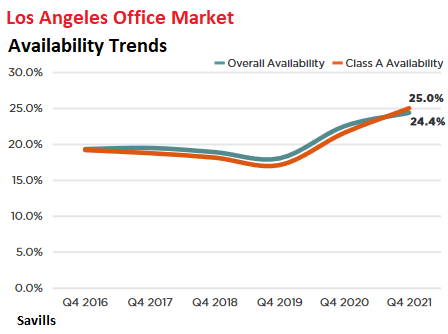 Asking rents ticked up to $3.88 psf per month ($46.56 per year). But “concessions such as rental abatement and tenant improvement allowances remain at an all-time high as landlords aggressively compete for occupancy,” Savills said.

Overall availability jumped to 23.2% in Q4. The market is “increasingly bifurcated,” Savills reported, amid a flight for quality and therefore more demand for Class A office space: 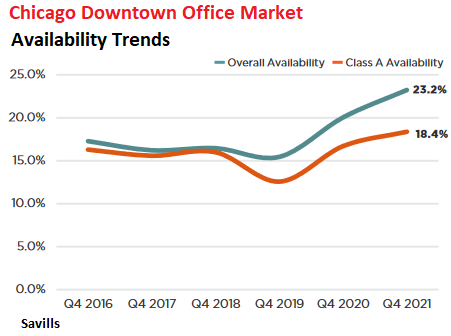 Overall availability has remained at the record level of 21% for three quarters in a row: 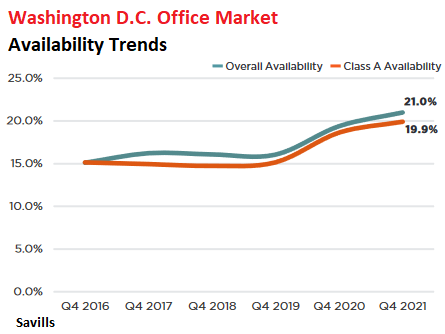 Asking rents remained roughly flat, at $55.19 psf per year. But… “The real story has been the rise in concession packages which continues to validate underlying tenant-favorable conditions,” Savills said.

“Total concessions for D.C. prior to the pandemic historically only increased approximately 5.5% per year. However, in 2020 concessions went up a significant 21.0%, and this past year concessions rose 11.0%. New long-term Class A leases now receive an average of $148.00 psf in tenant improvement allowances and 23 months on average of free rent, totaling $280.00 psf in total value.”

Leasing activity surged 52% year-over-year to 3.0 msf, the highest since 2018, and the highest fourth quarter in years.

“The government sector was the driving force behind demand, accounting for 67.0% of activity by square footage, and sizable leases were signed by both local and federal government agencies,” Savills said.

Seattle/Puget Sound: Meta did it.

Asking rents, in Q4 at $39.70 psf per year, have wobbled along just below $40 for years. Leasing activity, at 1.8 msf was back at the five-year average, with Meta signing the largest deal, and it and its Oculus division signing two additional leases. All three combined accounted for over 17% of total leasing activity. 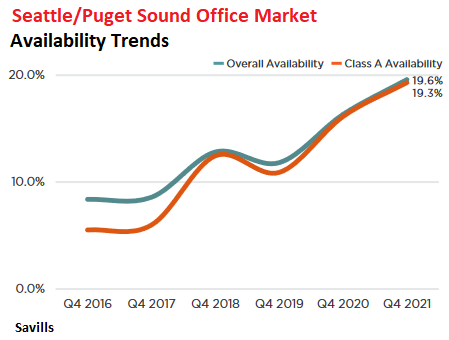