OK, so these are advertised rents (“asking rents”) for apartments listed for rent at various rental listing services, including Multiple Listing Service, and they’re not the actual rents of currently occupied apartments, and they’re not rents for single-family houses, which dance to a different red-hot drummer. And the Consumer Price Index (CPI) doesn’t look at asking rents; it uses surveys to ask homeowners and tenants about the status of rents. Asking rents discussed here are a measure of where landlords think the current market is. And they’re going wild in lots of places.

First because there are only a few: The cities where rents fell.

In San Francisco, the median asking rent for one-bedroom apartments for September, at $2,800, was unchanged from August and was down 25% from June 2019: 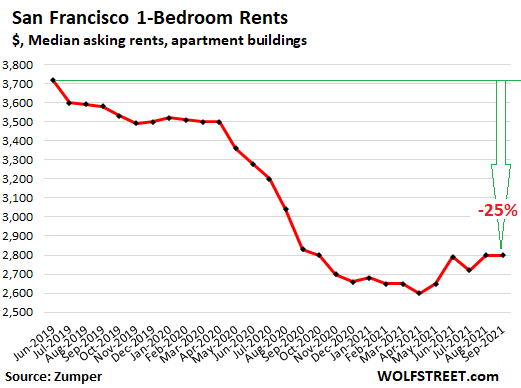 One-bedroom rents in San Francisco have plunged so far, according to data from Zumper, that the once most expensive rental market has fallen behind New York City.

In San Jose, our stand-in for Silicon Valley, rents began falling in the summer of 2019. In March and April 2020, during the lockdown, landlords jacked up advertised rents, knowing that no one was looking for apartments, which produced a silly jump in asking rents, that then dissolved into a plunge when the market re-opened. From July 2019 through September 2021, the median 1-BR asking rent fell 14%, having gone nowhere over the past four months: 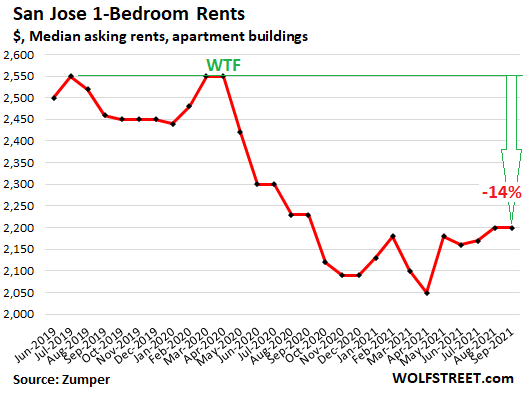 There are a few cities where rents have declined sharply on a year-over-year basis. The biggest declines in the median asking rent of 1-BR apartments occurred in Milwaukee, down 17.4% year-over-year, to $900.

But it’s Newark, NJ, that takes the crown. It shows how asking rents and landlords went crazy on a meme. During the early phases of the Pandemic, apartment dwellers of New York City were said to be fleeing the City, looking for apartments and houses in cheaper pastures. The knee-jerk reaction in Newark, across the Hudson River from Manhattan, was to jack up advertised asking rents, assuming that fleeing New Yorkers had a big appetite for Newark, and lots of money. 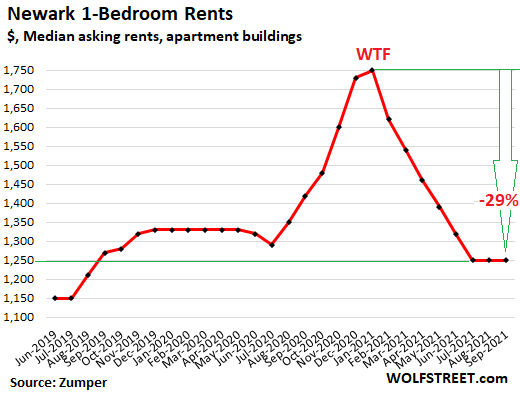 The table shows the 20 cities where the median 1-BR rent declined year-over-year. This includes Chicago and Honolulu. But in those cities, since their peaks in 2015, rents have plunged by 30% and 28% respectively.

There are only three cities were rents declined 10% or more year-over-year. We’ll get to the significance of that in a moment when we look at the 49 cities where rents surged between 10% and 25%:

Expensive Markets where rents rose but are still below pre-pandemic levels. 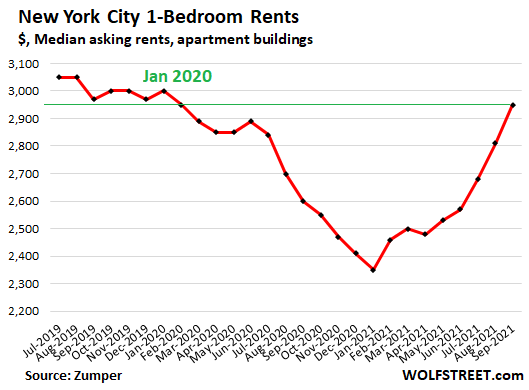 In Seattle, 1-BR asking rents have come up from the lows earlier this year but are still down 12% from before the pandemic and down 15% from the peak in May 2018: 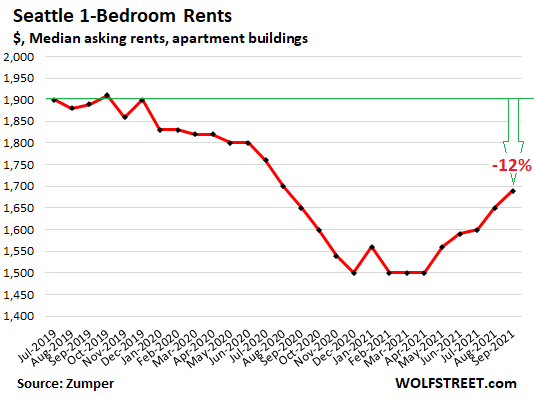 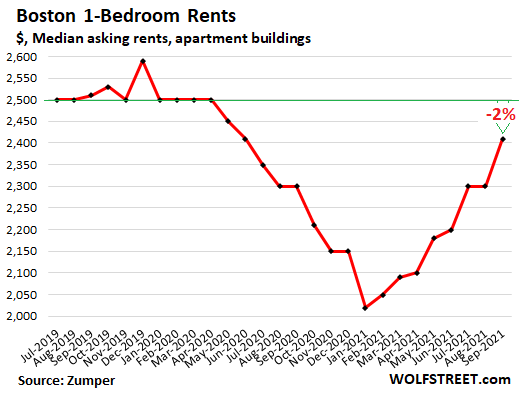 In Los Angeles, 1-BR rents have jumped 11% from the low in January but are down 7% from pre-pandemic levels: 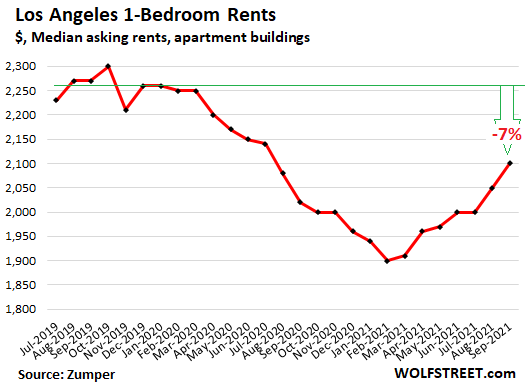 Of the 100 cities where Zumper tracks asking rents, 49 have seen rents jump by 10% to 25% in September, compared to September 2020. These are massive rent increases in nearly half the cities.

In 26 of these cities, asking rents surged by 15% or more. And in 9, rents surged by 20% or more with the top being Gilbert, AZ where rents spiked by nearly 25% year-over-year to $1,660. The top four biggest rent spikes occurred in Arizona. The remainder is spread across the US, from lower cost cities to high cost cities, from coastal cities to inland cities.

This very large preponderance of cities where 1-BR asking rents increased by 10% or more – nearly half of the 100 largest cities tracked – compared to only 3 cities where rents fell 10% or more, makes clear that, averaged out across the US, massive rental pressures are building up. But it will take a while before they’re making their way into the CPI rent factors.

About one-third of CPI is determined by two indexes that both track a version of rents: Rent of primary residence and Owner’s equivalent of rent. Rent of primary residence rose only 2.1% and owner’s equivalent of rent rose only 2.6% in August. Before the pandemic, they’d been around 3.5%. They’re the biggest CPI categories, and they have effectively pushed down CPI this year.

But given what is happening now in rental land, those measures will pick up the rent increases in the coming months and next year, and push CPI higher (rather than pushing it down). This will happen just as the Fed’s “temporary” inflation spike is supposed to unwind. And these rental measures will give new fuel to overall CPI inflation.

The table below shows the largest 100 rental markets that Zumper tracks, with 1-BR and 2-BR median asking rents in September, and year-over-year percent changes, in order of the price of 1-BR rents (if your smartphone clips the 6-column table on the right, hold your device in landscape position):