In its quarterly earnings report, Invitation Homes [INVH], the largest landlord of single-family houses in the US with over 80,000 rentals spread across 16 large markets, offered some clues – or rather bragged about – how hot rent inflation is in many suburban markets and what kind of rent hikes it can get away with.

I generally cover apartment rents, which tend to be concentrated in urban cores. Those rents have spiked in some markets, and they have plunged in others, such as San Francisco. But this is about the corollary, rental houses in suburban markets – houses that are not at the low end of the market. The average monthly rent across the Invitation Homes spectrum is $1,941 a month.

These single-family rentals presumably received some of the flow of urban apartment dwellers that wanted more space to spread out in, and more distance to others during the pandemic and the shift to working from home.

Invitation Homes jacked up rents on newly signed leases in Q1 on average by 13.8%, with amortized concessions figured into the monthly rent. This is up from a 2.7% average increase in Q2 last year.

The rent increases on new leases varied across its markets, all of them red-hot, but some red-hotter than others, so to speak. Only three of the 16 markets – Minneapolis, Chicago, and Houston – got away with single-digit lease-over-lease rent increases. The remaining 13 markets got double-digit rent hikes.

For tenants who renewed the lease, the company hit them with rent hikes of 5.8% on average, up from 3.5% a year ago.

All combined, new leases and renewals, the company raised rents in Q1 on average by 8.0%, compared to 3.3% last year.

How can Invitation Homes get away with these kinds of rent hikes without having to watch how its houses empty out one after the other?

Obviously, none of these red-hot rent increases, or just about any other rent increases have made it into the Consumer Price Index, whose CPI for “rents of primary residence” has miraculously cooled down, from the just under 4% range in the years from 2015 through early 2020, to a year-over-year rent inflation of 1.9% in June, and 1.8% in the prior three months – perhaps because of the sharp year-over-year drops in rents in multi-family buildings in many of the biggest urban areas: 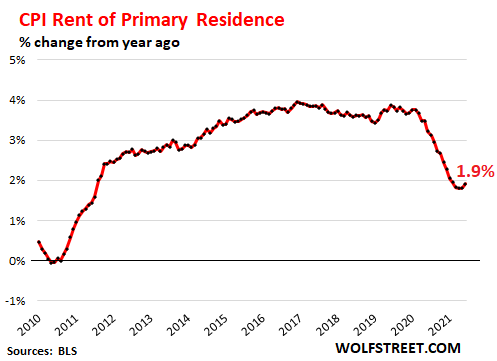 Invitation Homes isn’t going around buying thousands of homes, like it used to do during the housing bust, when it got started. In Q2, it bought 494 houses and sold 212 houses, for a net increase of 282 houses – across the US – which brought its total to 80,612 houses.

But just before the earnings report, it announced that it would buy 7,500 houses over the next five years from PulteGroup, the third-largest builder in the US, following the hot trend of built-to-rent single-family-rentals, where builders build entire subdivisions of houses that they then sell to a landlord.

Invitation Homes and Pulte have already agreed on the first 1,000 houses in seven “communities” to be built in Florida, Georgia, Southern California, North Carolina, and Texas, on the hopes that rent inflation for single-family houses in the suburbs will continue to surge.