Inflation ate my homework: All this stimulus, so little to show for.

This was still strong compared to the pre-pandemic years, but the high expectations got knocked down by spiking inflation that has surprised economists to the upside all year long, record trade deficits, sharp declines in inventories, and a drop in government consumption and investment. 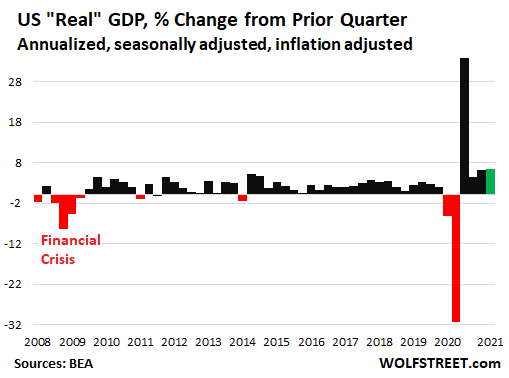 In dollar terms, expressed in “chained 2012 dollars,” real GDP in Q2 eked out a new record of a “seasonally adjusted annual rate” of $19.4 trillion, bypassing for the first time the prior record of Q4 2019: 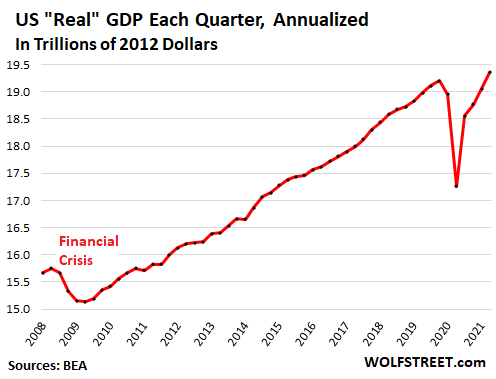 Consumer spending – powered by the $1,400 stimulus checks that started going out in late March, extra unemployment benefits, and all the other government goodies and extras, and by stock market gains and what not – jumped by 11.8% annualized (or 2.8% not annualized) in Q2 from Q1, to an annual rate of $13.7 trillion in chained 2012 dollars, setting a new record for the first time since Q4 2019.

Consumer spending accounted for 70.6% of total GDP in Q2, the highest ever, and the first time ever that it was above 70%. That’s another sign of how much stimulus and other government payments powered consumer spending. 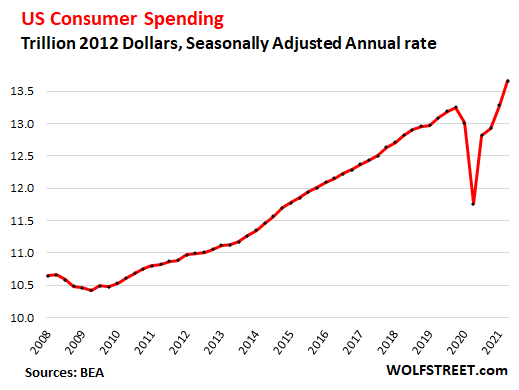 Record Trade Deficit of goods and services, powered by huge imports, powered by massive consumer spending on goods, powered by massive stimulus, dragged on GDP. Exports add to GDP, imports reduce GDP. The balance (exports minus imports), or “net exports,” worsened by 11.2% annualized (or 2.7% not annualized) to a new worst of -$1.26 trillion (annual rate 2012 dollars). This chart is an indictment of rampant globalization by Corporate America: 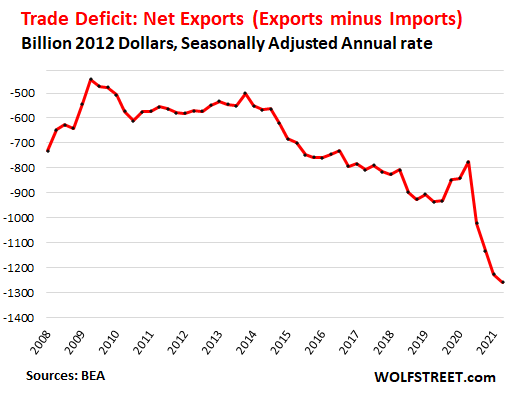 Gross private domestic investment ticked down for the second quarter in a row, by 3.5% annualized (or by 0.9% not annualized) from the prior quarter to a seasonally adjusted annual rate of $3.51 trillion. This decline is a combination of its major category “fixed private investment,” which increased, and the change in “private inventories,” which fell. 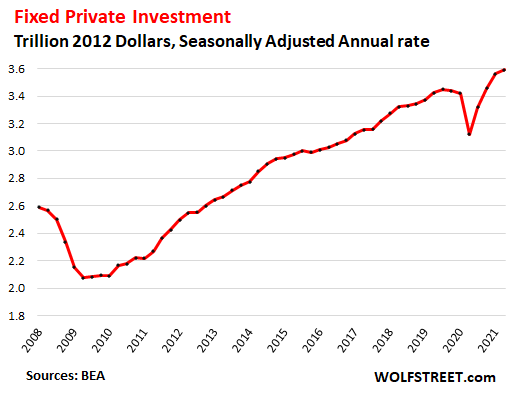 But inventories continued to fall as numerous segments with shortages have cropped up in the economy, particularly at auto dealers, by far the largest segment of the retail industry, accounting in normal times for over one-third of total retail inventories, but where inventories have collapsed over the past few months. Overall inventories dropped another 5.7% annualized (or by 1.5% not annualized) in Q2 from Q1, to $2.8 trillion:

Government consumption and investment ticked down by 1.5% annualized (or by 0.4% not annualized) in Q2 from Q1, to $3.38 trillion (annual rate). This includes what governments at all levels spend on goods and services, such as fuel, supplies, equipment, and rent for offices. And it includes government investments, such as in equipment and infrastructure. 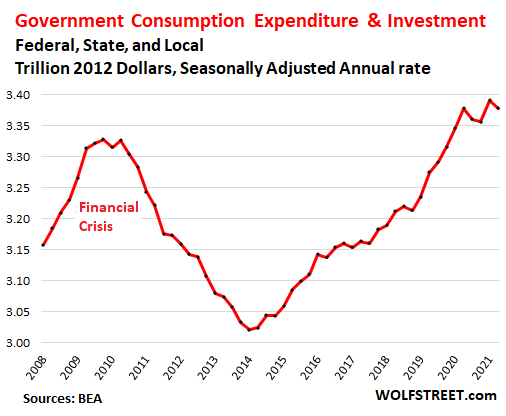