Repos are different from QE; they’re in-and-out transactions that don’t endlessly pile up, unlike QE.

The Fed today followed through on long discussions and announced the establishment of two standing repo facilities: A domestic Standing Repo Facility (SRF) and one for Foreign and International Monetary Authorities (FIMA repo facility). The minimum bid rate is set higher than the market for overnight interest rates, which will discourage counterparties from using the facilities unless pressures are driving the overnight rates higher. Initially, the minimum bid rate is 0.25%.

This is back to the future. The Fed had an SRF that it used for decades as part of its monetary policy tools and to provide instant liquidity to the market when the big S hit the fan, such as during 9/11 and during the early parts of the Financial Crisis – instead of QE. This facility nearly always carried a balance, but of varying amounts, and most of the time, fairly small amounts.

Repos (repurchase agreements) are in-and-out transactions where the Fed buys securities from a counterparty for cash with a contract to sell those securities back to the counterparty at the end of the term and take back its cash. At the time, repos were mostly “overnight” repos, maturing and unwinding the next business day, when the balance goes to zero. Then there might be a new repo of a different amount. What the Fed announced today are also overnight repos.

During a crisis, these repo amounts spiked. After the crisis, the balances fell, and during regular times, the amounts just wobbled along at relatively low levels. Unlike QE, they don’t keep piling up since they’re in-an-out transactions.

But when the Fed started QE during the Financial Crisis, it shut down its Standing Repo Facility.

Then, in September 2019, the repo market blew out – two years after the Fed had started shedding some of its QE assets. At that point, the Fed stepped back into the repo market in a big way until it calmed down in early January 2020.

But as the Fed was starting to wind down the repo balances in early 2020, suddenly all heck broke loose in the financial markets due to the pandemic, and even the Treasury market started going into convulsions, and the Fed opened up its repo vault until it got QE going.

In April 2020, with QE in full massive swing, the Fed raised the minimum bid rate for repos, making them less attractive, and the facility fell out of use, and balances went back to zero by July 2020: 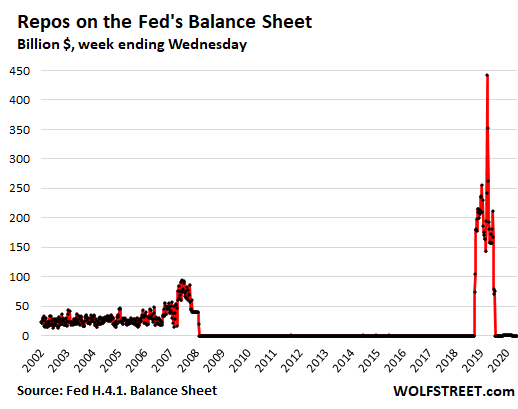 Today’s announcement makes the existing repo facility permanent, and it adds some specifics. Bringing back the SRF is something the Fed has been talking about and writing about for years.

One of those papers was by the Federal Reserve Bank of St. Louis, in March 2019, “Why the Fed Should Create a Standing Repo Facility.” The third reason listed in the paper: The SRF would allow the Fed to reduce the assets on its balance sheet without causing the kinds of problems that suddenly cropped up six months later, September 2019, when the repo market blew out. Very prescient.

Today, in its back-to-the-future moment, the Fed said that the SRF “will serve as backstops in money markets to support the effective implementation of monetary policy and smooth market functioning.” And it allows the Fed to deal with the type of Treasury market convulsion that occurred in March 2020.

Repos are different from QE in that they’re in-and-out transactions. They don’t endlessly pile up, unlike QE. They’re used when the market needs liquidity and is willing to pay for it; otherwise they’re not used or little used.

Under the SFR announced today, the Fed offers to buy Treasury securities, government agency debt securities, and government-backed MBS on an overnight basis, totaling no more than $500 billion, from the primary dealers, later to be expanded to other large banks, at a minimum bid rate of 0.25% initially, which is “out of the money,” as Fed Chair Powell pointed out today.

Under the FIMA repo facility, the Fed offers to buy Treasury securities on an overnight basis from foreign central banks. This allows the foreign central banks to convert their Treasury holdings in custody at the New York Fed into dollar liquidity. The minimum bid rate is 0.25%, with a per counterparty limit of $60 billion. The statement said that this will “help address pressures in global dollar funding markets – the infamous “dollar shortage” – that could otherwise affect financial market conditions in the United States.”

In the future, obviously, the Fed can do whatever it wants. But this looks to me like an effort to get back to a situation where not every run-of-the mill crisis triggers more knee-jerk QE, one bout bigger than the previous one. And it looks to me like some form of preparation to make “balance sheet normalization” work out better next time than last time, which ended in the repo market blowout.