As push came to shove toward the end of the FOMC press conference on Wednesday, Fed Chair Jerome Powell, fidgeting on the hotseat of inflation and struggling with “transitory” and “temporary,” admitted that the recent rate of inflation was “not moderately above” the Fed’s inflation target but “way above target.” Today, the inflation measure that the Fed uses for this inflation target, annual “core PCE,” spiked further.

The Fed uses the “core PCE” inflation measure because it is the lowest lowball inflation measure that the US government provides. It excludes food and energy, which can be volatile, and it is structured differently than the Consumer Price Index, and it is nearly always below “core CPI.”

This Personal Consumption Expenditures price index without food and energy jumped by 0.45% in June, from May, after having jumped by 0.5% in May, 0.7% in April, and 0.4% in March, according to the Bureau of Economic Analysis today. This lowest lowball inflation measure available in the US was up 3.5% from June last year, the highest year-over-year rate since May 1991: 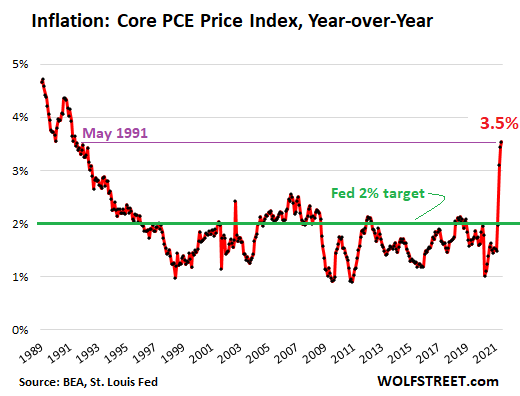 The run-rate of core PCE over April, May, and June, and annualized, was 6.7%, the highest run-rate since July 1982. This shows how fast inflation has suddenly heated up this spring. This is a phenomenon of 2021. There are not that many people still working in the finance industry that have experienced this type of inflation as adults: 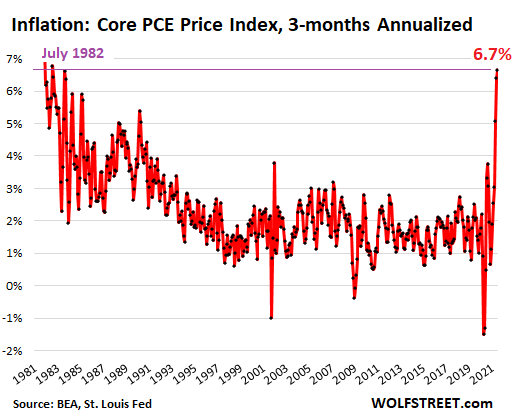 Inflation has surprised the Fed to upside this year. About every three months, the FOMC meeting is followed by the release of “Projection Materials” which show where FOMC members think the economy and inflation are headed. The median projection for core PCE inflation is now way behind reality:

As Powell was getting politely hammered at the press conference over the surge in inflation, and as he was getting pushed to explain what exactly “temporary” and “transitory” mean, even he admitted that there was nothing temporary or transitory in the current inflation: That loss of the purchasing power of the dollar is permanent. Prices won’t go back to where they were, even he admitted.

What is temporary or transitory would be the current growth of inflation, meaning that next year prices might be 6% higher, and that loss of purchasing power is permanent, but inflation might not continue to rise at 6% year-after-year. It might rise 3.9% or 5.8% or 8.4% or whatever. And so each rate is temporary in that sense.