The big shift from durable goods to services is underway.

Some stimulus checks are still straggling into bank accounts, and the extra unemployment moneys from the federal government are still flowing to claimants in about half the states, and that money is getting spent, but all this extra money is a lot less than it used to be, and some stock market gains are also getting spent as part of the Wealth Effect, and employers are having to raise wages to attract people back into the workforce, and wages have ticked up, and that money too is getting spent. People are making a heroic effort to spend. But red-hot inflation is eating it up.

“Real” (inflation adjusted) personal income without transfer payments: Personal income – including income from interest, dividends, rental property, etc. – but without stimulus payments, unemployment payments, and other transfer payments from the government, and all of it adjusted for inflation, was still below where it had been in February 2020, according to the Bureau of Economic Analysis today.

This is a function of how many people are earning money, and of higher wages and higher income from rental properties, etc. But inflation is the insidious counter-force. Adjusted for inflation, real personal income without transfer payments hasn’t improved much in recent months despite many more people getting back to work and despite higher wages, because inflation ate up the increase in aggregate income. Note the pre-pandemic trend line (green): 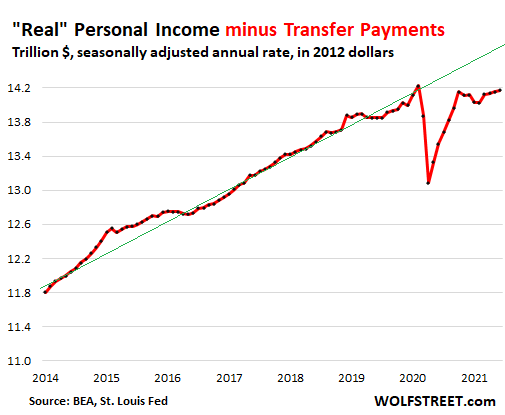 Personal income from all sources, including transfer payments, not adjusted for inflation, ticked up a smidgen for the month and was up 2.3% year-over-year.

But adjusted for inflation, personal income from all sources fell 0.4% in June from May, and was down 1.6% from June last year. The three spikes in the chart reflect the three waves of stimulus payments that created some of the weirdest distortions in the US economy ever. But the stimulus effects are now fading 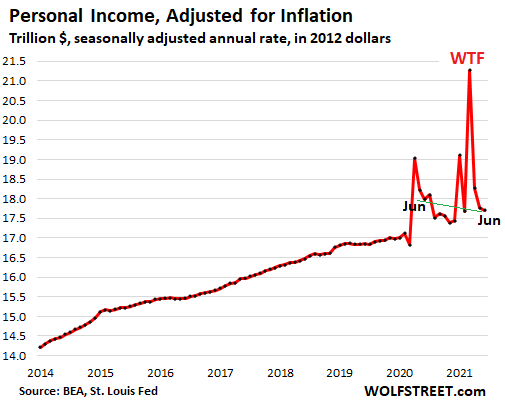 “Real” consumer spending: Inflation ate their lunch. People are trying, that’s for sure. They’re out there spending money hand over fist, but adjusted for inflation, spending hasn’t gone anywhere in four months.

Not adjusted for inflation, spending on goods and services rose 1% in June from July, to a new record.

But adjusted for inflation, “real” spending on goods and services ticked up less than half that, after having dropped in May, and is still below where it was in April: 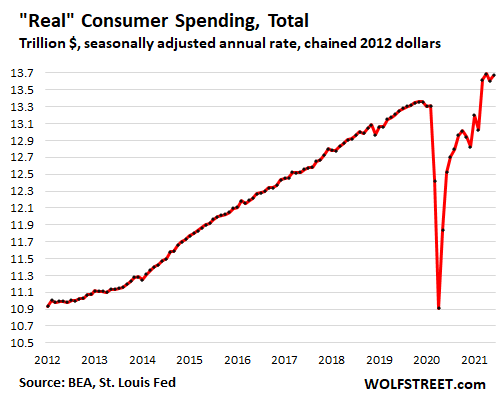 Real spending on services rose 0.8% in June from May, but was still way below pre-pandemic levels. Services include the biggies such as rents, healthcare, hotel and other travel bookings, entertainment and sports events, etc. 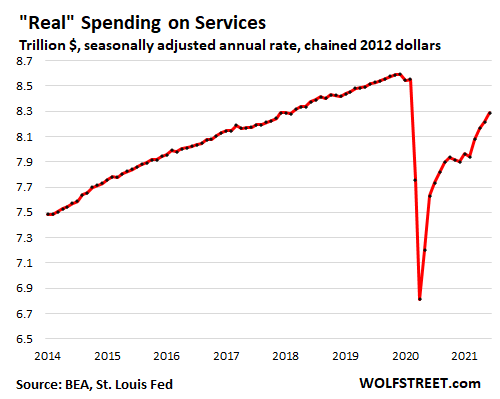 Real spending on durable goods fell 2.5% in June, the third month in a row of declines, after the stimulus-high in March and April. But amid shortages ranging from semiconductors to raw materials, tight inventories, transportation backlogs, and massive price spikes, triggered by sudden stimulus-powered demand, the durable goods business remains at nosebleed levels: 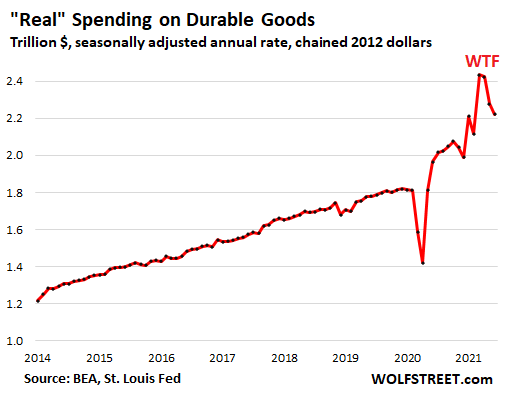 Real spending on nondurable goods rose 1.2%, after two months of declines, but remained below the record in March. These purchases are centered on supermarket items, personal care items, gasoline, etc. Supermarkets in particular benefited during the pandemic as consumption shifted from workplaces and surrounding businesses to the home. And as the phenomenon of working from home continues with energetic persistence, consumption patterns follow: 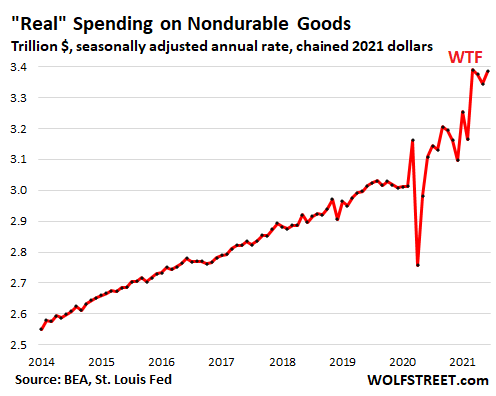 This consumer spending data for June was largely incorporated into the GDP data for the second quarter, released yesterday: All this stimulus, so little to show for. Read… Socked by 6.4% Inflation, Record Trade Deficit, Inventory Shortages, and Drop in Government Spending, “Real” GDP Jumps Disappointingly

255 comments for “People Made Heroic Efforts to Spend. Inflation Ate Their Lunch”