The Everything Shortage keeps promising to keep getting worse.

Amid China’s many crackdowns is a crackdown on energy consumption, motivated by a slew of reasons, including most pressingly, spiking prices for coal and natural gas, particularly Liquefied Natural Gas. China is the second largest importer of LNG behind Japan. As Europe and Asia compete for supply, the price of LNG for November delivery to Japan and Korea has exploded to $27.45 per million British thermal units on the NYMEX, up from the $6-range a year ago (chart via CME Group): 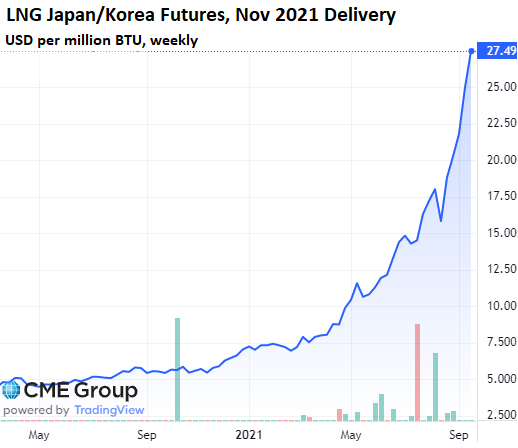 In addition to the spike in energy prices, there are the government’s efforts to reduce emissions and to tamp down on the growth of energy consumption. To that effect, China has imposed a number of policies. The crackdown on bitcoin mining falls into this category.

This crackdown on energy consumption, handed down from Beijing to provinces and cities, is now taking the form of suspensions or reductions of industrial electricity supply that manufacturers in numerous industries are hit with, including key facilities that produce components for Apple, Tesla, Intel, Nvidia, Qualcomm, NXP, Infineon, and ASE Tech, along with many smaller manufacturers. They’re now under orders to temporarily halt production.

On Sunday, Taiwanese companies with manufacturing operations in China disclosed in filings with the Taiwan stock exchange, cited by the Nikkei Asia, that they have to halt operations at some of their plants in China:

Eson Precision Engineering, an affiliate of Foxconn and a key mechanical parts supplier for Apple and Tesla, disclosed in a filing with the Taiwan stock exchange on Sunday that it would suspend its production from Sunday until Friday at its facilities in the city of Kunshan, Jiangsu Province, in response to the city’s policy of stopping electricity supply for industrial use.

“The company will leverage its inventory to maintain the operation while production is halted,” Eson said in the filing. “We expect to arrange production on the weekends or in the upcoming holidays [next month] to meet customers’ needs.”

Unimicron Technology, a print circuit-board maker and Apple supplier, disclosed in filing with the Taiwan stock exchange that its subsidiaries in Suzhou and Kunshan, both in Jiangsu Province, would stop production from Sunday until the end of September. It said it would mobilize production capacity in its other manufacturing sites to mitigate the impact.

Concraft Holding, which makes iPhone speaker components and owns manufacturing facilities in Suzhou, Jiangsu Province, disclosed in a filing with the Taiwan stock exchange that it would suspend production from Sunday through Thursday and rely on its inventory to support demand.

Chang Wah Technology, a leading chip-packaging material maker supplying NXP, Infineon, and ASE Tech Holding, disclosed in a filing with the Taiwan stock exchange on Sunday that it has to halt production from Sunday through the end of the September.

Small and medium-size enterprises have also been hit with the energy consumption crackdown, according to the Nikkei. An electronics supplier in Dongguan, Guangdong Province, told the Nikkei Asia that they had also received notice that their electricity would be cut from September 25 through 28 every day from 8 a.m. to midnight. “We could only ask our production-line workers to take night shifts to rush some products out,” they told the Nikkei.

A broad range of industries has been affected by the energy crackdown, including electronic goods manufacturing, a sector that produces a lot of goods for export.

In the not-yet category:

Pegatron, which assembles iPhones and operates large production sites in Suzhou and Kunshan, Jiangsu Province, told the Nikkei that its facilities were running as usual at the moment, but had already prepared power generators in case it receives the notice from the city government.

Foxconn’s vast manufacturing plants in Longhua and Guanlan (Guangdong Province), Taiyuan (Shanxi Province), and Zhengzhou (Henan Province) had not yet been hit by the restrictions on power consumption “as of Sunday,” according to sources cited by the Nikkei.

Foxconn’s plant in Zhengzhou, employing about 350,000 workers, produces about half of the iPhones in the world. The area was already hit by flooding in July that halted production, and industry observers at the time speculated that the flooding would delay the production of Apple’s new iPhone 13 series.

So we will see if there are additional ripple effects of those production halts.

When supply chains are already in trouble, with shortages spreading across a wide variety of unlikely products and components, made worse by natural disasters in the US, China, and other countries, and made worse by Covid infections in Malaysia and Indonesia that have shut down manufacturing plants, every little thing adds further distress and entanglements. And this comes at the worst time, just before the holiday shopping season, amid blistering demand from the most grotesquely overstimulated economy ever in the US.