But who’s buying? CEO Adam Aron is schmoozling and bamboozling the Reddit crowd.

There has been a paradigm shift: As of now, it would be no big deal for AMC Entertainment, which lost $4.6 billion in 2020, if Americans don’t go back to the movies to the extent they did before – I mean, why would they, with the big screens and fancy sound systems and cheap popcorn they have at home and the limitless choices they have via their streaming services? It would be no big deal because AMC is now in the business of selling its own shares and riding the meme-stock crazy-train.

While CEO Adam Aron is schmoozling and bamboozling the Reddit crowd, insiders and executives are dumping their shares hand over fist.

Gary Locke, a member of AMC’s Board of Directors, is the king of share sales in terms of the portion of his stake that he dumped on Thursday: 63.7% of his holdings, according to SEC filing on June 4. He obtained on average $49.82 per share for the 34,293 shares he sold, walking away with $1.71 million.

And the Reddit crowd gobbled them up. During the first four trading hours on Wednesday, AMC shares had more than doubled to briefly hit $72.62, which was apparently an irresistible once-in-a-lifetime opportunity for the executives and directors to dump their shares. A few months ago, AMC shares were at $2.

AMC ended Friday in afterhours trading at $43.72. So Locke had timed his sale very well.

Locke knew what he was doing. The former Governor of Washington State served as Ambassador to China from 2011-2014, the time frame during which Dalian Wanda Group, a Chinese conglomerate, bought a controlling stake in AMC. And Locke became Wanda’s man inside AMC in 2016. But he is up for reelection next month, and with Wanda out of the picture – it had sold nearly its entire stake earlier this year – he is likely outa there.

Carla Chavarria, Senior VP and head of human resources, dumped 47.7% of her stake on Thursday, selling 40,346 shares for an average price of – yes, wow, drumroll, superb timing – $62.67 a share, according to the SEC filing on Friday, walking away with $2.53 million.

You can see some of the SEC insider data right here on WOLF STREET by clicking on the stock symbol [AMC] and scrolling the down the page until you get to the 13-F filings and the insider trades (this works for all stocks discussed here).

Combined the nine executives and directors sold nearly $10 million in shares since mid-April; they sold 293,000 shares, or 31.6% of their combined holdings.

John McDonald has three sales on this list and Daniel Ellis has two. The “% stake sold” reflects those sales compared to their stakes before April 16. If your smartphone clips the seven-column table, hold your device in landscape position:

CEO Adam Aron is not on this list. He has serially vowed that he hasn’t sold his shares, which the Reddit crowd ate up. He has not discussed if he uses hedging strategies, such as swaps, to protect his gains. He is playing the Reddit crowd for all it’s worth, rubbing shoulders with them, teasing them, joking with them.

The biggest seller of all has been Dalian Wanda Group. The marvelous crazy-train that started to pick up momentum earlier this year drove AMC shares into the double-digits, from the low single-digits, after the company had floated the idea late last year that it might have to file for bankruptcy, and Wanda was already toying with the corollary that it would end up holding a big empty bag.

But as share surged starting in January, Wanda started unloading its stake in massive piles to the Reddit crowd. And it’s outa there.

AMC itself has been selling shares in waves as well, recently at huge prices, raking in over $2.2 billion, seven share offerings since last summer. The latest came on Thursday, after AMC’s share price had spiked to $72 on Wednesday. While the executives and directors were busy dumping their shares, AMC also sold shares. That just looks awful.

I can imagine that on Thursday in the Zoomified C-suite, no work at all got done beyond of selling shares and jubilating.

When the share offering was announced after the executive had unloaded their shares, shares began to dive. The offering came with one of the starkest warnings and biggest CYAs ever: Don’t Buy our new shares “Unless You Are Prepared” to lose “all or a substantial portion of your investment.” AMC ended up selling $587 million in new shares. And it’s planning to sell a lot more.

Share sales are diluting existing shareholders. But who cares? Dilution only matters to earnings per share, and those earnings per share were a huge loss of $39.15 per share in 2020, and given the stress the brick-and-mortar theater business was in and will be in going forward, diluting those shareholders means mathematically reducing the “losses per share.”

Whatever the looks of it, reality is that the $2.2 billion raised from those share sales will allow AMC to continue to burn cash and hobble along and pay its creditors for a while longer. When AMC runs out of cash to pay its creditors – a fate it was contemplating last fall as it discussed a possible bankruptcy filing – that’s when the gig would be up for shareholders.

But that’s not happening as long as CEO Aron can schmoozle and bamboozle the Reddit crowd into buying its shares at these big-fat crazy-prices while the insiders are unloading. No movie theaters required. Just hand out free popcorn and sell the shares.

Since the WTF moment on Wednesday, shares have plunged 39% to $43.72 Friday afterhours, but they are still well above where they’d started out Wednesday morning, which shows just how crazy this stuff is (data via Investing.com): 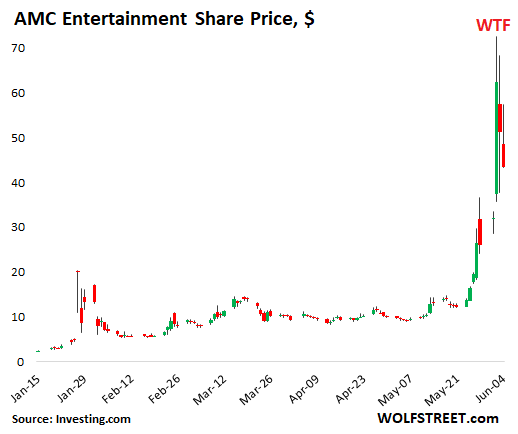 141 comments for “AMC Insiders Dumped Huge Portions of their Shares after WTF Spike, AMC Sold Shares, and Wanda is Already Outa There”