I’m in awe of how a tiny automaker with less than 1% global market share is a Supernatural Phenomenon and the 7th most valuable US stock.

Let’s get this straight: Tesla is led by a CEO who is regularly seen walking on water, and its shares are a supernatural phenomenon. Today, those shares, trading for the first time after the 5-for-1 split, surged from $442.61 at the open to $498.32 at the close and then on to $514.74 after-hours at the moment. That’s a 16.3% ride in one day, following weeks of supernatural moves into the heavens. 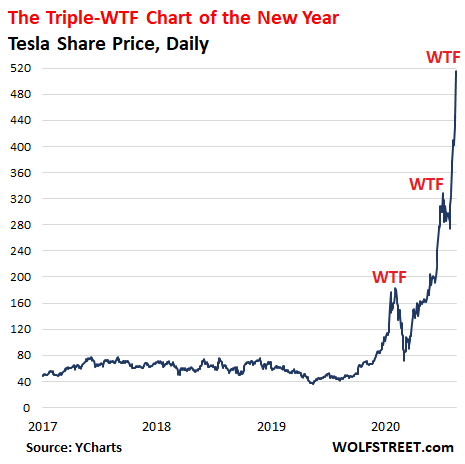 The stock split did the job, based on the logic that a five-dollar bill broken into five ones makes each of those ones suddenly worth $1.16 — or $1.87 if you start counting since the announcement of the split on August 11. I mean, it’s just pure supernatural, and if you don’t get it, too bad, it’s a sign that you just don’t have the right stuff.

Back on July 1, Tesla surpassed Toyota as the most valuable automaker in the world. At the time, Tesla traded at $226 a share ($1,130 pre-split). Since that propitious date two months ago, Tesla has skyrocketed another 127%.

At the time when it blew past Toyota, the value that the market put on Tesla (outstanding shares times share price) was $210 billion, which was – and I mean was – a huge number. Now, after-hours, Tesla’s market capitalization, according to YCharts, is $476 billion.

If you have to ask, “value created by doing what,” then you don’t have the right stuff. Simple as that.

Tesla’s shares are now valued at about 20 times annual revenues. You see what I mean? If you have to ask, you don’t have the right stuff.

In terms of market cap, this makes Tesla the seventh most valuable US company – not counting Alibaba. BABA is an ADR listed in the US, not a common stock; it represents a mailbox company in the Cayman Islands that has a contract with the Chinese company Alibaba.

So here are the seven US companies with the highest market capitalization:

I’m not going to even try to outline the factors that make Tesla’s stock a supernatural phenomenon – things like Tesla, the minuscule automaker with a global market share of less than 1%, isn’t actually an automaker with stagnant revenues in a long-term stagnant or declining industry, but a data company with a secret government contract to populate Mars or whatever. You just have to put your brain on Tesla Autopilot and believe in it.

Tesla’s share of the EV market in Germany plunged to 8.7% year-to-date, from 18.4% last year. Competition is now huge and across the spectrum. Tesla faces the same situation globally. Read…  Tesla Gets Crushed in Germany by EVs from Volkswagen, Renault, and Hyundai Group: It Woke Up the Giants

233 comments for “Tesla, the Triple-WTF Chart of the Year: Just Put Your Brain on Tesla Autopilot and Believe in It”