The theme of renters getting out of the most expensive cities is now everywhere. They might retreat to mon and dad’s house to work from home or flee to a cheaper town, or finally buy a house in the suburbs or even out in the country, or whatever. These themes are running around all over the place, often with not a lot of data to back them up at this early stage. But one thing is happening: Rents are dropping like a rock in some of the most expensive cities. And they’re surging in others.

In San Francisco and New York City, rents plunged in August from July at a historic rate, and are now down about 20% from their peaks. Rents dropped in many expensive cities, and in college towns, and in Texas, the largest oil producing state in the US, where the oil bust is amplifying the issues of the Pandemic.

But there are 18 other cities, mostly those that are a lot less expensive, where rents are soaring by the double digits – confirming that there are some big shifts underway.

The median asking rent for one-bedroom apartments in San Francisco plunged by 5.0% in August from July, to $3,040. This brings the decline since May to nearly 10%, and the 12-month decline to 14.1%, according to data from Zumper’s Rent Report. From the peak in June 2019 – which had passed by a hair the prior record of October 2015 – the median asking rent for 1-BR apartments has plunged 18.3%.

As in so many things, this drop had started before Covid, but Covid is speeding up the process. Homeowners and investors in San Francisco are also trying to get out, and “pent-up supply” has turned into a record glut of homes for sale.

Peak-rent in San Francisco occurred in October 2015. Rents then dropped by about 10% over the next 18 months or so before the “Trump bump” fired up the whole situation again, and rents rose. 1-BR rents touched their October 2015 peak in June last year, but 2-BR rents never got close. That “Trump bump” has now been unwound two-fold.

As the “shelter-in-place” restrictions were lifted in New York City, new leasing activity started perking up two months ago – but at much lower asking rents. The median asking rents fell sharply in August from July for both 1-BR apartments (-4.9%) and 2-BR apartments (-5.0%), amid surging rental vacancies that in July reached the highest rates since at least the Great Recession, according to appraisers Samuel Miller Inc. Rents compared to August last year were down about 11%. And they were down 20% and 23% from their respective peaks in 2016.

The table of the 17 most expensive major rental markets by median asking rents, based on Zumper’s data, shows August rent, the change from August last year, and in the shaded area, peak rent and change from the peak. Seattle, where rents are now down about 15% from their peak, used to be one of the hottest rental markets in the US! Chicago and Honolulu have experienced the largest declines from their peaks in 2015. But in recent months, they seem to have found a bottom. 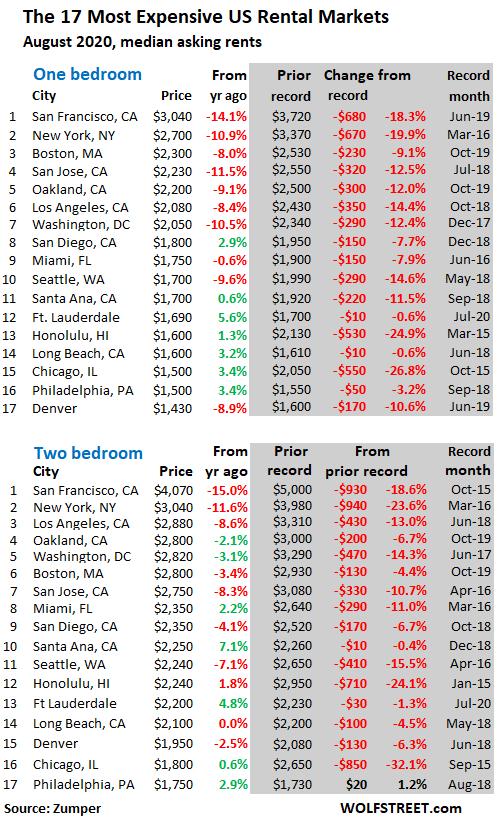 What are “median asking rents?”

“Median” means half of the asking rents are higher, and half are lower. “Asking rent” is the advertised rent, which measures the current market rents, similar to a price tag in a store. Asking rent does not measure what tenants are currently paying in rent, such as under rent control. Asking rents do not include concessions. More on that in a moment.

These median asking rents are only for apartment buildings, including new construction, but do not include single-family houses, and condos-for-rent. The data is collected by Zumper from over 1 million active listings, including from Multiple Listings Service (MLS), in the 100 largest markets.

Rental concessions soar but are not included in median rent.

“Rental concessions on listings are now nearly twice as common as they were in February, as landlords strive to attract new tenants in a rental market that has softened considerably since the coronavirus pandemic took hold,” Zillow reported today, as the percentage of rental listings with concessions jumped from 16.2% in February to 30.4% in July.

According to Zillow, 91% of the incentives are for free rent, with the median amount offered being 6 weeks. That translates into a discount of 11.5% for the first year. This discount is not included in asking rents. The chart by Zillow shows the percentage of listings with rental concessions across the US: 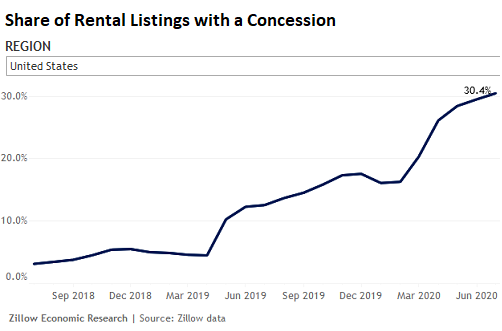 The percentage of listings with rental concessions in the San Francisco-Oakland-Hayward metro reached 41.2% (San Jose-Sunnyvale-Santa Clara metro similar at 40.1%): 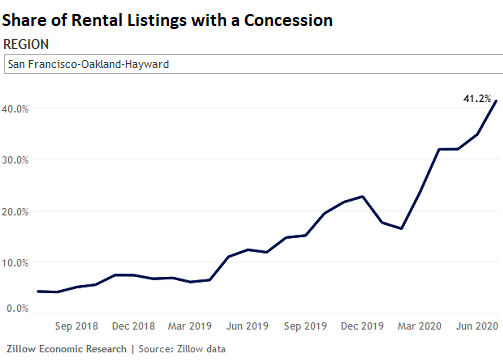 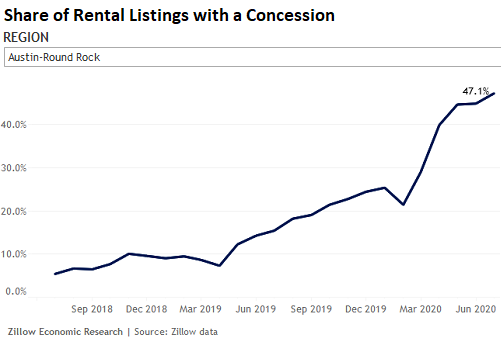 The cheapest city to rent among the top 100 rental markets is Akron, OH, where the median asking rent for a 1-BR apartment was $580 in August, unchanged from last year. In San Francisco, that apartment would be five times as expensive! Tulsa is second in line, at $650. And there are some big gainers in this group, including Detroit, where the median asking rent in August jumped 15.6% year-over-year:

The 33 Cities with year-over-year declines in 1-BR rents.

College town Syracuse, NY, led again with a year-over-year decline in August of 15.8% for 1-BR rents, followed by San Francisco (-14.1%) and by San Jose (-11.5%). The table below shows the 33 cities among the top 100 markets with year-over-year rent declines in August for 1-BR apartments. The list includes big overpriced cities, startup unicorn meccas, college towns, cities in the oil-bust region, and others:

The 31 Cities with 5%-plus year-over-year increases in 1-BR rents.

Of the largest 100 markets, 62 cities had year-over-year rent increases in August, compared to 33 cities with declines.

The table below shows the 31 cities with rent increases of 5% or more. In 18 cities, rents increased by the double digits year-over-year. But this was down from 23 cities in July. In 10 of these cities, rents spiked by 15% or more. None of these cities with double-digit rent increases are expensive markets – in quite a few of them, the median asking rent is less than one-third of what it is in San Francisco:

There are two sides to a price move, that’s what makes a market.

In expensive markets, such as San Francisco and New York City, where rents have been dropping at steep rates, and vacancies are rising, as people are leaving, landlords are getting nervous. This comes on top of the eviction bans landlords have to grapple with.

But renters who have been bled dry by high rents over the past years now are looking for “free upgrades,” meaning shopping for a nicer apartment at the same rent, or perhaps even a lower rent. This sort of reshuffling up the scale without paying more is now a thing in cities like San Francisco. Lots of people are doing it.

And in markets were rents are now soaring by 5% or 10% or 15% a year, renters are going to feel the pain. These kinds of rent-increases are not sustainable. The market will run out of renters willing to pay those asking rents because rents are outrunning wages – of the lucky ones that still have wages – and even all the stimulus money isn’t going to sustain those kinds of rent increases.

The table shows 1-BR and 2-BR median asking rents in August and their year-over-year changes. The cities are in order of the dollar-amount of 1-BR rents. You can search the list via the search box in your browser (if your smartphone clips this 6-column table on the right, hold your device in landscape position):