Office construction projects all over the US are facing a new reality: the shift to working remotely and the accompanying office glut. Now, 15 months into the Pandemic, the rate of office occupancy, as measured by workers showing up at the office, remains dismally low.

Office occupancy in the week through May 19 was only 28.1% on average in the 10 largest metros from where it had been before the Pandemic, Kastle Systems, whose electronic access systems are installed in thousands of office buildings in the US, reported today.

Meaning, the number of office workers entering buildings equipped with Kastle access systems is still down by 71.9% from pre-Pandemic levels and hasn’t significantly risen since November last year: 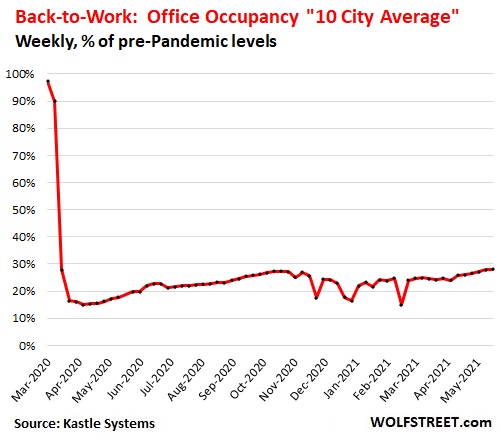 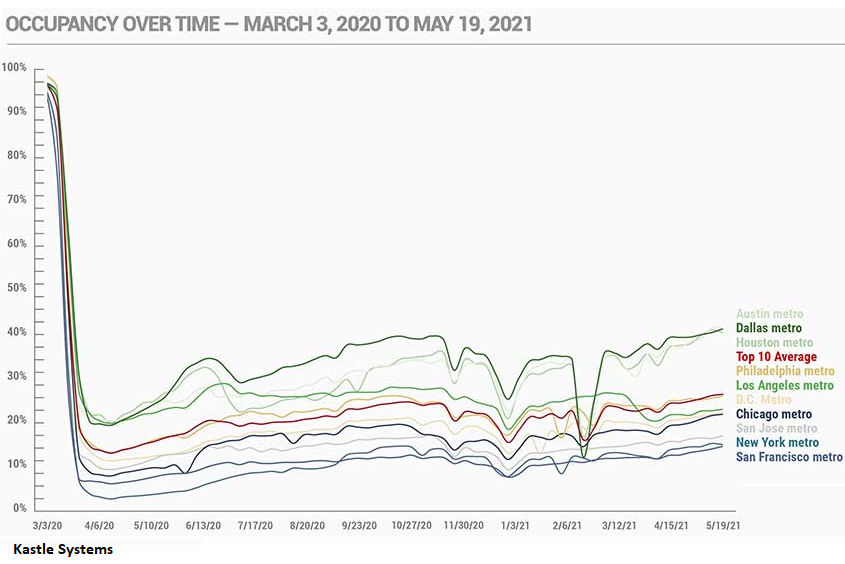 Office occupancy will gradually improve. But to what extent?

“Flexibility” is now a key word for companies, and they have outlined work models that range from near-total work-from-home to hybrid plans that allow for some work-from-home. Many of the companies have downwardly revised their office footprint requirements – hence the huge amount of vacant office space that companies, such as Airbnb, have now put on the sublease market.

And San Francisco, with its large portion of tech workers, is on the forefront of the shift to working remotely, and even its biggest employers, such as Salesforce and Uber, have jumped on the hybrid bandwagon and have put vacant office space on the sublease market. Now, San Francisco has a historic office glut, with nearly 24% of its total office space available for lease.

Which makes the future of the Oceanwide Center, the Chinese mega-construction project on First Street and Mission Street, across the intersection from the Salesforce Tower, that much more troubled.

Property developer Oceanwide, a division of Chinese conglomerate Oceanwide Holdings Co. Ltd., acquired the project in 2015 and started construction in 2016. The plans call for two towers, 2 million square feet of space, and a mythical price tag of $1.6 billion.

But in 2019, construction was halted on the shorter of the two towers, the 54-story tower on Mission Street, when it reached grade, amid doubts about its commercial viability. It was supposed to contain condos and a Waldorf Astoria.

In 2020, construction was halted on the taller tower, located at 50 First Street, which was supposed to become the second tallest tower in San Francisco, after the Salesforce Tower. It was going to include 34 floors of office space, 19 floors of condos, and a six-story-tall open-air space at the bottom for the public.

And this is the view of what is supposed to become the second tallest tower in San Francisco, four-and-a-half years after groundbreaking. The shiny object in the center background is the Salesforce Tower. But at least the huge holes have been filled (photo by Wolf Richter, May 24, 2021):

In January 2020, Oceanwide disclosed in a regulatory filing in China that it had made a deal to sell the project to SPF Capital International, an affiliate of Beijing-based SPF Group, for $1 billion, and that it would take a $276 million loss on the $1 billion sale. After that deal fell through, another Chinese outfit, Hony Capital stepped in as buyer. But after several missed deadlines, that deal also failed to close.

This is not just a temporary pause in construction. Nearly all construction equipment is gone. At the moment, there is only one crane left on the project. The other crane was taken down and removed.

But someone made money on the project. The land was acquired out of bankruptcy court in 2013 by TMG Partners and Northwood Investors for $122 million. They hired architects and came up with a new design, and in 2015 sold the whole kit and caboodle to the Chinese conglomerate Oceanwide Holdings for $296 million.

Shortly after construction began in 2016, China began tightening capital outflows in a series of regulations that culminated in August 2019 with the imposition of new capital controls that specifically targeted investments by Chinese entities in foreign real estate projects.

Chinese authorities were also cracking down on the domestic and foreign adventures of highly-indebted conglomerates, such as HNA, which in early 2021 entered bankruptcy in China, and Anbang, which was taken over by the Chinese state.

Given the gloom of the San Francisco office market, and the legal issues that the project is now tangled up in, and the apparently hopeless financial situation, and the developer’s difficulties in China, it appears likely that San Franciscans will have to live with this ulcer of a dead construction site “indefinitely,” as they say.