“Wiring money overseas is not allowed for the purposes of purchasing real estate or insurance products”: banker in China

China’s State Administration of Foreign Exchange (SAFE) has rolled out a new set of currency controls to crack down on capital flight from China to other countries, particularly targeting real estate investments by Chinese individuals and companies. This new set of currency controls include limits for real estate investors that make raising funds via foreign currency debt nearly impossible and stricter oversight of China’s banks that handles these transactions.

These new rules regarding the banks kick in when SAFE declares the financial situation in China “abnormal,” which would then allow SAFE to crack down on outflows via the banks. But according to the Nikkei Asian Review, SAFE had not revealed what criteria will be used to classify the situation as “abnormal,” and fund transfers overseas locations could be blocked at SAFE’s whim.

When SAFE deems the situation “abnormal,” banks come under greater scrutiny and will be graded on the amount of yuan they wire to other countries and the amount of foreign currency they sell. If they get dinged for too much of this type of activity, SAFE may impose limits on their other banking activities.

In addition, the agency has ordered banks to obtain more documentation before processing fund transfers to other countries. For example, parents wanting to pay for school expenses for their kid in the US must submit an acceptance letter from the US university. For other types of fund transfers to other countries, different types of documents must be presented to the bank, such as work permits.

The idea appears to be to allow Chinese citizens to go overseas and do normal things, such as working or studying, but not invest in foreign real estate.

“Wiring money overseas is not allowed for the purposes of purchasing real estate or insurance products,” a representative at a second-tier Chinese bank told the Nikkei.

The declining value of the Chinese yuan against foreign currencies has made it even harder for these companies to service their foreign-currency debts. And the yuan has had quite a ride.

The National Development and Reform Commission, cited by the Nikkei, told these real estate developers that they now can only issue foreign-currency-denominated debt with a maturity of one year or less, and only to refinance existing debt, but not to raise new funding. This will essentially prevent these companies that are already overburdened with debt from funding new foreign real estate investments.

China’s foreign exchange balances have been relatively stable — $3.1 trillion in July 2019 — since the panic of 2015-2016 when the reserves plunged by nearly a quarter from $4 trillion to close to $3 trillion, and that capital flight was halted by capital controls put into effect at the time (chart via Trading Economics): 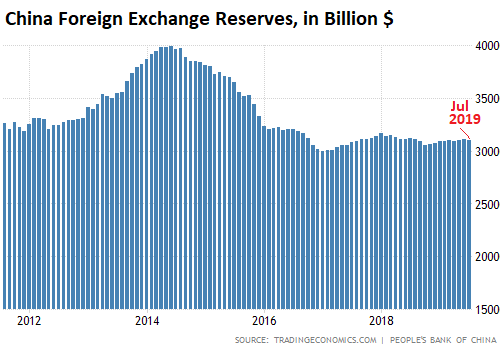 The year 2016 – when a lot of panicked currency controls were being rolled out – was also the year of peak real estate buying by Chinese entities in the US. In terms of home purchases by buyers from China and Hong Kong, they plunged 58% over the past two years to $13.4 billion for the 12-month period through March 2019, according to a recent report by the National Association of Realtors.

In Australia, declining home purchases by Chinese buyers are said to have contributed to the rout in home prices in Sydney and Melbourne.

Similar dynamics have played out in Vancouver, BC. But the BC government has also tried to slow the influx of money from foreign nonresident investors for the past two years via various tax policy changes, and is now trying to lift the covers on money laundering via real estate.