“More than C$7 billion in dirty money was laundered in B.C. in 2018, hiking the cost of buying a home by about 5%, according to British Columbia’s Expert Panel on Money Laundering in Real Estate.”

Canadian real estate is a giant washing machine, confirms the British Columbia government. The province’s Attorney General office released a new report yesterday. The report estimates the amount of laundered cash in the real estate market to be in the billions last year. Considering last year was slower than usual, it represents a good chunk of all sales.It starts out this way:

More than C$7 billion in dirty money was laundered in B.C. in 2018, hiking the cost of buying a home by about 5%, according to British Columbia’s Expert Panel on Money Laundering in Real Estate.

The estimated amount of money laundered cash to hit BC last year is jaw dropping. The paper estimates $7.4 billion flowed in B.C. in 2018, with $5.3 billion going to real estate. For context, this is the size of all transaction dollars for Toronto, this past March. The paper also mentions the model would underestimate if not all funds are included. Since it’s hard to measure illicit cash, this number is likely much higher. It only gets more shocking from here.

Laundered Cash Could Have Fueled 4.6% of BC Real Estate Purchases

The paper doesn’t make any estimates on how many homes that would represent. Using some basic averages though, it’s pretty f**ked up. Using the average sale price, it works out to 3,604 homes if distributed like all investment. If solely invested in residential, it  would work out to 4,152 homes. Not an insignificant amount.

If Only In Lower Mainland, It Equals 7.4% of Purchases

The paper also gives an estimate if this money only hit Lower Mainland, a.k.a. Greater Vancouver and Fraser Valley. The $5.3 billion would represent 7.4% of Lower Mainland residential transactions last year. Since the panel used assessment data, the total transaction volume is higher than the MLS. You, I, and your neighbor would most likely buy a home through the MLS.

If all transactions involved Realtors, the ratio would actually be much higher. The paper doesn’t dive into this, but assessment transactions include non-market purchases. Consequently, the assessment transaction numbers are ~93.6% higher than MLS only volume. If the money exclusively went through Lower Mainland MLS systems, it would be ~14.2% of total dollar volume. Considering residential comps are based on the MLS, the biggest impact would be made here as well. If you were integrating your laundered cash, would you make non-market purchases? Probably not, but you never know.

Depending on how this money was funneled, the impact could be greater than even estimated. We’ve dived into how real estate prices are influenced by money laundering before. That was with just a few purchases. Now we’re talking about a lower estimate of 4.6% of transactions across BC, and up to 14.2% in Lower Mainland.

The price of a “typical” home in Greater Vancouver, and Lower Mainland. British Columbia. The period of estimated money laundering is highlighted for context. 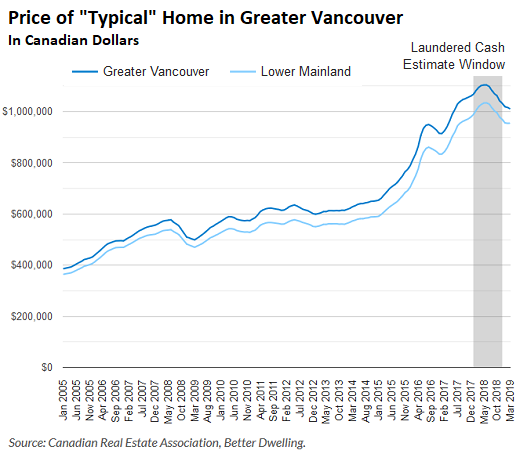 More important to the average real estate buyer, is who provides the liquidity? The end goal of money laundering isn’t to purchase a home, but to layer transactions for clean cash. Right now we have an estimate of the amount of money that went in over a single year. However, we don’t have an estimate for how much of this cash has come out clean. Good thing real estate money laundering magically stops at the border of BC, otherwise Canada might have a problem. By Stephen Punwasi, Better Dwelling.

Money laundering in Canadian real estate is a widely accepted fact of life these days, but the impact isn’t. Read...  How a Little Money Laundering Can Have a Big Impact on Real Estate Prices

39 comments for “Veil Over Money Laundering in Real Estate Lifted in BC, Canada”