Here’s Where Americans Suffer Hot Inflation, But There Are Cool Spots Too

This is something the people in the San Francisco Bay Area have figured out a long time ago: The national inflation numbers don’t quite measure up to local realities.

The Bureau of Labor Statistics reported today that the national Consumer Price Index for all urban consumers (CPI-U) rose 2.0% in April compared to April last year, the highest rate since November. The BLS also releases CPIs for the 14 largest Metropolitan Statistical Areas (MSAs) And there are large differences, from hot inflation of 4.0% in the San Francisco-Oakland-Hayward metro to much cooler 0.8% inflation in the Chicago-Naperville-Elgin metro. The red bar indicates the national average for April: 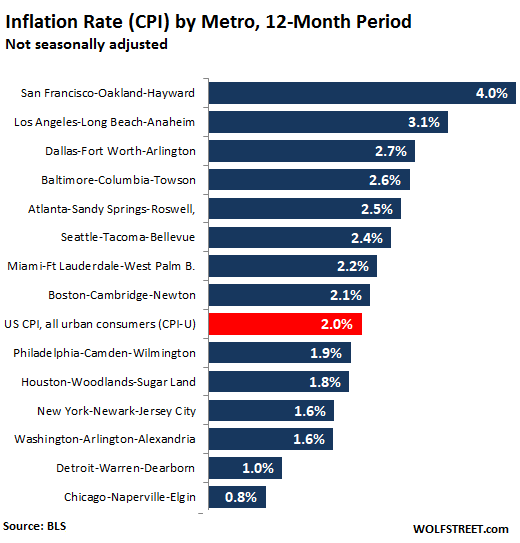 The two metros with the highest inflation rate are both in California. But note that the Dallas metro is in third place. At this rate, inflation rose five times faster in the San Francisco metro than in the Chicago metro.

In the San Francisco metro, the CPI category of “food away from home,” such as at restaurants, jumped 7.6% from a year ago and tuition jumped 10.6%. Motor fuels jumped 9.5% and the people were getting restless to where Governor Newsom, blaming potential “inappropriate industry practices,” asked the California Energy Commission for an analysis of gasoline prices by May 15. There are no oil pipelines across the Rockies, so gasoline prices in California depend on other dynamics than those in Texas, and there have always been rumors of “inappropriate industry practices.”

But the biggie in terms of inflation because that’s where consumers spend most of their money is the index for services, which rose 4.3% in the San Francisco metro.

No matter how you look at it, the rate of inflation in the San Francisco metro is way above the Fed’s target, reaching to 4.5% late last year, and forceful monetary tightening would be highly appropriate for the metro (chart via BLS): 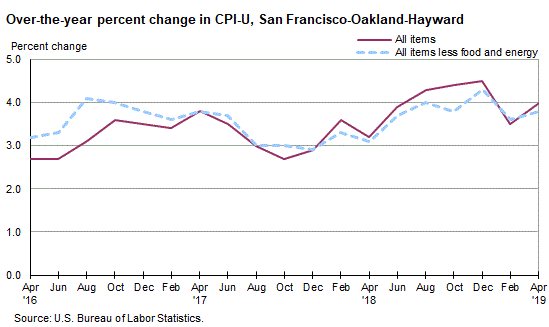 The CPI for the Chicago metro, for much of the past two years, has been wobbling around 2%. But in October last year, it started zigzagging down. The CPI without food and energy (blue dotted line) in the Chicago metro rose only 0.4%. A big factor is the index for services, particularly the sub-index for services without health care, which dropped 1.7% from a year ago helped pull down the overall index. The index for motor fuel rose 5.4% (chart via BLS): 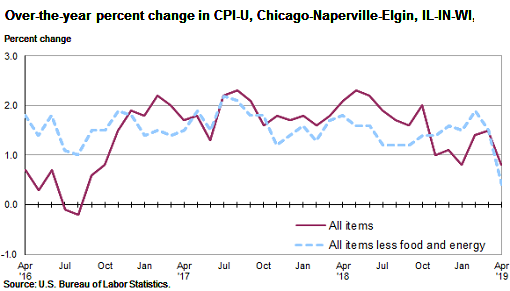 The CPI for the Los Angeles metro had been above 4% for part of last year, and after a brief dip late in the year and early this year has moved back up to 3.3% in April and appears to be heading back to 4%. The index for services rose 4.1% year-over-year, motor fuel 10.8%, food away from home 5.0% (chart via BLS): 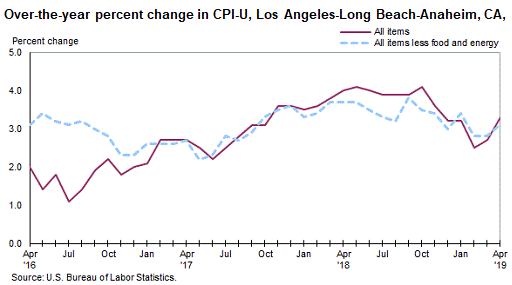 The CPI for Dallas-Fort Worth-Arlington nearly hit 4% early last year before tumbling to just above 2%, but that was clearly “transitory,” as Fed Chair Jerome Powell promised. In April the index was back at 2.7% and heading higher. Of note, compared to our prior entries, the index for motor fuel rose only 0.2% year-over-year, but the index for services rose 3.5%: 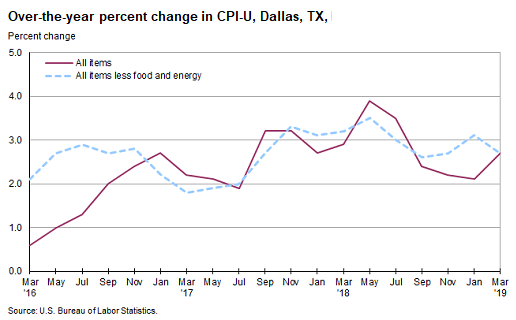 The CPI for the New York-Newark-Jersey City covers a vast and very diverse area, with some serious hotspots and some cooler areas. But averaged out, the CPI for the metro in April rose just 1.6%, with services up 2.3%, and motor fuel up only 0.8% (chart via BLS): 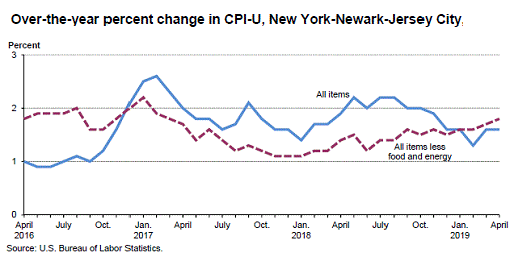 For some of these MSAs, the BLS releases monthly data. For others it releases data every other month. So most of the CPI data here are April-to-April comparisons but for the metros of Dallas, Boston, and Washington DC the comparisons are March-to-March.

The regional CPIs fall as you would expect after seeing the differences above, from hotter in the West and cooler the Midwest (here’s a map showing which states are included in these regions): 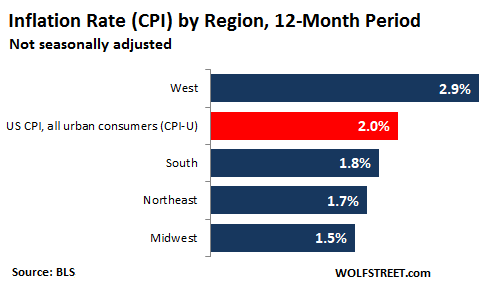 So it’s tough finding the right monetary policy for the whole country, when some areas, such as the San Francisco metro would need fairly harsh rate hikes that would push the federal funds rate above the rate of local inflation, and by a good margin, so about 5% — double where rates are today. But other areas might find the current monetary policy just right.

87 comments for “Inflation by City, from Hot to Cool, from San Francisco to Chicago”