Straggler behind the Fed and the ECB gets the drift.

Total assets on the balance sheet of the Bank of Japan at the end of April ticked up from March but were flat with the record in February: ¥562 trillion ($5.1 trillion). This amounts to a gigantic 102.2% of nominal GDP. But the BOJ has been tapering its asset purchases since peak QE at the end of 2016, and the growth has slowed to a snail’s pace, by Abenomics QE standards.

Despite the BOJs repeated promises of adding ¥85 trillion to its balance sheet every year, the BOJ hasn’t done that since peak QE in 2016 when it added ¥93 trillion. The additions have consistently decreased since then. Over the 12 months through April, it has added merely ¥27 trillion, the lowest 12-month increase since early days of ramping up Abenomics in March 2013. This amounts to a stealth taper: 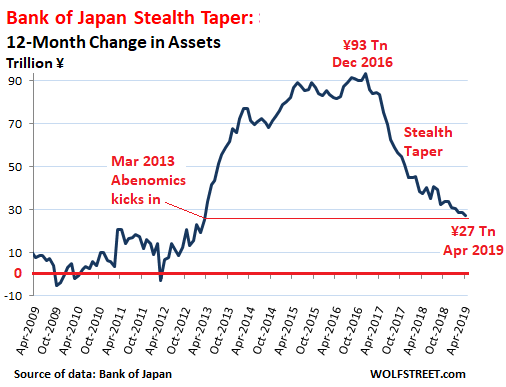 Meanwhile, the government of Japan has been borrowing and issuing new debt with reckless abandon, and the gross national debt outstanding has ballooned to ¥1.12 quadrillion, or 203% of nominal GDP (measured in yen).

These massive purchases of Japanese government securities, and to a lesser extent, the purchases of corporate bonds, equity ETFs, and Japan REITS, have created this enormous balance sheet, but note the flattening spot at the top, a result of the stealth taper: 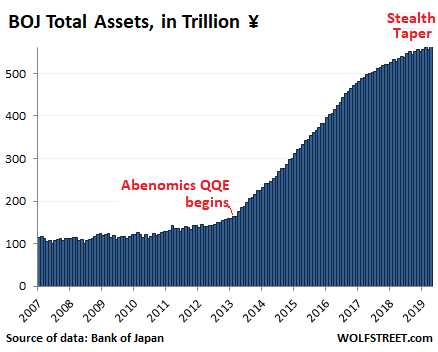 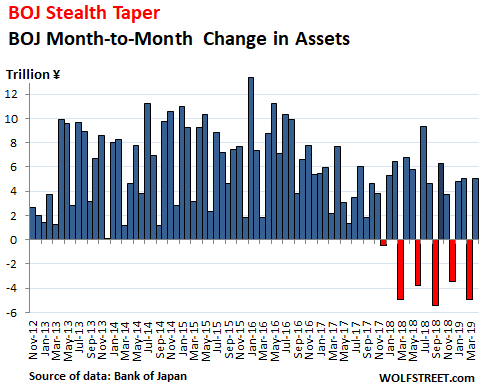 To smoothen out this volatility of the balance sheet and delineate the trend of the stealth taper more clearly, I converted that above data of month-to-month change into a rolling three-month average. The addition in assets over the past six months was ¥1.7 trillion a month on average: 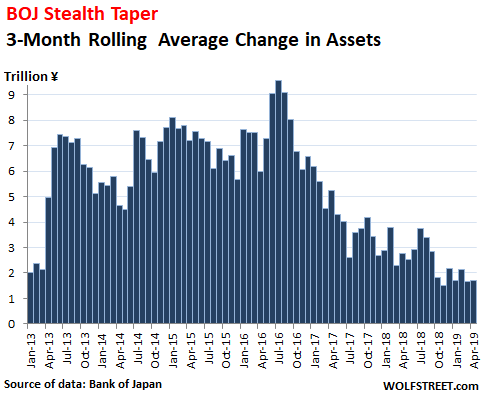 This addition of ¥1.7 trillion a month on average over the past six months amounts to an annual rate of growth in assets of ¥20 trillion. And this didn’t change despite the selloff in stocks late last year. So regardless what the BOJ claims about its program of adding ¥85 trillion in assets a year, it has trimmed its net additions down to a rate of about ¥20 trillion a year over the past six months – less than a quarter of the announced QE program, and the lowest since Abenomics kicked in.

The BOJ’s stealth taper lags what the other major QE-meisters, the ECB and the Fed, are doing.

The ECB’s balance sheet, at a gigantic €4.68 trillion ($5.3 trillion), is in dollar terms at current exchange rates, the fattest in the word. It amounts to 40.3% of Eurozone GDP. But it has been essentially flat for the past five months, as the ECB has followed through on its promise to stop QE in December: 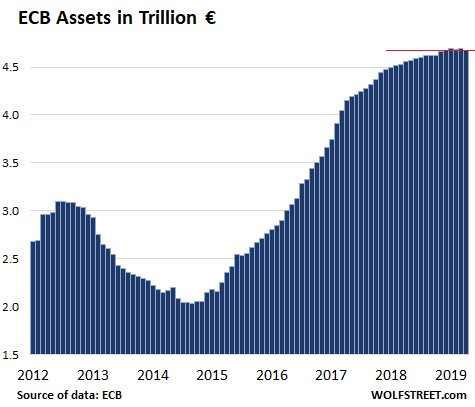 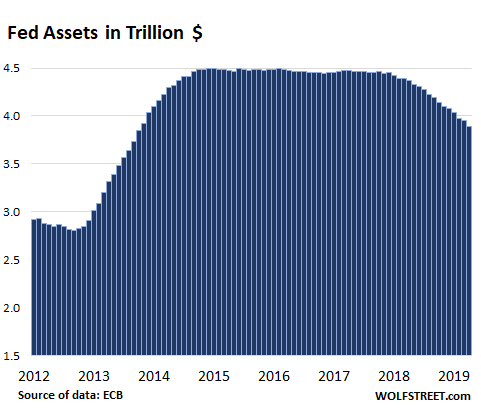 54 comments for “QE Party Over, Bank of Japan Stealth-Tapers Further”