Retail sales in April maintained the peak of the epic WTF spike of March, as Americans spent the same epic record pile of money of $620 billion (seasonally adjusted) at their favorite brick & mortar retailers, online, and at restaurants and bars, the Census Bureau reported today.

Price spikes in motor vehicles and price increases in other segments had a lot do with it. Total retail sales were up 20.4% from April 2019. This gives the epic WTF chart of the year a flat top, and a drop in May, when the stimmies peter out, is practically guaranteed: 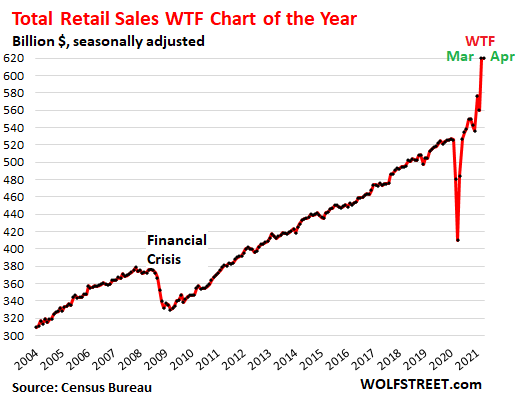 New & used auto dealers and parts stores: Sales rose another 2.9% in April from March, after having spiked by 17% in March from February, to a WTF record of $139 billion, seasonally adjusted.

This comes after months of tight inventories made worse by the chip shortage fiasco that is now gripping the automakers and crimping the supply of new vehicles for rental fleets that are then not selling their remaining older vehicles at auction, which crimps the supply for used vehicle dealers, triggering  massive price spikes in used vehicles – with the CPI for used vehicles exploding by 10% in April from March: 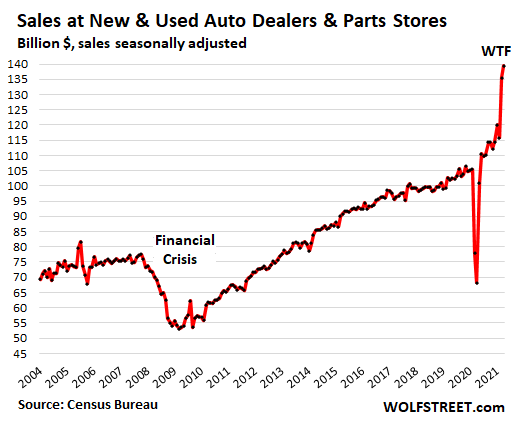 These are sales measured in dollars, not in units, and they’re not adjusted for price changes (inflation). The price increases have been massive and have therefore a massive impact on the retail sales figures. This is what the CPI for used vehicles did: 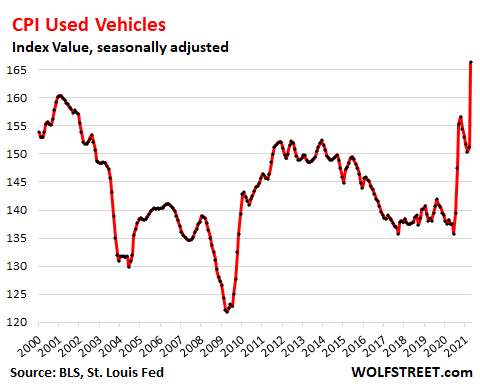 Sales at new and used vehicle dealers and at parts dealers are the largest segment of retail sales. In April, they accounted for 22.5% of total retail sales (in the chart below, top black line).

The other top retailers by category (details on them in a moment): 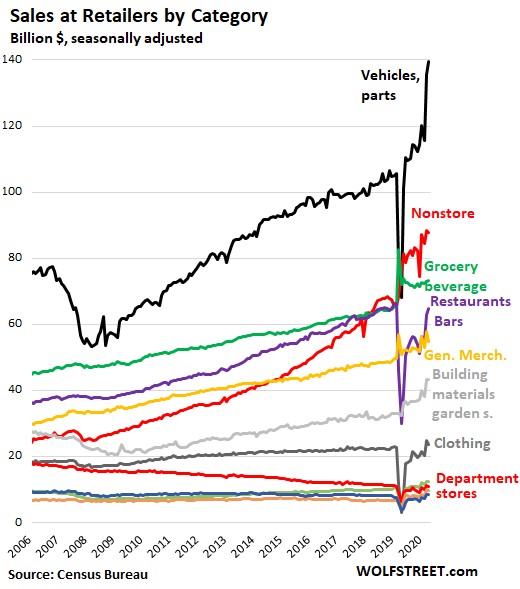 Ecommerce and other “non-store retailers”: Sales ticked down 0.6% in April from March after having jumped 6% in the prior month, to $87 billion, seasonally adjusted. Compared to April 2019, sales surged by 36%! This category includes ecommerce, mail-order operations, street stalls, vending machines, etc. 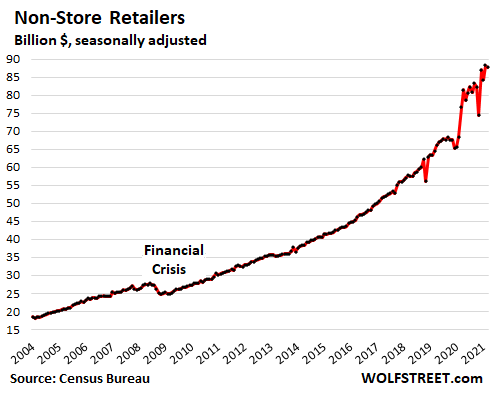 Food and Beverage Stores: Sales ticked up 0.4% in April from March to $73 billion, roughly flat for the past 12 months, but at high levels – up 15.5% from April 2019 – as some consumption has shifted from offices to households, thanks to working from home. 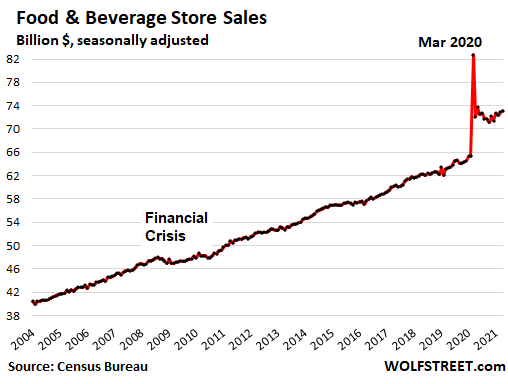 Restaurants & Bars: Sales rose 3.0% in April from March, after having spiked 13% in the prior month, to $65 billion; up 2.8% from April 2019, thereby having recovered roughly to the level before the Pandemic. That restaurants are raising their prices has a lot to do with it: 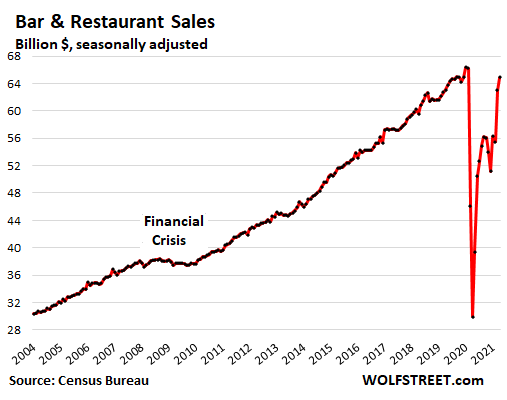 General merchandise stores (minus department stores): Sales fell 5.4% in April from March, to $55 billion, undoing much of the spike of the prior month. They were still up 13.5% from April 2019. This includes the brick-and-mortar stores of Walmart, Costco, and Target, but their ecommerce sales are included in nonstore retailers: 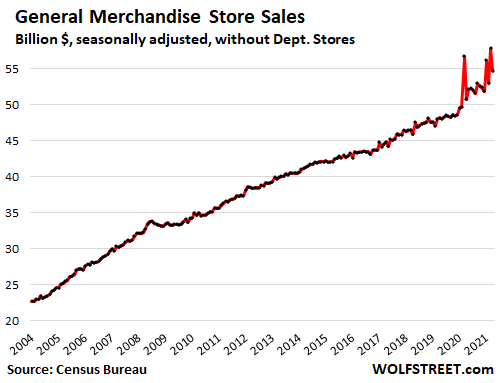 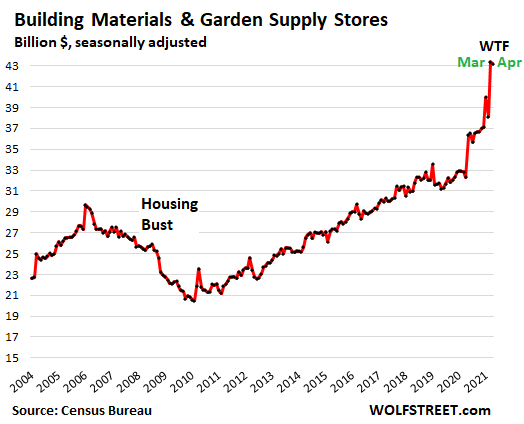 Gas stations: Sales dipped 1.1% in April from March to $46 billion. Sales in both months are still the highest since 2014, on substantial price increases for gasoline: Over the first four months of this year, the average price of gasoline in the US has risen by 28%, according to the EIA: 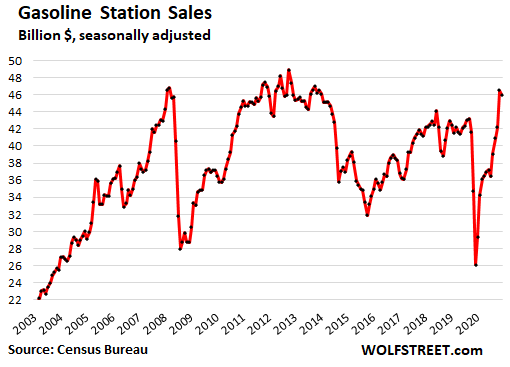 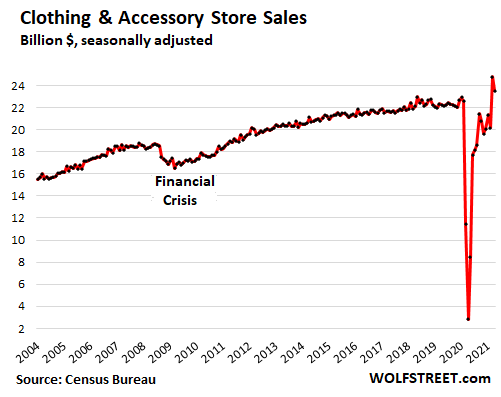 Department stores: sales fell 1.9% in April from March, to $11 billion. Despite the power of stimmies, sales were still down 5% from April 2019. Nothing is going to save this form of retailing from irrelevance. This includes sales at the brick-and-mortar stores of Macy’s, Kohl’s, J.C. Penney, etc., but not their ecommerce sales, which are reported under ecommerce. 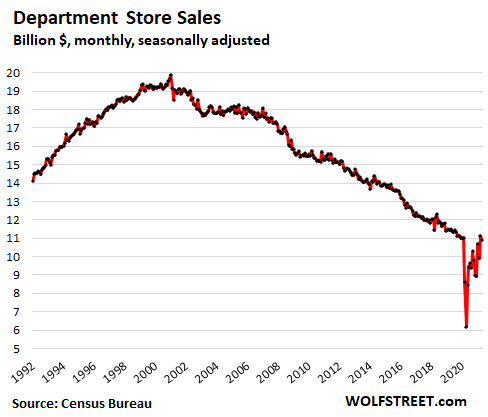 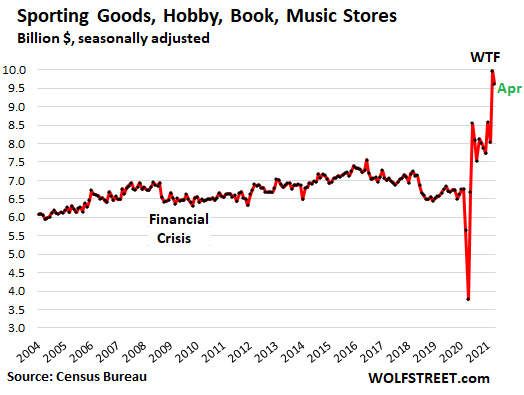 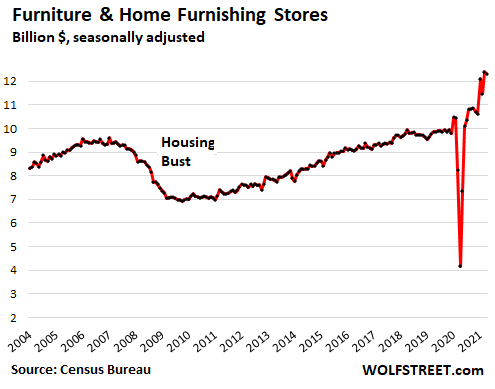 Electronics and appliance stores: Sales rose 1.2% in April from March, after the 17% stimmie spike in March, and were up 5% from April 2019. But as most consumer electronics and a lot of appliances are now sold online, brick-and-mortar sales were below where they’d been 15 years ago: 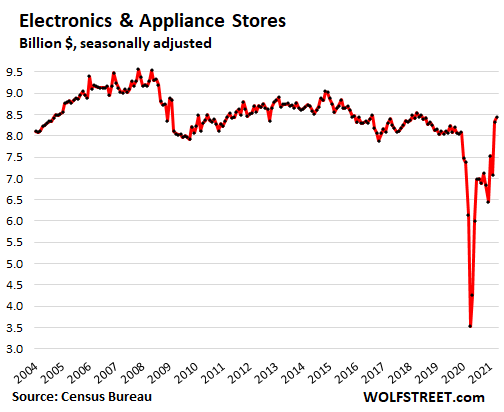 94 comments for “WTF Spike of Retail Sales Lives Another Month on Surging Prices & $1,400 Stimmies. Gonna Be Tough in May”