How can a SoftBank-backed real-estate broker in a red-hot housing market lose $212 million in Q1? Compass Shows how.

Shares of SoftBank-backed Compass, a real estate broker that calls itself “a tech company reinventing the space,” meaning the real estate broker space, dropped 5.5% today and closed at $13.66, having fallen 38% in 30 trading days from its intraday high on April 1, the day it started trading. It has now dropped 24% below its IPO price of $18. Despite the drop, its market cap is still $5.3 billion (data via YCharts): 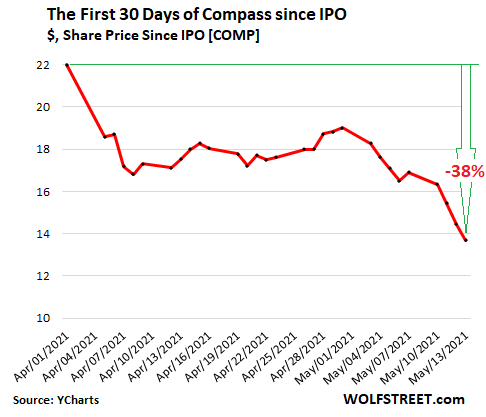 Compass spent the past few years going around the US, buying up real estate brokerages and hiring brokers away from other brokerages, with the oodles of money it had raised as unicorn in various rounds of funding, including from SoftBank – $1.5 billion in total.

But today’s stock move was a reaction to Compass’ first earnings report as a public company on Wednesday after hours. “Earnings report” is a misnomer because it reported a net loss of $212 million, on $1.1 billion in revenues. About 82% of its revenues are paid in commissions to its brokers. That was the case in 2020, and it was the case in Q1 this year.

How can a real estate broker in the reddest-hottest no-questions-asked housing market the US has seen in something like 14 years lose $212 million? But OK, it’s not a real estate broker. It’s “a tech company reinventing the space.” And SoftBank was backing it. And losing oodles of money was part of the plan.

And the meme-stock chasers got a hold of Redfin, a real estate broker that has been around for years, had its IPO in 2017, and also tries to come off as a “tech” company. It lost money in every one of the past five years. What is it with these money-losing brokers with “tech” ambitions during hot housing markets?

For the first three years of being publicly traded, the shares hobbled along in the $15 to $30 range, and March last year hit a low of $10. But then, the meme-stock chasers homed in on it, and the shares exploded by a factor of 10, to $98 a share by mid-February, a true WTF moment, and then gave up their ghost and plunged by half, including 2.6% today during the rally, to $48.68 a share. It’s still valued at $5 billion, about 5.6 times its annual revenues (data via YCharts): 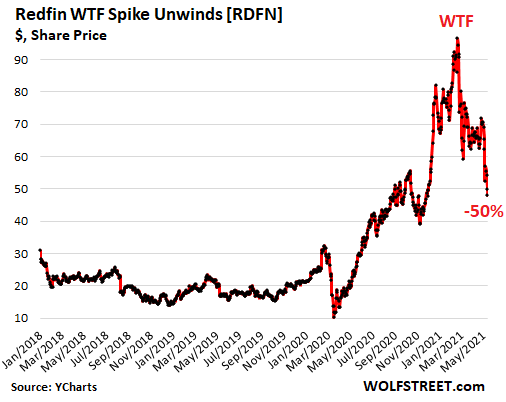 Zillow too has lost money every one of the past five years, despite the real estate boom. But it has gotten into house flipping. Its shares suddenly became miracle real estate meme in March last year and shot up from $28 to $200 in the same 11 months, in near lockstep with Redfin, and after that beautiful WTF moment, gave up their ghost.

The shares have now plunged by 49% from its raging-mania peak in February, including the 1.5% drop today during the rally. At $107.10 at the close today, the company still has an astonishing market capitalization of $27 billion, about 8 times revenues (data via YCharts): 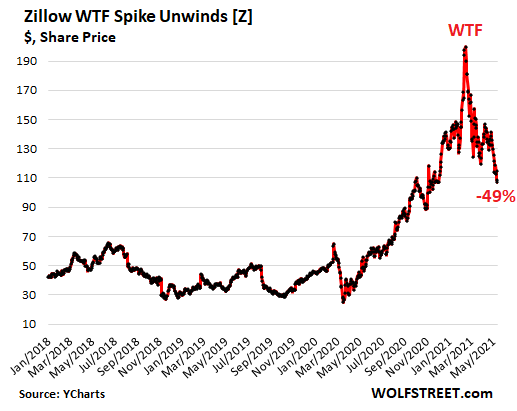 Another SoftBank-backed unicorn, mortgage lender Better – which calls itself “digital homeownership platform” – announced on May 10 it would go public via a merger with a SPAC, namely Aurora Acquisition Corp. [AURC], at an “implied” valuation of $7.7 billion.

That was a quick paper buck for SoftBank. Now it just needs to be able to unload its stake. And it makes you wonder: On April 9, SoftBank invested $500 million in Better at a valuation of $6 billion. In just five weeks, the already mega-massive valuation, negotiated behind closed doors, has jumped by another 28%.

And now the public is being asked to step up to the plate to support and keep going the wonders of the craziest WTF financial doings the world has ever seen – the “raging mania,” as Stanley Druckenmiller called it so aptly.

But  SPACs have had a rough time in the stock market recently, and so good luck with this Better one. It’ll need it. The Defiance Next Gen SPAC ETF [SPAK], which was launched last October to track SPACs, sagged 1.9% today, despite the rally in the overall market, to $22.35, down 36% from its peak in mid-February, and now at its lowest close ever (data via YCharts): 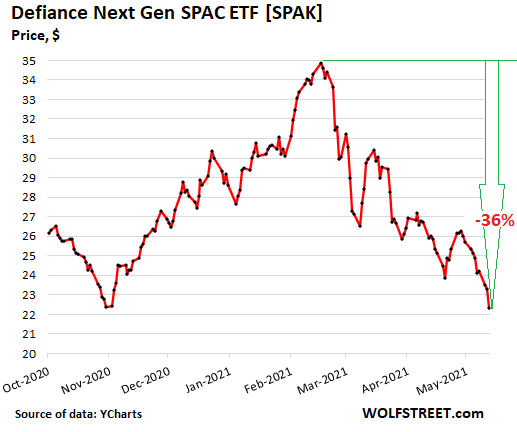