Our always amazing American debt slaves are still borrowing, mind you, but to the great consternation of the Fed, they’re reducing their debt where banks and shadow banks make a big pile of their money: credit cards and other high-interest-rate debt such as personal lines of credit.

Total household debt – mortgages, HELOCs, credit cards, auto loans, student loans, and other debt – rose by $85 billion in Q1, to $14.6 trillion, according to the New York Fed’s Household Debt and Credit report Wednesday afternoon, based on data from Equifax. 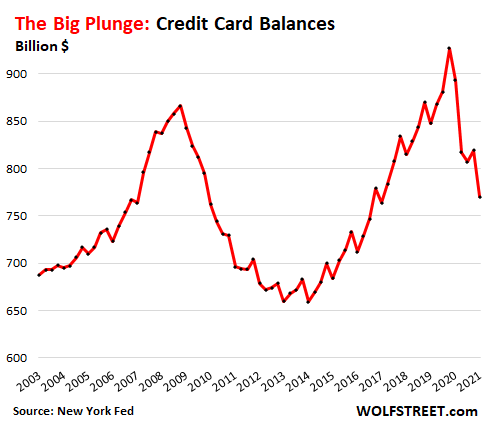 In the wake of the Financial Crisis, credit card balances also plunged, but they took a lot more time – four years, from Q4 2008 to Q4 2012 – and it wasn’t because consumers paid them down, but because consumers defaulted on them, and those balances were written off.

This time around, there are waves of stimulus money, and PPP loans, and extra unemployment benefits, and eviction bans, and foreclosure moratoriums, and rent aid, and whatnot. The government has taken a fire hose and has sprayed the land with cash, and it has put collection of some debts on hold.

Many consumers received the series of stimmies, starting in April 2020. For many of them, it was extra money that suddenly showed up, and instead of putting it into a checking account where it serves no purpose, some people used it to pay down their usurious-interest rate debt – smart thing to do.

Some of the stimmies were also spent on goods, as retail sales have experienced a glorious previously unheard-of WTF spike despite the drop in credit card balances: 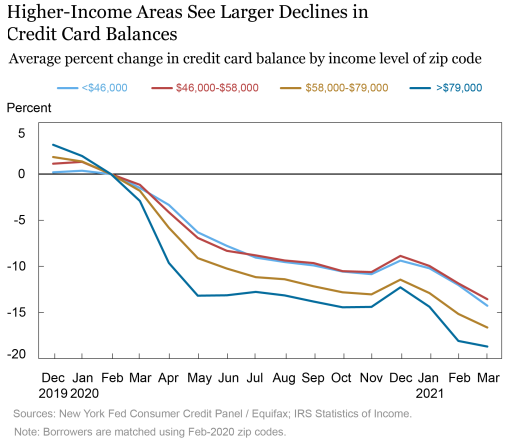 The fact that the Fed is trying to sort out this phenomenon of Americans actually paying down their usurious-interest debts and depriving the banks of some serious moolah shows how serious this situation is.

Despite the stimmies and the other government moneys washing over consumers, the serious delinquency rate (90+ days past due) has been high and in Q1 hit 10% of total credit card balances, the highest rate since 2013, according to New York Fed data. But it remains far below the Financial Crisis peak of nearly 14%: 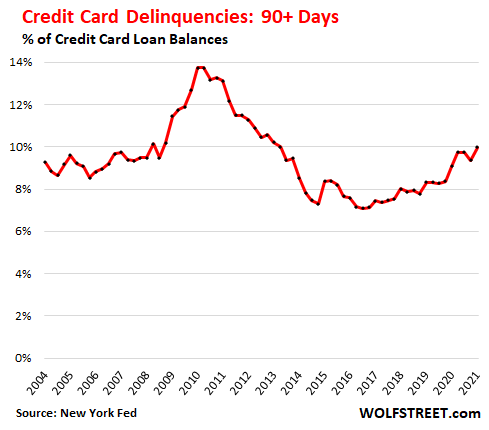 The balances of personal loans, lines of credit, and other loans from banks, shadow banks, peer-to-peer lenders, and payday lenders have declined during the Pandemic, after rising for years. This too was an effect of the stimmies and other measures. In Q1, balances dropped by $6 billion from the prior quarter and by $19 billion since Q4 2019, to $413 billion: 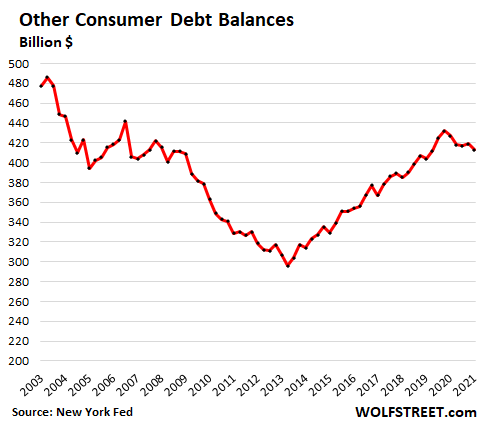 Serious delinquencies of 90+ days past due ticked up to 7.7% of total balances, having risen steadily since the recent low of 2017, but remain below the peak during the Financial Crisis: 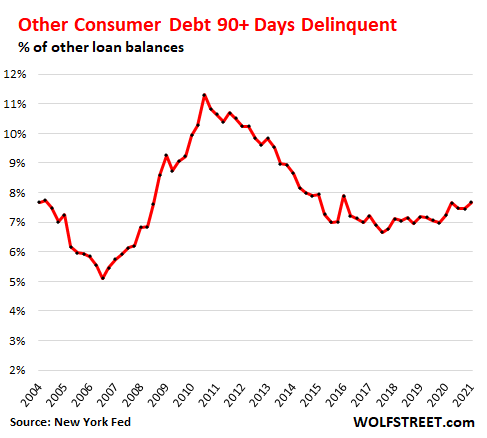 This is a long-term phenomenon that started in 2009, when people massively defaulted on their HELOCs during the mortgage bust, and it has continued unabated as people have switched to cash-out refis to leverage up their home, rather than relying on HELOCs. 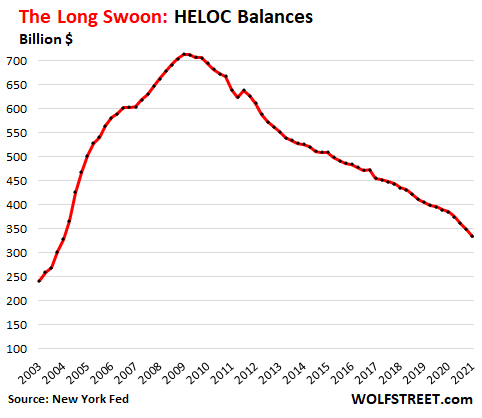 Mortgage debt jumped by $120 billion in Q1, after jumping by $182 billion in Q4, powered by record-high levels of mortgage originations and ballooning home prices that require ballooning mortgages: 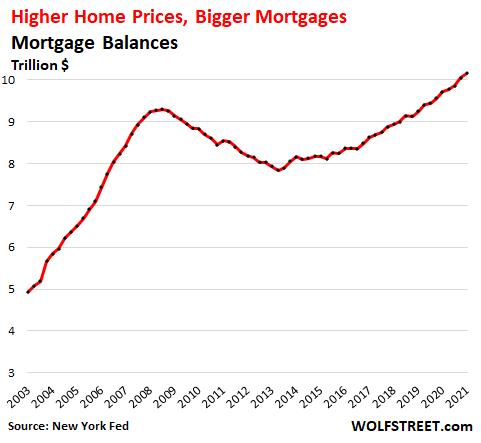 The balance of mortgages that are 90+ days delinquent declined to 0.59% of total mortgage balances, a new record low in the data.

This comes as 2.2 million mortgages are still in forbearance, according to the Mortgage Bankers Association, and those that are delinquent don’t count as delinquent in this data here, which is from Equifax. Forbearance programs have been extended.

Forbearance is also the reason credit scores have risen during the Pandemic: credit bureaus don’t count delinquent debt that is in forbearance as delinquent.

Also shown: The HELOC delinquency rate (green line) ticked up to 1.18%, but remains at the low end of the range of the 12 years: 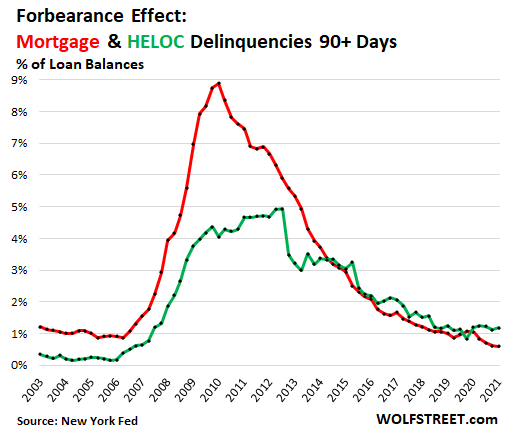 Soaring new and used vehicle prices lead to surging loan balances. The balance of auto loans and leases rose by $8 billion in Q1 after having surged by $14 billion in Q4 and by $17 billion in Q3, from record to record, except in Q2 when loan balances dipped as auto sales briefly collapsed: 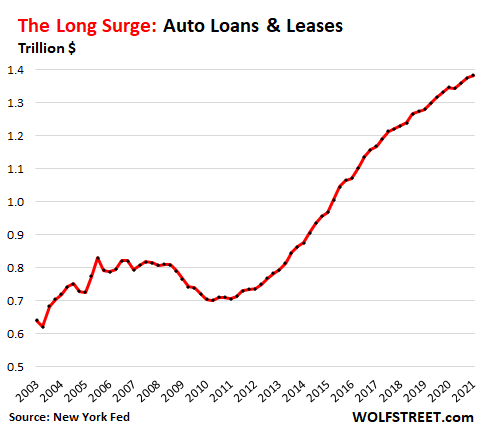 Seriously delinquent auto loan balances have dipped during the Pandemic as stimmies were used to catch up with car payments, but after growing for years, they remain high at 4.8% of total balances. During the peak of the Financial Crisis, seriously delinquent balances peaked at 5.3%: 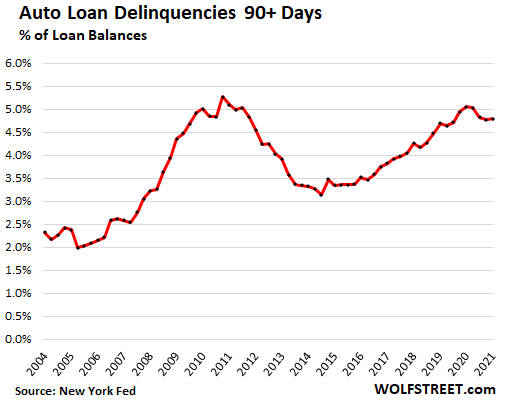 Last year, all government-backed student loans were automatically enrolled in forbearance programs that have now been extended. And everyone is hoping for loan forgiveness. As a consequence, few borrowers are making payments on their student loans.

Repayments had already been minimal and declining for years. These low repayment rates in the past, based on numerous programs available to borrowers to slow or stall repayments, were a large contributor to the ballooning balance of student loans even as college enrollment has declined every year since 2011. 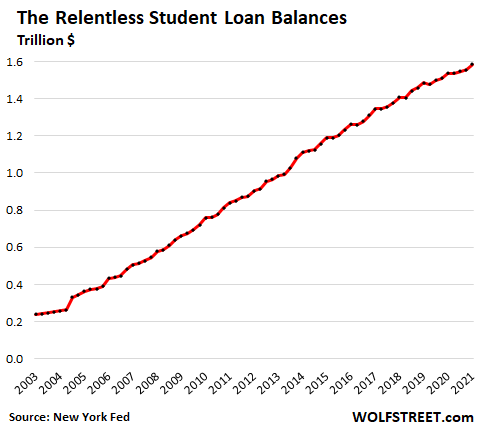 Student loans that are in automatic forbearance don’t count as delinquent in the Equifax data here, and so the rate of seriously delinquent student loans plunged in Q2 last year, when the forbearance went into effect, and continued to decline, and in Q1 hit a record low of 6.2%, even as loan repayments have ground to a halt: 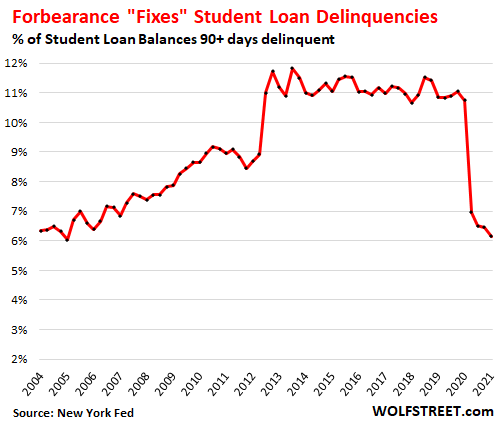 137 comments for “State of the American Debt Slaves: Fed “Confounded” as They Pay Down Credit Cards, Other High-Interest Debt, and HELOCs”