The pandemic threw higher education into chaos in the middle of the spring semester. How this will pan out for students, colleges, the whole army of people that works in higher education, the asset class of student housing, student housing mortgages packaged into commercial mortgage backed securities (CMBS), text-book publishers, and the rest of the industries surrounding the sector is highly uncertain. But even before the crisis hit, before the shutdowns, student enrollment in the spring 2020 fell for the ninth year in a row.

The number of post-secondary students – undergraduate and graduate students – fell 0.5% from the Spring semester last year, or by over 83,800 students to 17.18 million students, according to the Current Term Enrollment Estimates Report by the National Student Clearinghouse Research Center, released on Tuesday. Compared to the spring semester in 2011, enrollment is now down by 10.6%, or by 2.03 million students: 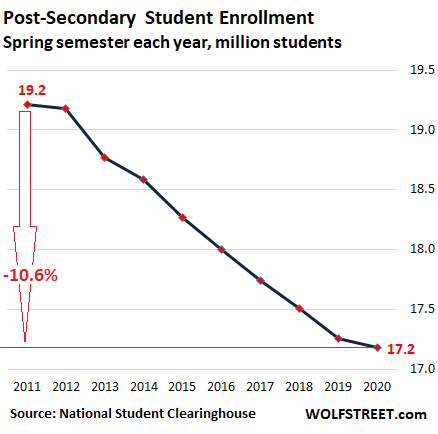 The Clearinghouse emphasized that based on the cutoff date for the submission of the data, “the current report should be viewed as a pre-shutdown, start-of-term baseline that does not reflect any effects of the pandemic on enrollments.”

The report is based on enrollment data submitted to the Clearinghouse by educational institutions (not survey based) and covers 97% of total enrollment of degree-granting institutions in the US.  Since the data is submitted at the student level, it is apparent when students are enrolled in more than one institution, and those duplications are removed from the data, to generate the “unduplicated student headcount” in the chart above. International students, accounting for close to 5% of total enrollment, have been excluded from the student headcount.

All types of colleges were hit by enrollment declines.

This spring semester, compared to spring 2019, enrollment declined in all institution sectors. The largest percentage drop was at public two-year colleges:

Enrollment in private for-profit colleges has collapsed since 2011.

After a long series of scandals, the government’s response to those scandals, and innumerable lawsuits filed by shafted students and others, enrollment in private for-profit four-year colleges has plunged by 55.2% in nine years, from 1.63 million students in the spring semester of 2011 to 729,364 students this spring semester – accounting for 44% of the drop in total enrollment in all types of institutions since 2011: 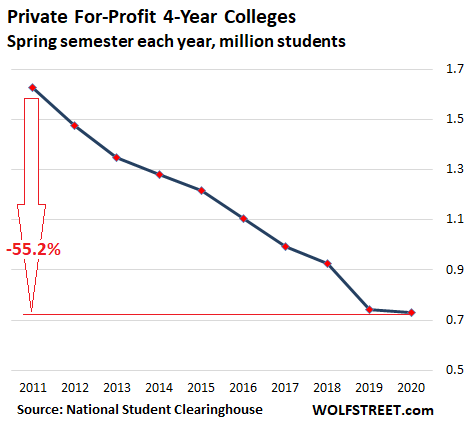 Enrollment in public schools has diverged.

At public two-year schools, the 2.3% drop in enrollment this year added to the drop in prior years; and since the spring semester of 2011, enrollment has plunged by 25%, or by 1.67 million students, pushing the total down to 4.997 million students (blue line in the chart below).

At public four-year schools, enrollment had seen increases in 2015 through 2017 (7.68 million students), as some of the students that were abandoning for-profit colleges decided to continue with their education at public schools. But then enrollment began to decline again, dropping 1.7% since 2017, to 7.55 million students. It remains 2% higher than it had been in 2011 (red line in the chart below): 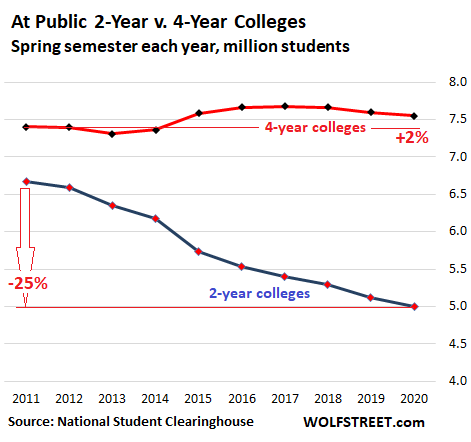 Back in the spring of 2019, enrollment at private nonprofit four-year colleges – this includes some of the most elite universities in the US – had jumped 3%, the largest percentage increase since 2012, after years of stagnating or declining. But this spring, enrollment declined 0.7% to 3.78 million students.  Nevertheless, since 2011, these institutions have gained 8.9% in enrollment: 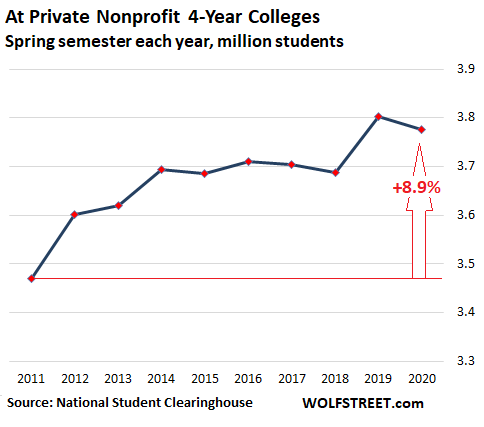 Of all students with declared majors (9.06 million), the top two majors combined – “Business, Management, Marketing, and Related Support” and “Health Professions and Related Clinical Sciences” – accounted for 28.5%. Over the two years since 2018, however, those majors declined by 3.0% and 2.1% respectively.

The third largest major – “Liberal Arts and Sciences, General Studies and Humanities” – dropped by nearly 12% in those two years.

Enrollment in “Computer and Information Sciences and Support Services,” the sixth largest major, jumped by 10.4%.

The table below shows the broad categories of majors, how many students declared them their major in the spring semester 2020, and the percentage change from two years ago.

The STEM majors (science, technology, engineering, mathematics) are spread over a number of majors in the list below (here’s UC’s 32-page list and descriptions of STEM fields, ranging from “Agricultural Animal Breeding” and “Aeronautical/Aerospace Engineering” to “Petroleum Technology” and “Systems Engineering”). If your smartphone clips the third column, hold the device in landscape position.

Of the total student enrollment in the spring semester, 15.6% were graduate students. Their number, 2.73 million, was roughly stable with a year ago, after two years of increases.

The age of all students as a percent of total enrollment:

Men are leaving the classroom.

Men accounted for just 41.4%, or 7.2 million students, of total student headcount in the spring semester. The enrollment of men has continued to decline every year since 2011, including by 1.8% this spring semester, by 2.8% a year ago, and by 1.9% two years ago.

Women accounted for 58.6%, or 10.2 million students, of the student headcount in the spring semester. This spring, enrollment ticked up 0.5% after having declined by 0.8% in each of the prior two years.

Even before the pandemic and the lockdowns, these were very tough dynamics for this huge sector of higher education that drives so much and engendered entire industries, such as text-book publishers, and asset classes such as “student housing” and student-housing CMBS, whose delinquency rates began spiking last year.

Now all this is history. Enrollment going forward is in turmoil. There are voices now recommending that students consider taking a year off and go do something else, until the dust settles. Some schools are switching at least temporarily some or all of their coursework to online, and students can live anywhere to take those courses. There are other big changes now underway.

And many local economies centered around universities will experience considerable upheaval, including in their real estate market and its creditors and investors, as these students suddenly don’t show up, or don’t show up in the usual numbers – that in many places have already been declining for years.

There is a meme going around among student-loan borrowers: Only morons still make payments on their student loans because these loans soon be forgiven anyway. More and more borrowers are using the options available to defer the loans. This produces the phenomenon of stalling loan repayments that is causing student loan balances, despite the declines in enrollment, to surge. Read... The State of the American Debt Slaves, Q1 2020: How Are Consumers Positioned Going into the Crisis?

132 comments for “College Enrollment in the Spring Fell for 9th Year in a Row, and Now Comes Covid”