Here are the towns that offer the biggest incentives to remote workers who make the move. I’m rooting for Tulsa, which has been able to attract hundreds of “remoters.”

It’s a mix of hilarious and peculiar that this theme is now being promoted in the San Francisco Chronicle, the theme being that a number of towns and cities around the country are offering cash payments and/or other incentives, with a combined value of up to $20,000, to people with full-time work-from-anywhere jobs who make the move and bring their income with them.

It’s hilarious and peculiar because San Francisco is the epicenter, so to speak, of suffocating housing costs, the switch to work-from-home, and the Techsodus where companies are leaving, putting their vacant offices on the sublease market, triggering a historic glut of office space in San Francisco, and heading to cheaper pastures (screenshot from the SF Chronicle). 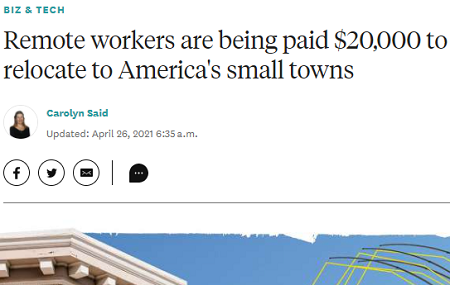 Now the San Francisco Chronicle is telling strung-out stayers-behind that there is a great deal out there for them, that they can escape the suffocating housing costs, if they just take their high San Francisco income and move to these low-cost towns and get paid to make the move. Some nice towns too.

It’s also funny that the Chronicle calls these places “small towns.” While some of them are decidedly small towns, such as a couple of contenders in Iowa, each with fewer than 3,000 souls, others are not, such as Tulsa – the granddaddy of this promotion, which it started in 2018 – with a city population of 400,000 and a metro population of 766,000. I used to live there. It’s hilly, and the Arkansas River and River Parks snake along the edge of it. And it’s decidedly not a “small town.”

Among the cities that offer incentives and that should complain about the “small town” moniker is Baltimore. But its incentive isn’t no-strings-attached cash, but $5,000 in form of a forgivable loan for the down payment on a home purchase.

So the San Francisco Chronicle reports:

“Small towns across America have a message for the new crop of remote workers: We’ll pay you to move here.

“From Maine to Michigan, communities are dangling incentives ranging up to $20,000 in cash and perks for out-of-state folks who relocate and stay at least a year, while continuing their existing jobs from a distance. Besides the money, the main lures are lifestyle amenities — a slower pace, affordable housing, less traffic, access to nature, close-knit communities.”

The idea is that the people bring their big-fat San Francisco income with them, and spend this income in their new low-cost city, that they go out and splurge and form a household and make babies and circulate their high income and get these cities some much needed growth.

There are currently 38 towns that offer cash and/or other incentives, ranging from $20,000 to nearly nothing, to attract people with full-time remote jobs, according to MakeMyMove. Don’t forget to read the small print before you decide to move from San Francisco to Northwest Arkansas – which includes the cities of Fayetteville, Springdale, Rogers, Bentonville (Walmart headquarters), Benton, and others.

Here are the cities with the highest “total incentive value,” which in some cities does not include any cash but is limited to tax credits, aid for home construction, forgivable loans for down payments, etc. If your smartphone clips the six-column table on the right, hold your device in landscape position (data via MakeMyMove and from program websites):

There is a reason why these places offer incentives to get work-from-anywhere folks with big incomes to move there.

Tulsa experienced some phenomenal oil booms in the 20th century, when oil wealth was running knee-deep in the streets. But all that ended with the oil bust of the 1980s, when the oil companies there packed up their headquarters and moved to Houston. Gone were the high-paying jobs. A long depression followed. But work-from-anywhere is Tulsa’s moment. They sure make it sound appealing.

Tulsa – whose rents are in 98th place among the top 100 rental markets with a median asking rent of $630 for a one-bedroom – started this in 2018. It put up a website, Tulsa Remote, and promoted it to the media, and finally during the Pandemic, when work-from-anywhere became standard operating procedure, they got some traction with their deal.

This is aimed at people with full-time work-from-anywhere jobs that are tired of trying to buy a $1.5 million starter home in San Francisco, or paying $2,500 in rent for a basic apartment.

The program pays $10,000 in cash upfront – which takes some risk out of the move. This can also be applied to the down payment of a home (median home price is $146,000 in Tulsa, according to Zillow). In San Francisco, the entire home price in Tulsa of $146,000 might not even be enough for a 10% down payment. They also offer all kinds of other incentives.

The number of movers is not huge. Tulsa Remote announced on April 22 that it had 153 “remoters” from California, 95 remoters from Texas, 62 from New York, 39 from Colorado, and 24 from Florida, among others. So actually, the majority is not from California.

And given California’s population of nearly 40 million, the missing 153 work-from-anywhere folks who moved to Tulsa don’t make a huge dent in California. But if this picks up momentum, it could make a difference for Tulsa.

130 comments for “Work-from-Anywhere San Franciscans Goaded by SF Chronicle to Take “$20,000” Offered by “Small Towns” and Move there to Escape High Housing Costs”