Smaller companies too: Boots-on-the-ground view of surging costs in the roofing manufacturing industry. The Fed will brush it off as “temporary,” but the inflationary mindset has set in.

Big companies, such as Procter & Gamble, have used their earnings calls to prepare investors, customers, and consumers for what is coming: Surging input costs are creating hefty margin pressures, and companies are confident they can regain their margins by passing on those surging costs by implementing large price increases. Smaller companies face the same scenario of surging input cost and margin pressures.

Todd Miller, President of Classic Metal Roofing Systems, which manufactures metal shingles in the US, sent me an email today where he goes into detail as to what his industry, and the broader home remodeling industry, is facing, in terms of surging costs, shipping issues, and supply constraints. This is Todd Miller, a long-time reader and supporter of Wolf Street:

“Our industry is dealing with supply chain shortages as well as rapidly increasing prices. While we have not had to go to this extreme yet on the types of specialized products we produce, I have seen the selling prices of “commodity-based” metal roofs increase by 30% over the last six months, with additional increases projected.

“The end result is we have a very robust remodeling and construction market, with limited product availability and spiraling prices. Everyone is aware of the lumber issues, but we’re also hearing of major issues with windows, doors, and siding products.

“As a metal roofing manufacturer, here are some of the raw material increases we have experienced over the past six months:

“Typically, the metals and coatings make up about 85% of our product costs.

“And then we’re also dealing with escalating freight costs as well as difficulty in shipping internationally. Our customer in Japan is also experiencing a very robust market, but it can be 30+ days for us to get a container scheduled to take product to them.

“We do import polymer roofing underlayment from China and the big issue there has also been deliveries – getting containers to bring product to us.

“I suspect that some of the raw material prices will soften hopefully in late 2021 and early 2022. But increases in costs for labor and transportation will make it challenging for most manufacturers in our sector to drop prices – we will all be working to regain margin from the raw material increases.”

In terms of publicly traded companies, the number of mentions of “inflation” during earnings calls more than tripled year-over-year so far, “the biggest jump in our history since 2004,” according to BofA Global Research analysts on Monday, cited by CNBC’s Carl Quintanilla, who tweeted this chart from the BofA analysis: 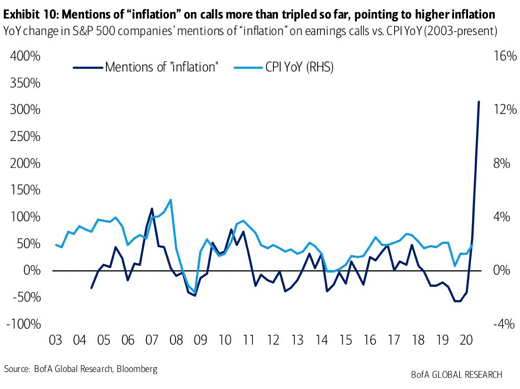 In the past, the number of mentions of inflation “has led CPI by a quarter with 52% correlation and points to a robust rebound in inflation ahead,” the BofA analysts wrote in the same report, cited by MarketWatch. The “major drivers” of these mentions were the costs of raw materials, transportation, and labor.

Procter & Gamble CFO Andre Schulten said during the earnings call last week, “The commodity cost challenges we faced this year will obviously be larger next fiscal year. We will offset a portion of this impact with price increases.”

They’re looking at raising prices on their products “in the range of mid to high single-digits,” he said. “We are analyzing raw material and foreign exchange impacts in other categories and markets, and we are assessing the need for additional pricing moves.”

All companies are planning to pass on the surging input costs via price increases, or they have already done so, and they’re all adding to inflationary pressures.

John Hartung, CFO of Chipotle said during the earnings call, “We think everybody in the restaurant industry is going to have to pass those costs along to the customer. And we think we’re in a much, much better position to do that, than other companies out there.”

Whirlpool in its earnings call discussed raw material inflation, “particularly in steel and resin,” that “will negatively impact our business by about $1 billion.” It said that it had announced “price increases in various countries across the globe ranging from 5% to 12%.”

Kimberly-Clark during its earnings call explained how it is trying to keep up with “raw material inflation,” as input costs are rising fast and price increases and cost cutting lag.

“So, one way to think about the run-up in inflation that we have for the year is that within the year, we will cover about half of that with pricing,” CFO Maria Henry explained.

“And then when you add in the additional cost savings both in terms of our increased outlook on the FORCE program as well as additional tightening of the belt around discretionary items, you would get to cover a good portion of the inflation,” she said.

“In terms of input cost inflation, that is ramping in the first quarter and the second quarter. We expect that it will peak, and then moderate, and in some cases come down a bit in the second half,” she said.

Kimberly-Clark CEO Michael Hsu summed it up: “We are moving rapidly especially with selling price increases to offset commodity headwinds.”

These examples represent a large-scale movement. And it boils down to is this: Forget 2% inflation. There are hefty margin pressures on companies all around, and they’re now resorting to hefty price increases to offset surging input costs. And their customers – other companies and consumers – are paying those higher prices. The whole mindset has changed. An inflationary mindset has become established in no time, and there will be a massive overshoot of inflation that the Fed will attempt to brush off as temporary.