Massive Pandemic Shifts that triggered plunging rents in the most expensive cities and surging rents in cheaper cities still on display.

Has the turmoil in the rental market, triggered by work from anywhere and an exodus from the most expensive cities, settled down? Have rents in those cities hit the bottom of the canyon yet? That’s what everyone wants to know. Rents are not going to zero. At some point they stop dropping, as a majestic churn takes place, with people switching apartments to upgrade for the same rent or maintain the same level of quality for less. This churn is taking place in big cities with sharply dropping rents. High lease activity doesn’t mean people are suddenly coming back. It means tenants are switching apartments for better deals.

In San Francisco, the most expensive rental market in the US, the breath-taking downward spiral, after an uptick in January, ticked down to a new multiyear low in February, according to data from the Zumper National Rent Report: The median one-bedroom rent declined to $2,650, down 24% from a year ago and down 29% from June 2019: 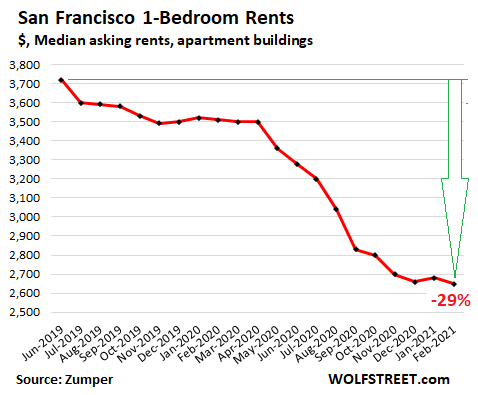 These rent declines in San Francisco now exceed those during the dotcom bust, when rents plunged over three years – from Q1 2001 through Q1 2004 – to get there, and then spent over a decade in the hole. 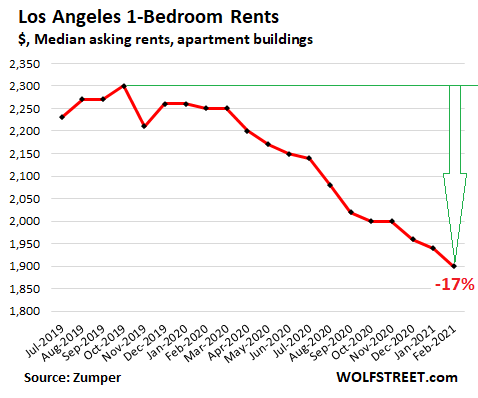 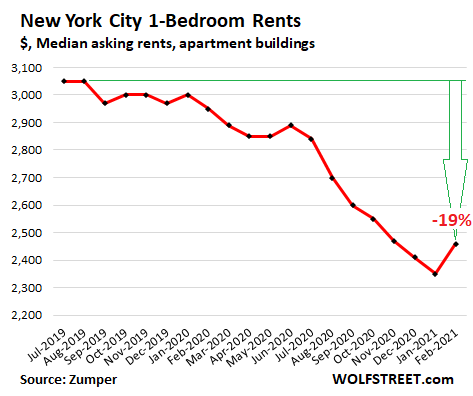 “Asking rent” is the advertised rent of a rental apartment, but does not include concessions, such as two months free, which have the effect of reducing the rent, without the reduced rent showing up in the data. “Median” asking rent is the middle asking rent, with half of the asking rents higher and half lower. The data here covers apartment buildings, including apartment towers and new construction, but not single-family houses for rent or condos for rent. Zumper collects this data from around 1 million listings on Multiple Listings Service (MLS) and other listing services, including its own listings, in the 100 largest markets of the US.

Newark, NJ, a relatively small city just across the Hudson River from New York City, ended up being the target for a relatively small number of rent refugees from New York City, but given the small size of Newark’s rental market, rents were upended by the influx, and the median 1-BR asking rent skyrocketed by 52% from July 2019, which catapulted Newark into one of the top ten most expensive rental markets. Newark! The price jumps were clearly overdone, potential tenants lost interest, and a correction was overdue. 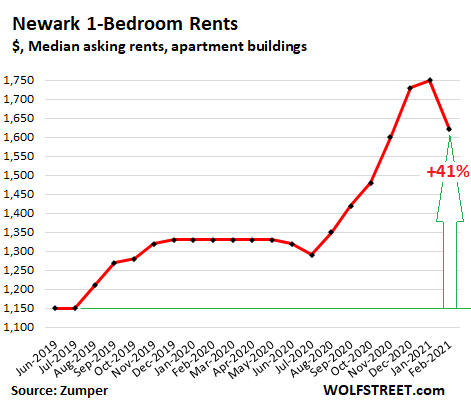 This phenomenon of surging rents in smaller cities that are near large expensive cities has been playing out across the US, as part of the work-from-anywhere shift, where there is no reason to pay the huge rents if you don’t have to commute to work anymore, or have to commute only infrequently. Zumper compiled this comparison of the most expensive cities (chart below), where rents dropped sharply, and their less expensive neighboring cities, where rents shot up. 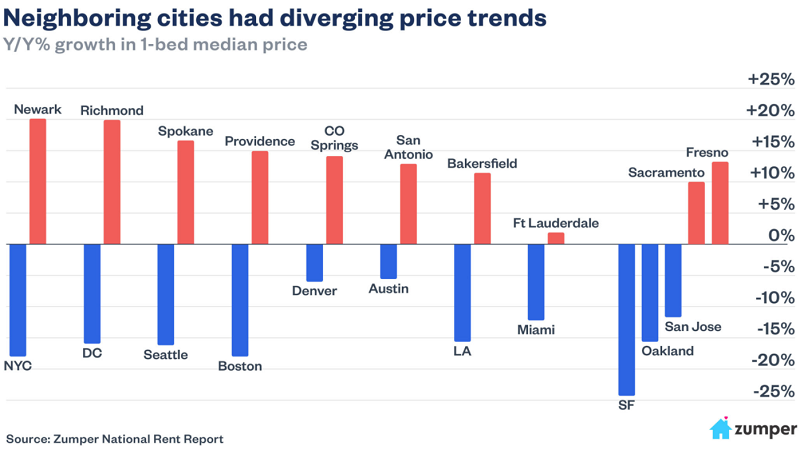 In Seattle, the lonesome uptick in January, after spiraling down for months, was neatly undone in February, with the asking rent for 1-BR apartments dropping back to $1,500, down 16% from a year ago, down 21% from October 2019, and down 25% from the peak in May 2018. 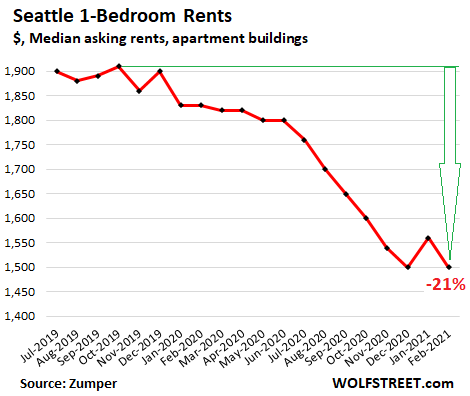 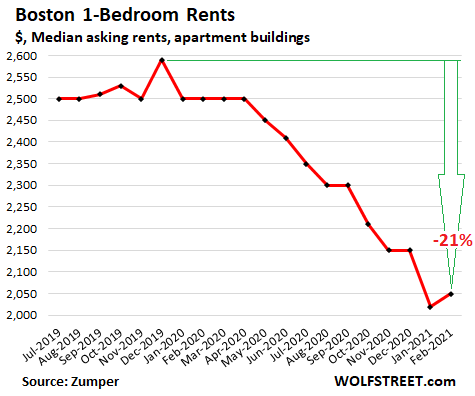 This list also shows the month and year of peak rent in the shaded area and the decline since then. This is an important figure because in the year-over-year comparisons, the history gets lost, such as the massive declines from their peaks in Chicago and Honolulu, where rents have been bouncing along the bottom of the range for well over a year. Of the 17 cities, 14 experienced double-digit declines in 1-BR rents from their peaks (shaded area): 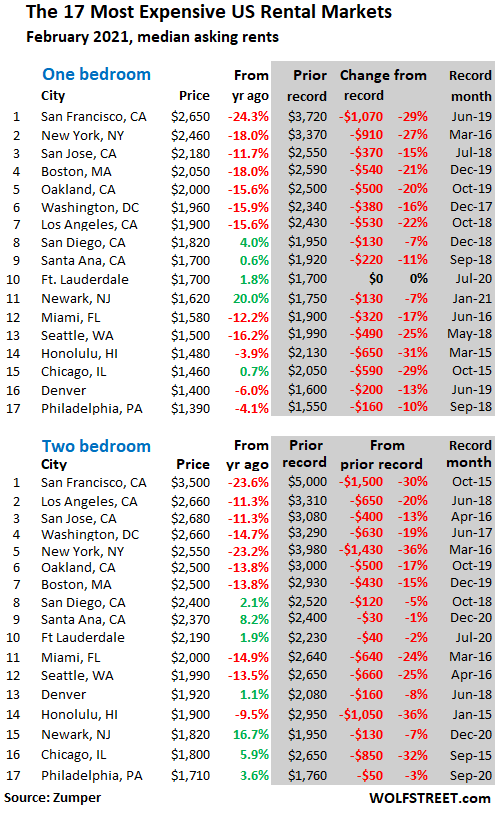 Beyond the most expensive markets with dropping rents, there is another reality: surging rents. Of the 100 largest rental markets, 1-BR rents rose in 72 of them in February, compared to a year earlier. And in 26 of those cities, rents surged year-over-year by 10% or more, topping out at 20%-plus in three cities. These are huge rent increases, a testimony to the distortions going on in the rental market.

The table below shows the largest 100 rental markets, with 1-BR and 2-BR median asking rents in February, and year-over-year percent changes, in order of the price of 1-BR rents (if your smartphone clips the 6-column table on the right, hold your device in landscape position):