Exports via pipeline turned Mexico into the largest buyer of US natural gas. In 2016, exports of liquefied natural gas (LNG) by ship took off, particularly to South Korea, Japan, and China, but also Spain and the UK. From March through July 2020, LNG exports collapsed by 60%, but then bounced back and blew past the prior record. According to the EIA’s new data for the end of the year, LNG exports in December jumped to 304 billion cubic feet: 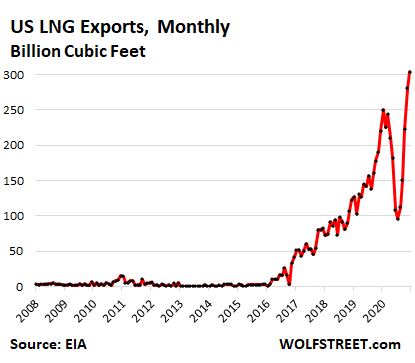 For the whole year 2020, LNG exports closed out with a new record of 2.4 trillion cubic feet, up 31% from the prior year, despite the collapse in the middle. 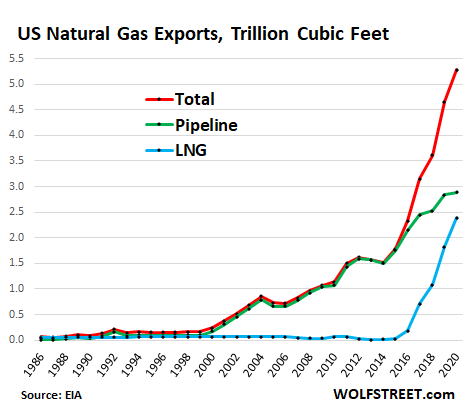 Natural gas imports in 2020 dropped 7% to 2.6 trillion cubic feet, the lowest since 1993. Of these imports, 98% came via pipeline from Canada. The US and Canada have a vibrant bilateral trade in natural gas, each serving regions in the other country that are not well connected by pipelines to its own producing regions.

Small amounts were also imported via LNG during peak winter months by areas in the US that are not yet well connected via pipeline to the new producing regions in the US, despite major efforts to build out the infrastructure over the past decade. Boston is one of them.

Natural gas imports had peaked in 2007, just before the fracking boom commenced, at 4.6 trillion cubic feet. Since then, they have plunged by 43%.

Given the continued surge in exports, and the continued drop in imports, “net exports” of natural gas – exports minus imports – soared by 46% in 2020 to a new record of 2.7 trillion cubic feet: 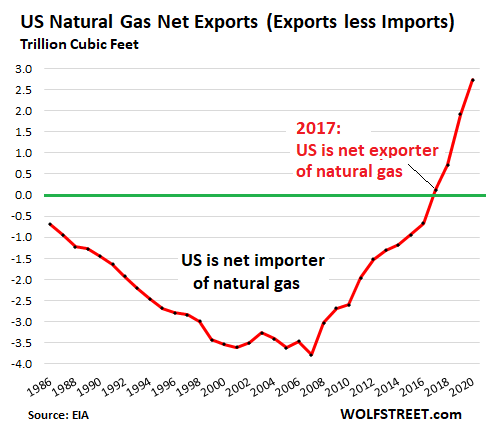 China (green line) just about stopped importing US LNG in 2019 at the boiling point of the US-China trade war. But then in 2020, it pulled out its checkbook: 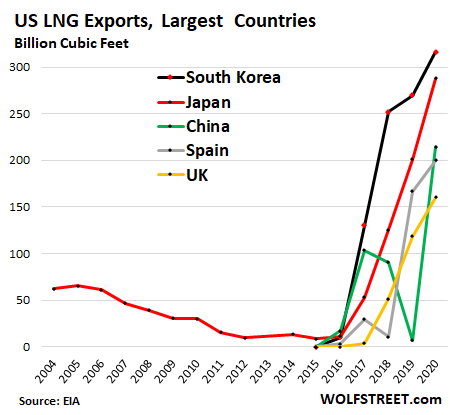 The price of natural gas in the US.

The fracking boom – among its other accomplishments – collapsed the price of US natural gas. At the moment, natural gas sells for $2.49 per million Btu (MMBtu) at the Henry Hub, the official delivery location for futures contracts on the NYMEX. In the years before the fracking boom, the price was mostly above $4 with horrendous spikes into the double digits.

But in mid-February, there was an extraordinary spike when Texas production sites froze up. On February 17, natural gas closed at $24/MMBtu. The weekly chart below, with data from the EIA, shows the price for that week at the close on February 19 at $12.18. The pricing chaos only lasted a few days, and then prices reverted to the recent normal range, including $2.49 today: 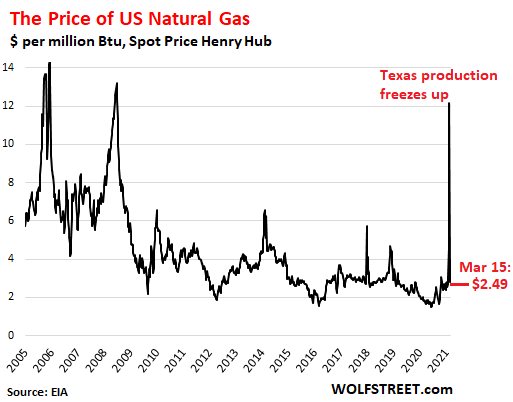 The price of LNG in Asia.

LNG prices at their destination in Asia began to surge last fall. Japan’s Ministry of Economy, Trade and Industry (METI) publishes average monthly prices of LNG at the time of arrival in Japan. In January, they hit $15.5/MMBtu on average and in February $16.3/MMBtu, having more than tripled from a year earlier: 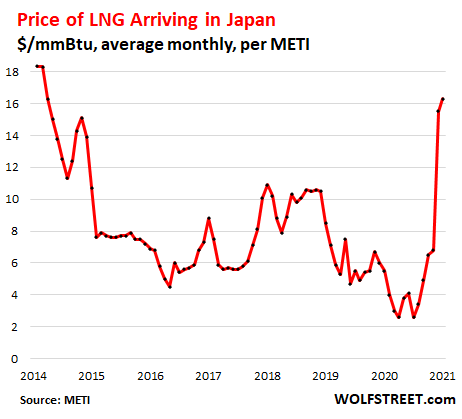 S&P Global Platts JKM reported that on January 12, the LNG benchmark for Asian spot LNG hit $32.49/MMBtu, the highest in the data, amid harsh winter weather in Asia that impacted shipping and LNG facilities, fired up demand, and created bottlenecks.

Those issues have settled down, supply from the US and other countries is ramping up, and Japan’s METI reported that average prices at the time of contract – they precede arrival prices – plunged 31% month-over-month in February (to $12.7/MMBtu) from January ($18.5/MMBtu). And arrival prices follow with a lag.

For LNG exporters everywhere, including in the US, the rich prices obtained in energy-starved Korea and Japan particularly, and to a lesser extent in China, are a big lure, and as production is ramping up again, the price spikes seen in Japan and elsewhere in Asia have already started to unwind.

US electricity generation from coal collapsed to record low in 2020, natural gas dominated, and wind and solar surged. Read… Electricity Sales to End Users Dropped Below 2008 Level: What it Says about the Pandemic Economy, Households, Commercial & Industrial Activity, and Public Transportation