“Lapse” in stimulus payments, bad weather blamed for retail sales decline, as inflation on durable goods hits 3.3%. Counting on next round of free money!

Here is the thing: Retail sales in February dropped 3.0% from January to $562 billion, seasonally adjusted, according to the Census Bureau this morning, much lower than “expected.” What gets blamed for the discrepancy? The weather, which in February was nasty in much of the country. But if these economists had looked at anything at all in February, they would have known that a big part of the country had frozen up, with massive rolling blackouts in Texas and elsewhere, for days in a row.

Also blamed was the “lapse in government aid” – as MarketWatch put it so elegantly – namely the $600 stimulus payments that started going out the end of December and were apparently all used up in January, now that retail sales apparently need free money to be sent to consumers permanently to maintain momentum.

And yet, retail sales in February were still up 6.3% from February last year, which isn’t too shabby, considering the horrible “lapse” in free money – soon to be rectified with more free money – and the inability to even go shopping for part of the time in part of the country: 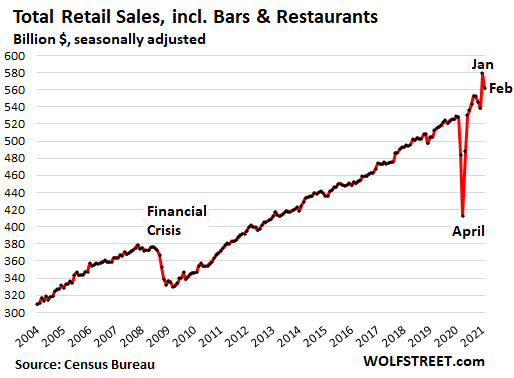 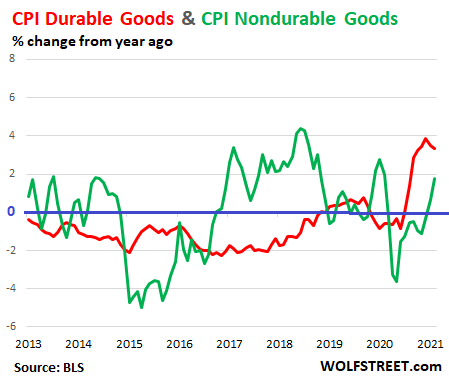 Sales at new & used auto dealers and parts stores fell 4.2% in February from January, to $116 billion, seasonally adjusted. Year-over-year, sales were up 9.9%. But there have been rampant price increases, including the used vehicle CPI, which surged 9.3% year-over-year. This is the largest category of retail sales, accounting for 21% of total retail sales: 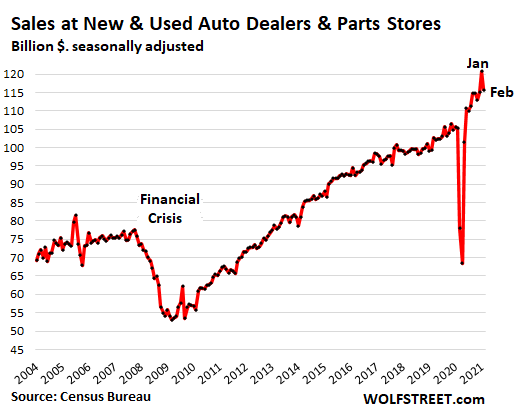 Sales at ecommerce sites and other “non-store retailers” (mail-order operations, stalls, vending machines, etc.) in February fell 5.4% from January to $87 billion, seasonally adjusted. But they were up by a huge 25.9% from a year ago, as the ecommerce boom continues unabated. Ecommerce has grown to be the second largest category in retail sales: 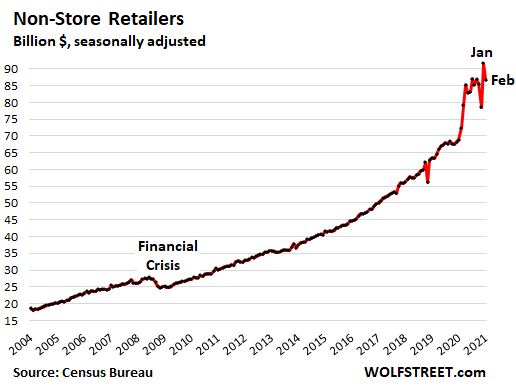 Sales at Food and Beverage Stores was flat in February compared to January, at $72 billion (seasonally adjusted) but up 12% from a year ago, amid the continued shift of consumption from the office, schools, restaurants, business trips, and vacations to the home: 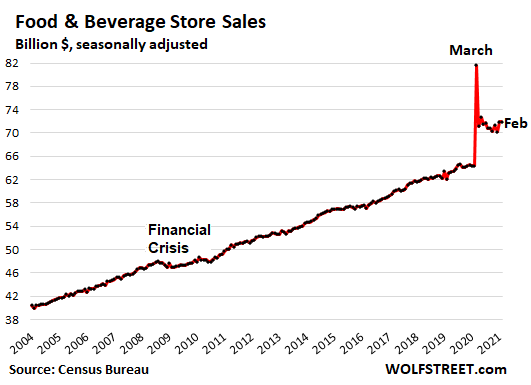 Sales at Restaurants & Bars ticked down 2.5% in February from January to $54 billion (seasonally adjusted), remaining in the same range since July, and down 17% year-over-year. This includes cafeterias, delis, fast-food joints, and other “food services and drinking places”: 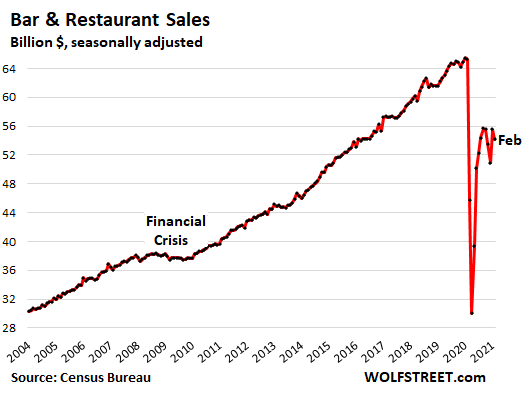 Sales at general merchandise stores (minus department stores) fell 4.9% in February from January, to $53 billion, but were still up 8.6% from a year ago. This includes sales at the brick-and-mortar stores of Walmart, Costco, and Target, but not their ecommerce sales, which are included in ecommerce sales (nonstore retailers): 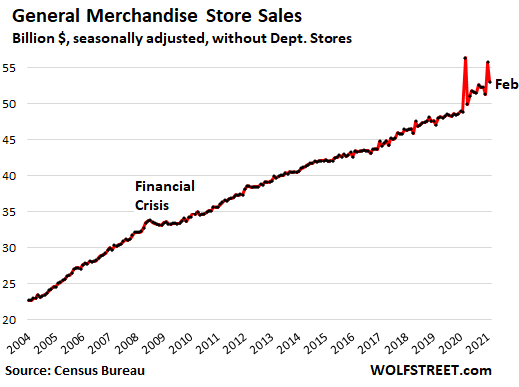 Sales at brick-and-mortar department stores plunged 8.4% in February from January and 14.5% from a year ago, to just $9.4 billion. From the peak in January 2001 to January 2021, sales have collapsed by 53%, despite 20 years of population growth and inflation. Dear landlords, department stores are not going to recover ever, as you can see from the chart. Consumers have decided that this way of shopping no longer works for them; they’d rather buy this stuff online. And the Pandemic has accelerated that shift: 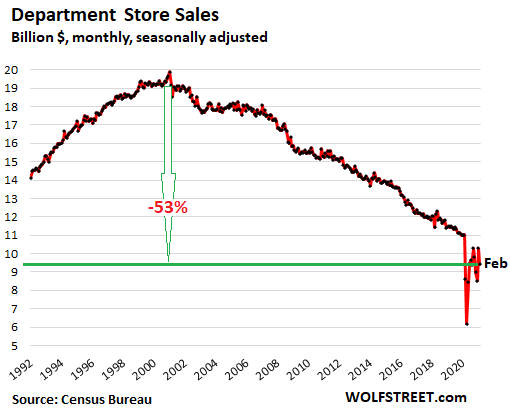 Sales at building materials, garden supply and equipment stores dropped 3.0% in February from January, to $39 billion, the second highest ever, and were still up a massive 14% year-over-year, attesting to the surge consumer spending on their homes: 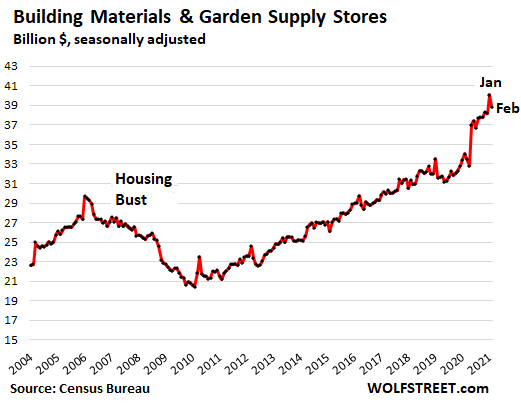 Sales at gas stations ticked up 1.4% in February from January and were up 3.6% from a year ago. But this wasn’t because Americans were finally driving a little more; on the contrary. It was because gas prices have surged.

At the end of February, the average retail price a regular was up 12% year-over-year, according to EIA data, and these ongoing price increases have been pushing gasoline sales higher in recent months: 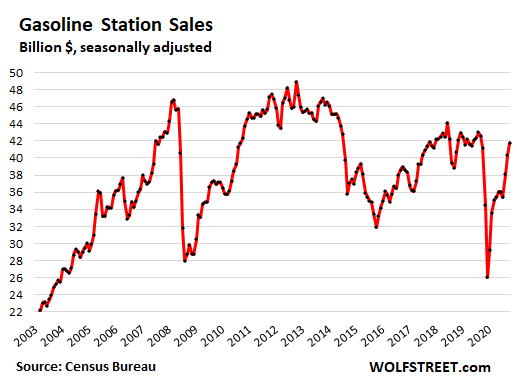 Sales at clothing and accessory stores fell 2.8% in February from January, to $19.6 billion, and were down 11% from a year earlier. Despite population growth and inflation, sales at these brick-and-mortar stores are flat with 2011 and are up only a smidgen from 2007. Americans, who’re buying more clothes than ever, have figured out just how easy it is to buy them online. And these brick-and-mortar stores, dear mall landlords, will not recover: 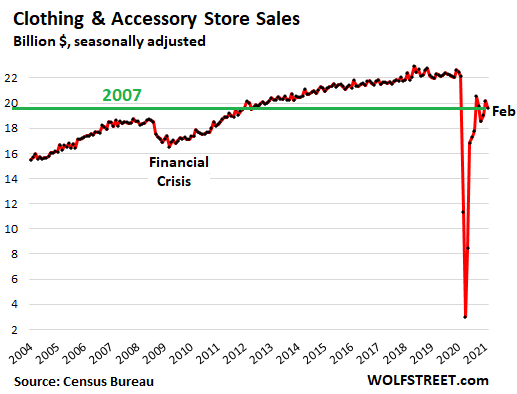 Sales at sporting goods, hobby, book and music stores fell 7.5% in February from January, to $7.7 billion, but were still up by 15% from a year earlier. These are sales at brick-and-mortar stores only and do not include ecommerce, where much of the sporting goods and books – see Amazon – are now getting purchased. And online sales of sporting goods have surged as people were locked out from their gyms and started working out at home or outdoors, leading to all kinds of shortages and bottle necks: 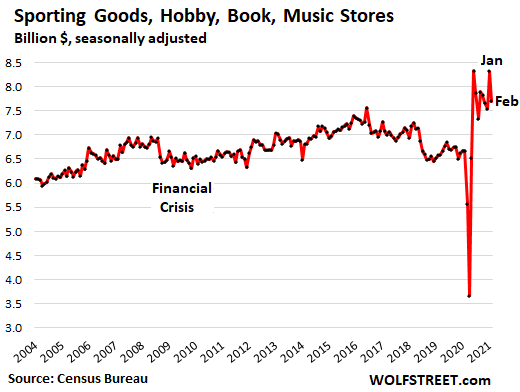 Sales at furniture and home furnishing stores fell 3.8% in February from January, to $11 billion, but were still up 8.9% year-over-year. Americans have also switched their furniture purchases to ecommerce with some of the biggest furniture retailers selling exclusively online. For example, revenues of online furniture retailer Wayfair soared by 55% to $14 billion in 2020. But the sales in the chart are just at brick-and-mortar stores: 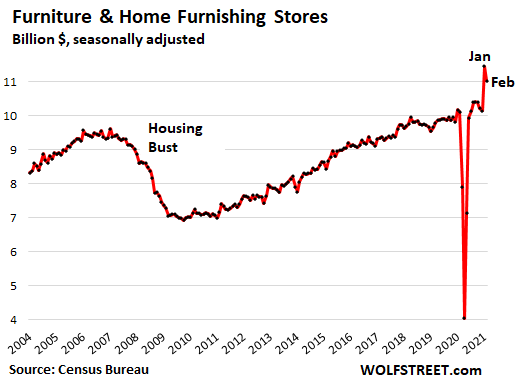 Sales at Electronics and appliance stores ticked down 1.9% in February from January, to $7.8 billion, and were down 3.1% year-over-year. Even though Americans are buying more consumer electronics and appliances than ever before, sales at brick-and-mortar stores peaked in 2008, and have wandered off to ecommerce.

Best Buy, which has had huge success in growing its ecommerce business, is closing stores when the leases terminate, and until then, it is using them as customer pickup and delivery centers.

Many other brick-and-mortar electronics retailers have been liquidated. The latest fatality is Fry’s Electronics, which announced on February 24 that it would cease operations and shut all of its 31 stores, blaming “changes in the retail industry,” namely ecommerce, and “the challenges posed by the COVID-19 pandemic,” which were just speeding up the process: 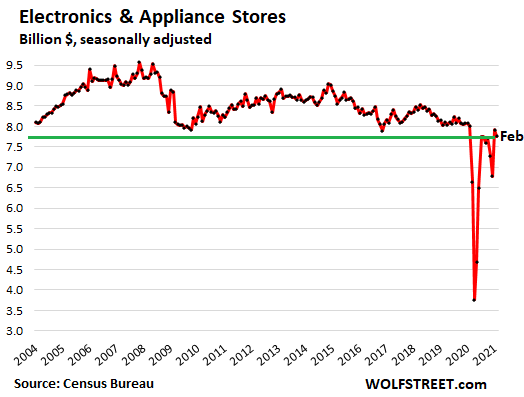 110 comments for “Can Retail Sales Only Grow if Americans Get Permanent Stimulus Payments in this Era of Free Money? That’s the Question Now”