Electricity sales to all end users in the US – households, office buildings, industrial buildings, and the like – have been on a dreary trajectory since 2008 for electric utilities overall in the US, despite economic and population growth, as these customers have invested in more efficient electrical equipment such as LED light bulbs and new air conditioners, and better thermal insulation, while at the same time, more manufacturing has been offshored.

And then came the Pandemic. By customer type, electricity sales show the shifts in the economy as millions of jobs evaporated, and as other jobs were switched from desk farms in office towers to working from home, while many retailers and restaurants closed, industrial plants reduced activity, and usage of commuter rail collapsed.

In 2020, total electricity sales to ultimate customers dropped by 3.9% to 3.66 million gigawatt hours, after having already dropped 1.2% in 2019, according to new data by the Energy Department’s EIA. These two drops brought electricity sales below the 2008 level: 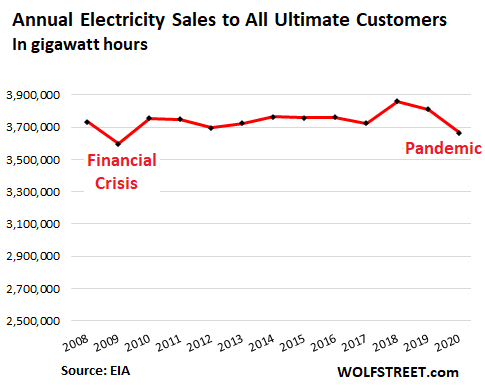 Electricity sales to residential customers ticked up 1.5% from 2019 to 1.46 million gigawatt hours, though they remained a tad below the record sales of 2018. Households who switched to work-from-home and learning-from-home saw the rising number of kilowatt hours they were paying for as they ran their air conditioners, heaters, computer equipment, lights, and other stuff all day long.

And heat played a role, with a number of states reporting a record hot July, followed by the third hottest August on record in the US overall. During that time, people were working at home all day, or were at home not working, and they were running their air conditioners, instead of cooling off at the place of employment. And this caused record spikes in electricity sales during those weeks.

Despite the large variance due to hotter or cooler summers and colder or warmer winters, there has not been much overall growth since 2010: 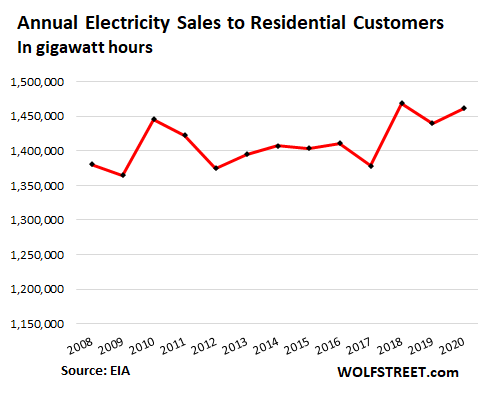 Electricity sales to commercial customers dropped 6.3%, to 1.28 million gigawatt hours, the lowest sales in many years. The category includes offices, retail, restaurants, and the like. Between 2008 and the record year 2018, electricity sales to these customers grew by just 3.4%, much of which was wiped out in 2019. And then the Pandemic hit: 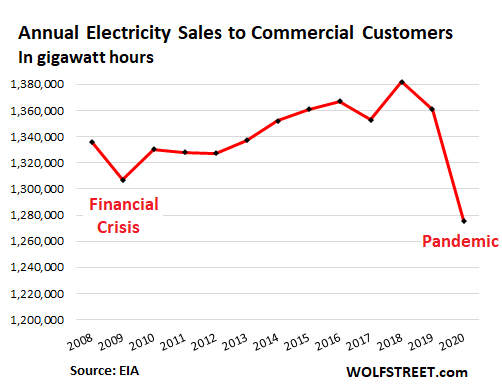 Electricity sales to industrial customers dropped 8.3%, to 919,533 gigawatt hours, the lowest since the Financial Crisis in 2009, when industrial activity plunged. Among these customers are manufacturers. Before the Pandemic, there had been no growth at all – a result of offshoring and use of more efficient equipment: 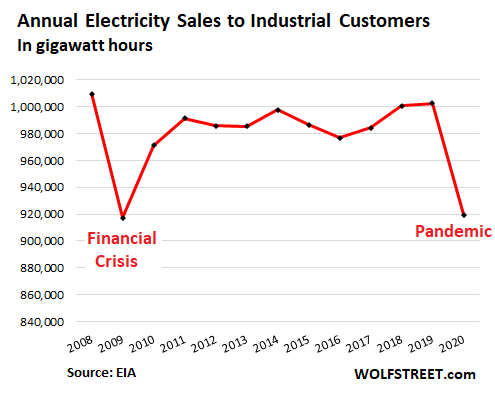 Electricity sales to transportation customers plunged 14.4% to 6,532 gigawatt hours, the lowest in many years. This includes subways and other electric rail systems, tramways, the infamous electric trolley buses in San Francisco and elsewhere, and even in a minuscule way the San Francisco Cable Cars, that haven’t run since March, whose cables are powered by big electric motors at the central cable car power house and museum on Nob Hill.

Many of the systems that continued running experienced drops in ridership of 80% or 90%, and they cut their services, but those trains that they do run still consume electricity even if mostly empty. From 2008 through 2019, electricity sales to these customers remained roughly flat: 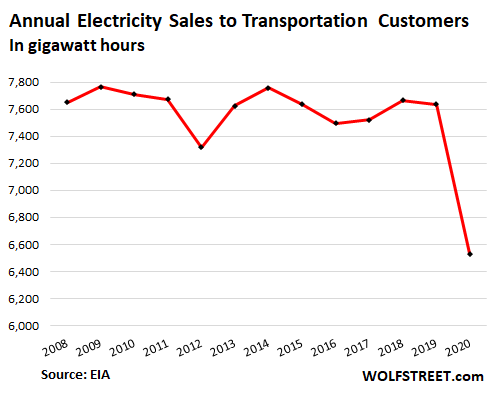 How was this electricity generated? By major category:

Natural-gas-fired power generation grew further in 2020 and totally dominated. Wind and solar continued to increase their importance, having surpassed hydroelectric in 2016, while hydroelectric and nuclear remained roughly flat, and coal collapsed further and to a record low share. The chart shows electricity generation by source, per year, in gigawatt hours – not “capacity,” but actual electricity generated and used. Details below: 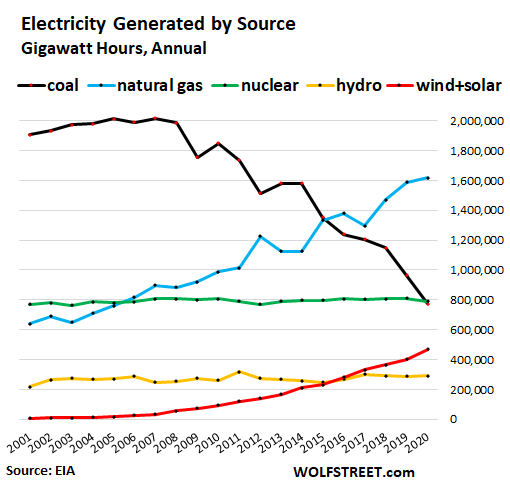 Cheap natural gas in the US – an outgrowth of fracking which has made the US the largest natural gas producer in the world and collapsed the price of natural gas starting in 2009 – and the technological innovation and commercialization in the 1990s of the combined-cycle natural gas power plant that reaches thermal efficiencies of around 65% has made natural gas the cheapest fuel for power generation. And coal hasn’t been able to compete for years.

Once called “king coal” because it totally dominated the power generation market, it was surpassed by natural gas in 2016 and by nuclear power in 2020. At this rate, it will be surpassed by the combination of wind and solar in two or three years.

Nuclear power generation declined by 2% to 789,919 gigawatt hours, beating coal for the first time in history. It has remained essentially flat since 2004. Its share of total power generated in 2020 ticked up to 19.7%.

Electricity generation from wind turbines and solar soared by 16.7% to a record 470,141 gigawatt hours, and their share in the total mix jumped to a record of 11.7%.

Alone, wind power generation jumped by 14% to 337,510 gigawatt hours, outdistancing hydro by a big margin (16%), after having surpassed hydro for the first time ever in 2019. Wind power’s share of total electricity generated rose to a record of 8.4%.

Hydroelectric power generation ticked up 1.1% to 291,111 gigawatt hours, for a share of 7.3% of total electricity generated in 2020. Long periods of drought, particularly in the West, can reduce hydro power generation. But that wasn’t the case in 2020.

134 comments for “Electricity Sales to End Users Dropped Below 2008 Level: What it Says about the Pandemic Economy, Households, Commercial & Industrial Activity, and Public Transportation”