The Consumer Price Index rose 1.7% in February from a year earlier, the fastest year-over-year increase in 12 months, picking up speed from the stall in April and May last year. Prices of goods are rising sharply, amid all kinds of shortages of durable goods after stimulus-fed red-hot demand, and food prices are rising too, according to data released by the Bureau of Labor Statistics today.

Price increases for services, the biggie, are held down by the battered discretionary services such as lodging, airline fares, and tickets for sporting and entertainment events, whose sales have collapsed. 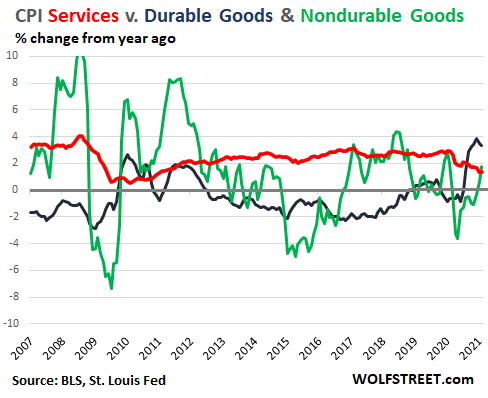 CPI for services (red line) rose 1.4% from a year ago, remaining at the lower end of the Pandemic range. This includes rent, homeowner’s equivalent of rent, healthcare services, insurance, but also airline tickets, and haircuts. Over the past decade, it has increased mostly between 2% and 3% year-over-year, but lost steam during the Pandemic as demand for services related to travel, personal care, events, and other areas plunged. For example:

Services, which dominate spending and CPI, is where inflation pressures will make themselves known because services account for two-thirds of the overall CPI.

Parts of the services economy have been hard-hit by the shift in spending from services to goods. And those sectors have responded by slashing capacity – and some purveyors of these services shut down for good. When this shift reverses, as people revert to buying airline tickets, staying at hotels, taking cruises, attending sporting and entertainment events, etc., this renewed demand will meet slashed capacity, creating price pressures that will feed into services CPI.

CPI for nondurable goods (green line) rose 1.7% from a year ago, the steepest increase in 12 months, after having dropped during the Pandemic amid collapsing prices of gasoline and other fuels. This category is dominated by the volatile prices of food and energy.

But gasoline prices are now rising. In February, the CPI for gasoline was up 1.5% from a year ago. And food prices in February rose 3.6%. This includes prices for food at employee sites and schools, where demand has collapsed, and where prices have plunged 24.5%, though I’m not sure how to track prices accurately when so many establishments of this type are closed.

CPI for durable goods (blue line) rose 3.3% from a year ago, remaining near the peak of the Pandemic price spike, amid reports of shortages, backorders, production delays, and transportation bottlenecks, as no one was prepared for the sudden and blistering demand for durable goods since spring.

This surge in durable goods CPI includes the historic four-month spike in used vehicle prices, skyrocketing 15% from June through October, but that is now gradually backing off. The used vehicle CPI was still up 9.3% year-over-year.

The price surge in used vehicles was not a result of blistering retail sales – retail sales of used vehicles have been running below year-over-year levels for nearly the entire Pandemic, including in February, according to data from Cox Automotive.

Instead, the price increases are more likely a result of a change in pricing power at the dealer level, which has been documented by the record surging earnings despite flat unit sales at AutoNation, the largest auto dealer group in the US. And consumers are now willing to pay higher prices – those that can afford to buy.

But the method of how CPI is figured makes sure that, even as used vehicles get more expensive every year, the index value of the CPI for used vehicles, after various ups and downs, has actually fallen since the year 2000, thanks largely to the infamous hedonic quality adjustments. 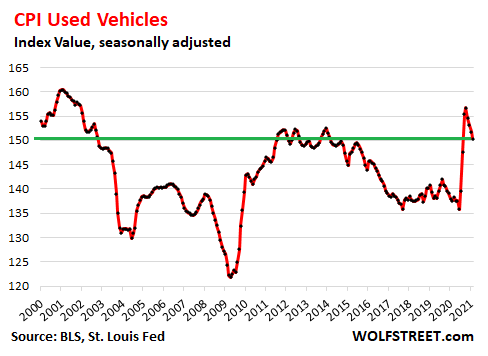 These infamous hedonic quality adjustments are also used to push down the new vehicle CPI, which has been essentially flat since 1997. 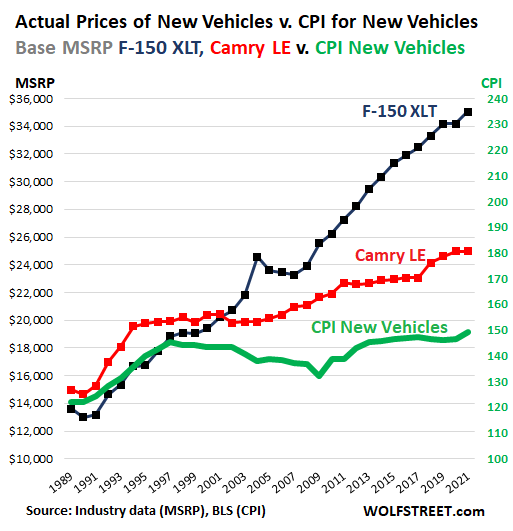 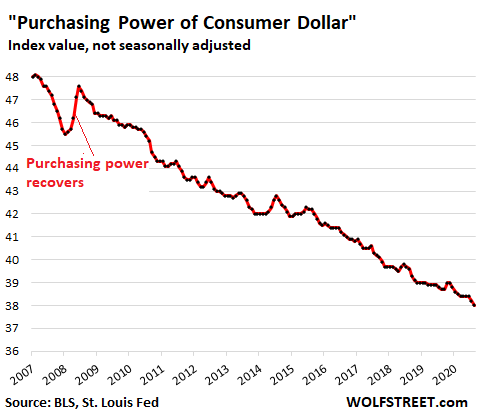 192 comments for “Dollar’s Purchasing Power Dwindles to Another Record Low. Fed is Getting its Wishes”