The New Regime at the US Treasury Department.

The reserve balances that commercial banks have on deposit at the Fed have spiked by $1 trillion since July, and by $333 billion over the past four weeks, including $89 billion in the week through Wednesday, to a new record of $3.6 trillion.  These are liabilities on the Fed’s balance sheet – money that the Fed owes the banks – and the Fed currently pays the banks 0.1% interest on those reserves. What’s behind this huge spike? 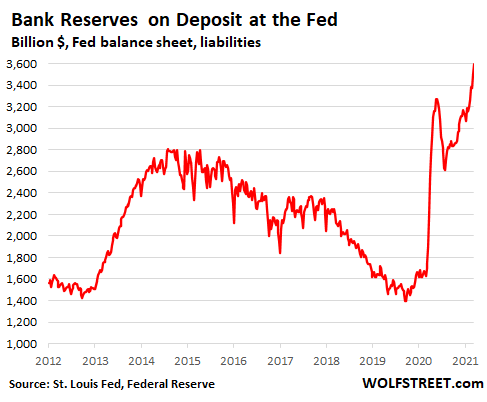 Some of it is still sitting in its vast checking account at its bank, the Federal Reserve, specifically the New York Fed. The balance in this “Treasury General Account” (TGA) spiked from around $400 billion in January and February 2020 to $1.79 trillion at the end of July 2020, as the funds raised from the enormous debt sales at the time weren’t spent as fast as they came in.

The New Regime inherited the TGA with $1.6 trillion in it. And it decided to draw down this balance to around $500 billion by the end of June, thereby reducing the balance in its checking account by $1.1 trillion. And so the government has reduced the amounts of Treasury securities to be sold at the scheduled auctions.

Over the past four weeks, the balance in the TGA account has already dropped by $266 billion, including a massive $110 billion in the week ended Wednesday: 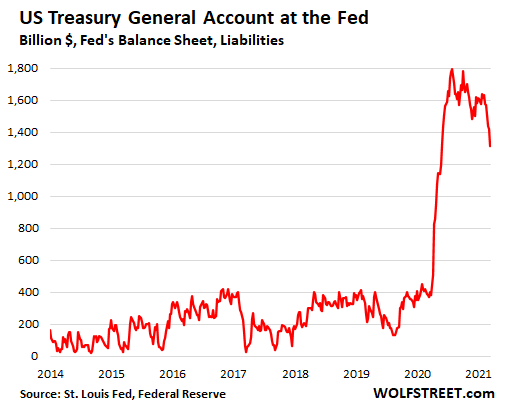 The Fed, as any bank, carries customer deposits as a liability on its balance sheet. By contrast, the QE events – the purchases of Treasury securities and MBS, the repos, swaps, and SPV loans – are happening on the asset site of the balance sheet. But the TGA is on the liability side, money that the Fed owes the government.

So the government is using the funds in the TGA to pay for its deficit spending, including the $600 stimulus checks that were sent out starting at the end of December.

Drawing down TGA makes sense. The government doesn’t need to have all this much liquidity sitting in its checking account, while at the same time carrying this huge debt.

As a result, the government’s debt has declined since March 1, to be roughly flat with mid-February; and in January, it has risen more slowly than the horrendous spike that started in March, despite the red-hot pace of spending.

The insert in my Debt-out-the-Wazoo chart shows the details over the past three months. Obviously, drawing down the TGA balance represents just a minor and temporary slowdown in the incredibly spiking US National Debt: 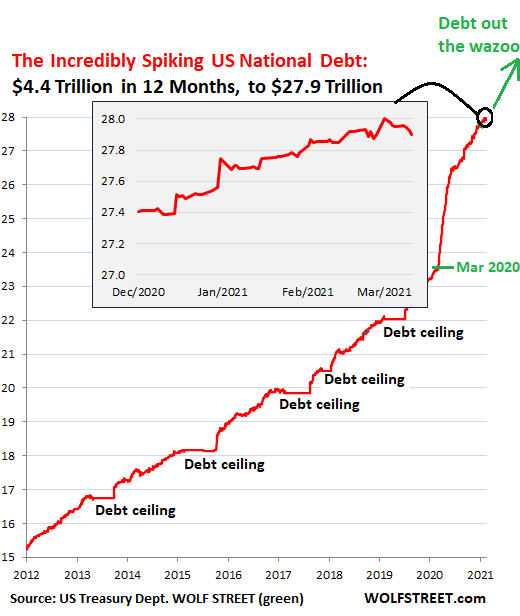 The Treasury Department is reducing its checking account balance by spending this money faster than it is raising funds through new debt sales. When the government sends out a tax refund check or a stimulus check or pays for a contract, these checks or electronic transfers arrive at the recipients account at a commercial bank. The bank then presents them to the Fed for payment from the TGA.

And you guessed it, as the balance in the TGA has plunged, the reserve balances on deposit at the Fed have spiked to a new record of $3.6 trillion. See the first chart above.

So this process of reducing the government’s TGA account balances has the roundabout effect of replacing Treasury securities on the banks’ balance sheets with reserves – sheer outright liquidity.

But there are all kinds of side effects, with so much Fed-created liquidity washing through the system, and changing hands, creating these massive distortions.

The current turmoil in the repo market is part of those side effects. This time around, the turmoil is the opposite of what it was in late 2019. Back then, repo rates had panic-spiked to 5%, 6%, and higher as lenders had pulled away, and forced borrowers were getting desperate. The Fed stepped in as lender of last resort to bail out these forced borrowers — such as hedge funds and mortgage REITS — which calmed down the repo market.

What happened last week was that there was so much demand in the repo market – not for cash, as in the fall of 2019 – but for these recently issued 10-year Treasuries. Participants (effectively the lenders) bid up the price of the Treasuries so high that their yield turned negative to -4.5% for them. In other words, they had to have the Treasuries, and didn’t care about how much they had to pay to get them.

And that sudden selling by the Fed of its Treasury securities, ladies and gentlemen, would have been a hoot to behold. And so the Fed did nothing and let things play out.

The deeply negative repo rates on 10-year Treasuries have raised concerns in certain corners of Wall Street that otherwise clamor for more QE that the Fed has pushed QE too far, and that some aspects of the markets are starting to malfunction.

To let some hot air out of the markets? As long as it isn’t “disorderly.” Read…  Yellen Coddles Up to Powell on Rising Long-Term Yields as a Welcome Sign of Recovery. Wall Street Crybabies Not Amused

179 comments for “What’s Behind the Huge Spike in Reserves, a Liability on the Fed’s Balance Sheet?”