Everyone is waiting for Americans to start flying again to get back to “Normalcy,” as it’s now called. So where are we now? On average over the past seven days, 1.09 million passengers per day passed TSA checkpoints at US airports, the highest since the collapse of air traffic a year ago, eking past the beaten-down holiday period at the end of 2020 and early 2021.

It was still down by 53.2% from the same week in 2019, a tad worse than the year-over-year drop during the holiday period. One year after the collapse of air travel, the hoped-for V-shaped recovery still looks dismal. But the trends, if you squint just right, show slight improvements in recent months: 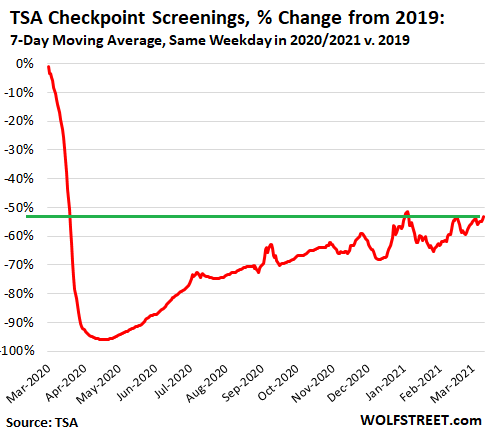 The Department of Transportation released its preliminary data on air travel today, as reported monthly by the airlines to the Bureau of Transportation Statistics (BTS), which provides more detail, but lags a little behind: In January, domestic air travel, as measured by the number of airline passengers, was down 63% year-over-year; and international travel on US air carriers was down 68%.

The BTS, beyond the preliminary data for January, also released detailed data for December, covering all US air carriers and all US airports. In terms of “revenue passenger-miles” – the number of passengers and miles flown: total air travel in December fell year-over-year by 66% to 30.8 billion passenger-miles flown: 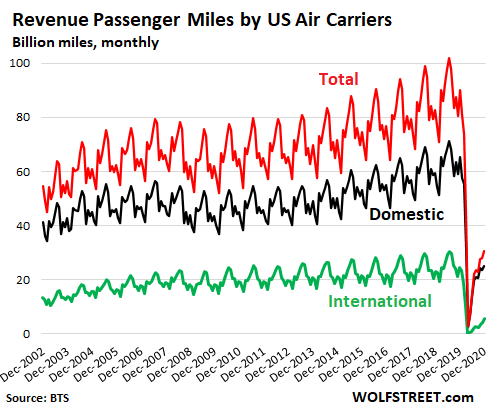 Business travel may not return to Normalcy for years, if ever.

Business travel, according to numerous travel industry and corporate contemplations, will eventually resume, but only for situations where contractors, employees, or executives really need to be present in person. The rest of business travel, along with the expenses and loss of time, has been replaced by video conferencing, and the results have been good, and corporate cost cutters and efficiency experts are loving it, and business travel’s normalcy will look vastly different — meaning lower – than it did before.

Hopes for leisure travel are higher.

The hopes for leisure travel – to go on vacations or to see friends and family or to maintain long-distance relationships – are higher, and there is even talk about pent-up demand, with people flying on vacations three times a year instead of twice, for example.

But leisure travelers, to the exasperation of the airlines, are assiduous fare-shoppers who will try everything in the book to get the cheapest acceptable ticket to where they’re going. And the internet makes comparison shopping easy.

Pent-up demand of the wrong kind.

In addition, many people have ended up with unused tickets to international destinations from last spring when these flights were cancelled amid widespread restrictions on crossing borders, and they haven’t gotten their money back from the airlines. Instead they got “credits” to be used in the future, or they have the ability to use the ticket in the future without change-fee.

These pent-up travelers with such already paid-for but on-hold arrangements are hoping to use these credits or tickets to eventually fly to Japan (such as my wife), China, Europe, and a million other destinations.

When this wave finally starts rolling into airports — after border restrictions and impossible-to-navigate inconveniences, such as long quarantine requirements, are lifted – it will show up in travel data, such as the TSA’s checkpoint screenings. But for airlines, this wave of pent-up travel demand means zero revenues and cash-inflow, because that was taken in a over a year ago, but lots of expenses and cash-outflow since they will then have to provide the services. Pent-up demand of the wrong kind.

It will be interesting to see what kinds of restrictions US air airlines will impose on people with these credits or tickets that they’d paid for over a year ago — such as making only a few seats available for them per international flight, and perhaps only middle seats in the back?

147 comments for “Long Way to “Normalcy”: When Will Americans Return to Flying for Vacation and Business?”