When Yellen was asked about the rising long-term yields that the crybabies on Wall Street are getting so nervous about, Yellen said in her quiet manner: “Long term interest rates have gone up some, but mainly I think because market participants are seeing a stronger recovery, as we have success with getting people vaccinated and a strong fiscal package that’s going to get people back to work.”

“Rising interest rates don’t concern you?” she was then asked.

“I think they’re a sign that the economy is getting back on track, and market participants see that, and they expect a stronger economy,” Yellen said. “And instead of inflation lingering below levels that are desirable for years on end, they’re beginning to see inflation get back to a normal range of around 2%.” And inflation may rise more than that, but it’s going to be transitory, she said.

So on Friday, the Treasury 10-year yield rose to 1.57%, still ludicrously low, given the outlook on inflation, and given the Fed’s insistence that it will let inflation run over 2% – as measured by “core PCE,” the inflation measure that nearly always produces the lowest inflation readings in the US. But that 1.57% was nevertheless the highest since February 14, 2020: 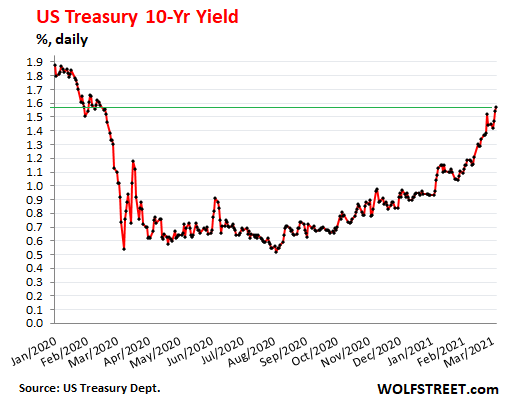 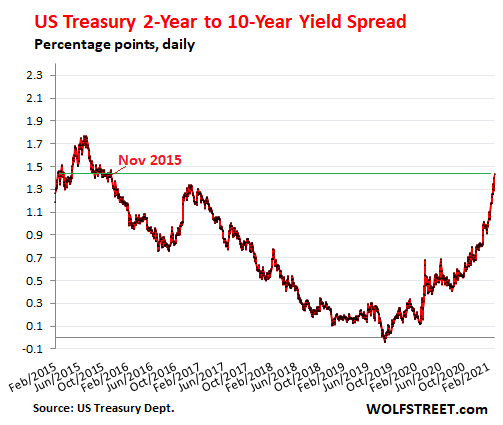 This rise in the 10-year yield has set off clamoring among the crybabies on Wall Street for the Fed to do something to bring them down. They have already outlined the remedies, including prominently another “Operation Twist,” where the Fed sells Treasury securities with short maturities and buys Treasury securities with long maturities. This concentrated buying of long-dated Treasuries would raise their prices and thereby push down their yields.

The Wall Street crybabies are clamoring for this because massive highly leveraged bets on Treasury securities are producing massive losses.

Even mundane conservative-sounding Treasury bond funds focused on long maturities are taking growing losses. Since the low point in the 10-year yield last August, the share price of the iShares 20 Plus Year Treasury Bond ETF [TLT] has dropped by 19%.

The Fed has been responding in a unified voice to indicate that rising yields are a sign of strength, and that as long as they’re a sign of rising strength and not of some tightening in the financial conditions, it would let them rise.

It’s amusing that Yellen has now coddled up to Powell and is singing from the same hymn sheet with Powell to push against the crybabies on Wall Street.

Her expression of comfort with higher long-term yields and rising inflation expectations came the day after Powell laid out the Fed’s position in an interview with the Wall Street Journal.

The Fed expects inflation to move up for two reasons, Powell said in the interview. The “base effect,” with the inflation index having dropped in the spring last year; and a “spending surge” that could lead to “bottlenecks” as the economy reopens, which could create “some upward pressure on prices.” But the Fed is going to brush off the “one-time effects,” and any “transitory increase in inflation,” and it’s going to be “patient” with rate hikes, he said.

The speed of the rise in long-term yields “was something that was notable, and caught my attention,” Powell said. “But again, it’s a broad range of financial conditions that we’re looking at, and that’s really the key; it’s many things. We want to see and would be concerned if we didn’t see “orderly conditions” in the markets, and we don’t want to see a persistent tightening in broader financial conditions. That’s really the test,” he said.

So the Fed would let long-term yields do what they might and see them as a sign of economic strength and welcome higher inflation expectations, as long as conditions are not “disorderly,” as long as the 10-year yield zigzags up in an “orderly” manner and doesn’t go overboard, and as long as a “broad range of financial conditions” remain accommodative – and they’re still “highly accommodative,” Powell said.

On the other hand, if markets become disorderly again, as they were in March, “the Committee is prepared to use the tools it has to foster achievement of its goals,” he said.

He refused to nail down at what level of the 10-year yield the Fed would get nervous and start rummaging through its toolbox. But apparently, that point isn’t around the corner just yet.

The effect is that higher long-term yields are letting some of the hot air out of the markets. And the Fed may be encouraging it, as long as it’s “orderly.”

The bond market has been getting hammered for months, with big losses scattered across Treasuries with long maturities and investment-grade corporate bonds. The housing market will eventually respond to rising mortgage rates, and mortgage rates started rising in early January.

But junk-bond yields have barely ticked up from astounding record lows. Demand for these instruments remains red hot, amid record issuance so far this year. This enthusiasm for junk bonds – which allows all kinds of wobbly companies to fund their cash burn – is a sign of “highly accommodative financial conditions.”

206 comments for “Yellen Coddles Up to Powell on Rising Long-Term Yields as a Welcome Sign of Recovery. Wall Street Crybabies Not Amused”