They’re not the same consumers.

There is no monolithic American consumer. Each does their own thing. And the folks with credit card debts and other revolving credit such as personal loans – all of it high-interest rate debt – paid them down by record amounts in January, possibly using their stimulus money to do so.

And in the opposite direction, the folks who own homes have been extracting cash from their homes via cash-out refinancing their mortgages at a clip in Q4 not seen since the peak of the good old days before the housing bust in 2005 and 2006, and at record low mortgage rates while they lasted. But those two groups may not be the same people. 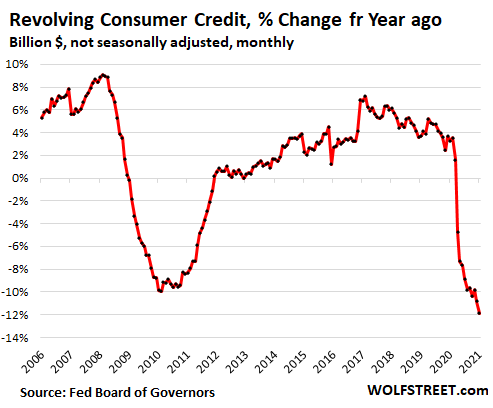 There were only two periods in credit card history when balances dropped on a year-over-year basis, and for two very different reasons: First, during the Financial Crisis when consumers defaulted on their credit cards; and second, during the Pandemic when the government sent hundreds of billions of dollars in waves of stimulus payments to consumers, and some of this money was used to pay down credit card debts.

The cumulative two-year plunge during the Financial Crisis was larger than the drop during the first 10 months of the Pandemic. But the next stimulus packages is being put together in Congress, likely producing further drops in the future: 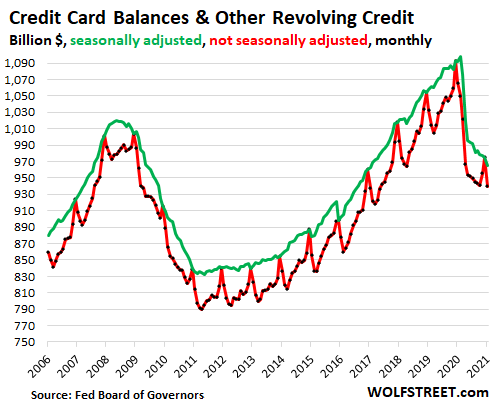 In the opposite direction: Cash-out Refis.

Historically low mortgages in the fourth quarter triggered a historic mortgage refi boom that exceeded the peaks before the housing bust. Amid this historic refi boom was a near-historic cash-out refi boom. According to a New York Fed report two weeks ago, the amount that homeowners extracted from their homes  in Q4 spiked to $63 billion, with borrowers on average extracting $27,000 from their homes (chart via New York Fed): 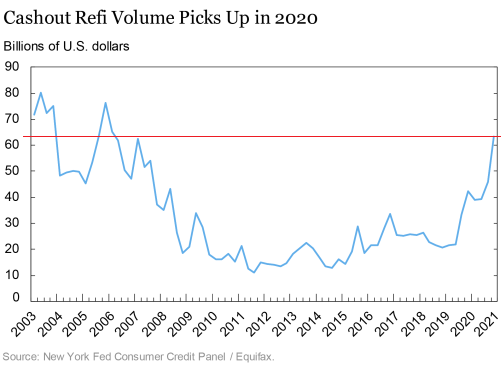 Homeowners used the proceeds from the cash-out refis to fund consumption and “investment opportunities, including home improvements,” as the New York Fed said.

But it is also possible that there is little overlap between these two groups – between those who paid down their credit cards, and those who increased their mortgage debts via cash-out refis.

In other words, it’s possible that people with credit card debts paid them down with their stimulus checks, but they may not own a home, or cannot do a cash-out refi because their credit score is too low, or because they don’t have enough equity in their home, or because their mortgage is in forbearance and/or delinquent – over 17% of FHA mortgages are delinquent, including those that were delinquent before they entered into forbearance.

So the theory that most of the cash-out refis were used to pay down expensive credit card debts doesn’t hold water. These are different consumers. As the New York Fed pointed out, the cash-out refis were mostly used to fund consumption or home improvements, such as a new deck and hot tub, which has been back-ordered because of the surge in demand, or speculative investments in what were then seemingly forever booming financial markets. 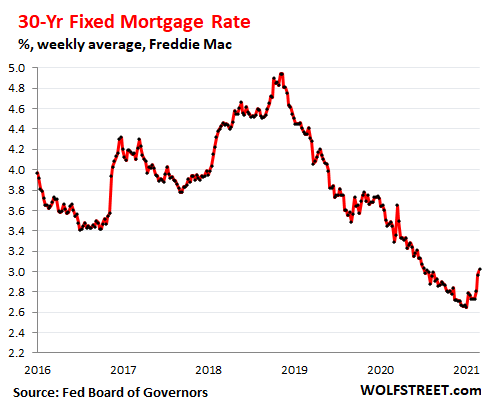 Mortgage rates remain ultra-low by historical standards, but they’re a little higher than they were two months ago – and there has now been a lot of hand-wringing in the financial markets about them, and folks have been clamoring for the Fed to do something to push down those mortgage rates, which has not been forthcoming at all.

But the more mortgage rates rise, the harder it is to make cash-out refis work. So while some consumers are creating a little extra room on their credit card for future consumption, other consumers will find cash-out refis to fund consumption more expensive and difficult to do.

172 comments for “Consumers Paid Down Credit Cards Again! By Most Ever. But Cash-Out Refis Spiked to Highest since 2005/6 Peaks. What Gives?”