In February, “households” reported that 150.2 million people were working – including gig workers – bringing the number of working people back to a level first seen in December 2015  (red line in the chart below), according to the Bureau of Labor Statistics’ jobs report this morning. This was up by 208,000 from January. Over the four months since October, households reported an increase of 570,000 jobs.

The BLS basis its jobs data on two separate surveys: of households and of “establishments” – companies, non-profits, and government entities, not including all self-employed people. These establishments had 143.05 million employees (green line) in February, up by 379,000 employees from January. Over the four months since October, formal employment at establishments has risen by 503,000 jobs. 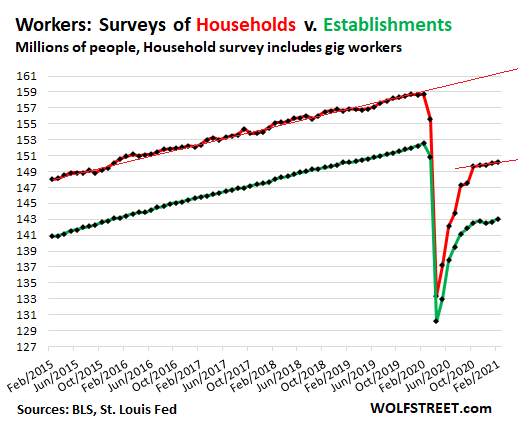 Not catching up with the Trend during the “Good Times.”

If the number of people with jobs had remained on the same trend as during the Good Times since 2015, there would now be around 161.2 million people with jobs (top red trendline in chart above). But the difference between the Good Times trend and the last four months (lower red trend line) has widened a tad – when it should have continued to shrink.

Households reported a similar trend: In February, the number of people with jobs was down by 8.49 million compared to February last year, slightly better than the 8.69 million year-over-year drop reported in October.

The number of people deemed by the household surveys to be in the “labor force” – either working or not working but actively looking for a job, depending on how people answer specific questions on the survey – ticked up a smidgen in February from January but has gone nowhere since July: 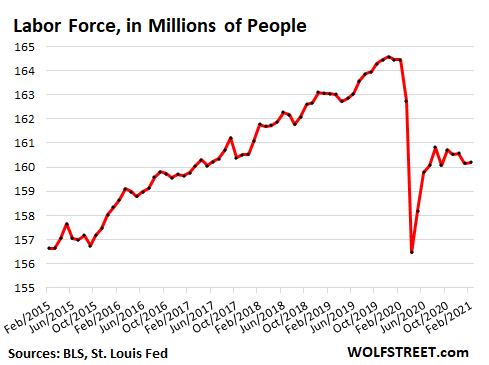 The employment-population ratio, which is the broadest measure of employment and covers the working-age population (16 years or older), ticked up to 57.6%. It has gained a minuscule 0.2 percentage points since October (57.4%): 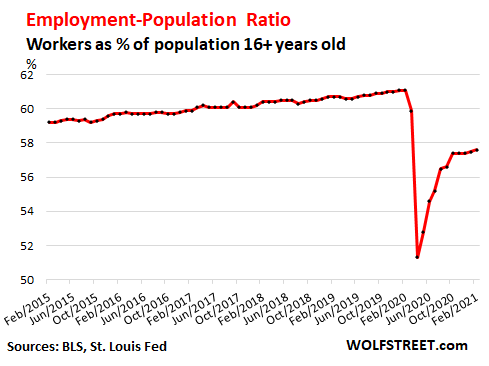 Long-term, the Employment Population Ratio is one of the most dismal two-decade trends out there. The ratio drops during each recession – that much is normal – but until 2000, the ratio more than recovered each time. In the three recessions since 2000, it never fully recovered before the next recession hit, a testimony to companies trying to bring their costs down by sending work overseas or automating it away: 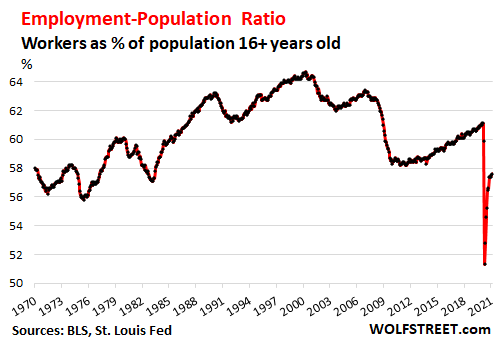 To summarize, the February jobs situation has remained on trend since October with uneven improvements that are just a tad above or below the improvements from the same period a year earlier, as the initial V-shaped jobs recovery petered out in October about two-thirds into it.

94 comments for “The Jobs Recovery, Compared to the “Good Times” Trend”