From fake “office shortage” to historic glut in no time.

Oracle, after announcing in December that it would move its Corporate Headquarters from Redwood City in Silicon Valley to its campus in Austin, Texas, and after putting its 17-story office tower in San Jose up for sale, thereby becoming part of the California Techsodus, has now put four of the five floors it leases in San Francisco on the sublease market. The listing was first reported by the San Francisco Business Times. Oracle’s lease on these four floors — 85,622 square feet in total — in the 21-story tower at 475 Sansome Street in the Financial District runs through June 30, 2023. More office space that needs to find occupants was thereby dumped on the already record high San Francisco sublease market.

At the end of the fourth quarter, sublease office space jumped to 7.23 million square feet (msf), according to Cushman and Wakefield – an all-time record high, exceeding by a huge margin the peak during the Financial Crisis and the Dotcom Bust. Sublease space accounted for 52% of the total vacant office space.

Total vacant office space, sublease and direct lease combined, blew by the prior records set during the Financial Crisis and the Dotcom Bust to reach 13.9 msf (chart via Cushman & Wakefield): 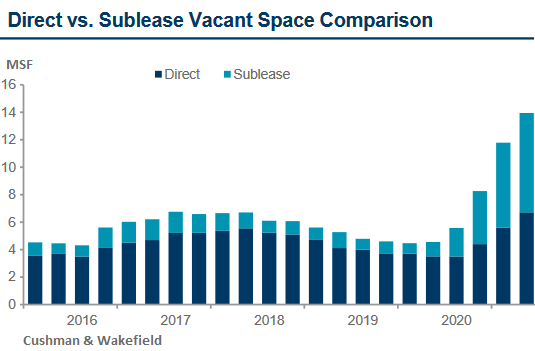 From fake “office shortage” to historic office glut in no time.

A good part of this office space now on the sublease market has been leased by companies that never needed this space and were just warehousing it on the assumption that they might grow into it in future years, and they hogged this space to make sure they had enough space in future years amid what was considered an “office shortage” at the time, and by hogging office space they didn’t need and that remained vacant, they contributed to, or even created, this “office shortage” and some of the highest office rents in the US. That kind of hype-and-false-narrative-based shortage can turn into a glut in no time.

Sublease space is pernicious for the office market – and good for those looking for deals – because companies that are leasing it from landlords have been paying for the lease, and will continue to pay for the lease, and by subleasing it at any amount, they can improve their bottom line. They don’t have to have a particular minimum to make their equation work. And they will cut deals to get some other company to agree to sublease that space from them.

By comparison, during the Dotcom Bust, which had ravaged San Francisco, new leasing activity bottomed out at 933,000 sf in Q2 2001 (chart via Cushman & Wakefield). 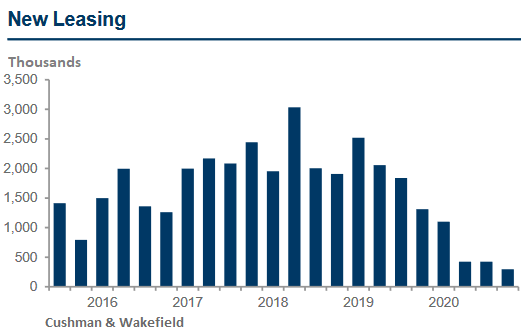 But leasing activity has been declining since mid-2019, with Q4 2019, hitting a multi-year low already. So this was something that had been brewing for a while, and the Pandemic put it into hyperdrive.

And office rents are dropping.

This puts Oracle’s sublease in a new light. The four floors that Oracle has put on the sublease market in San Francisco, which are in a Class A building, are priced at $60 per sf, according to sources of the Business Times; compared to the average asking rent at Class A buildings in the North Financial District, where Oracle’s office space is located, of $81.10 (according to Cushman & Wakefield data). Oracle’s asking rent would be 26% below the already dropping Q4 asking rent.

And depending on what Oracle’s own rent on that space is — it has occupied this space since 2007 — if it succeeds in subleasing that space at $60 per sf, it might actually make a little money. But it would put downward pressure on the overall office market because it would mark the rent at which there’s demand for this type of office.

This is what happens when 7.2 msf of sublease space in what is a relatively small office market – compared to Manhattan or Houston – are trying to attract interested parties. And going forward? Cushman & Wakefield sees this scenario: “Asking rents are expected to ease further during 2021 in response to the elevated vacancy, weaker demand, and the pressure brought on by sublease space ‘priced to move.’”

Americans are watching more movies than ever, but they’re watching at home. The studios are on board in a big way. Read… After 17 Years of Falling Ticket Sales, Movie Theaters Got Annihilated in 2020