Americans are watching more movies than ever, but they’re watching at home. The studios are on board in a big way.

Movie theaters have for years been dogged by a structural shift in how Americans increasingly watch movies: at home on a big screen. The whole family can watch for a song, and popcorn is cheap. Box office sales peaked in 2002 at 1.58 billion tickets. By 2019, sales had dropped 22% to 1.23 billion tickets, despite 17 years of population growth. On a per-capita basis, ticket sales plunged by 31%. This was part of the long-running brick-and-mortar meltdown that also sank department stores. Then came the pandemic.

Amid theater closures across the US during parts of the year, and insurmountable reluctance by many potential moviegoers to go to the theaters that were open, box-office ticket sales in 2020 collapsed by 82% to just 224 million tickets, according to movie data provider The Numbers. It may well have been the worst year since the era of talkies began: 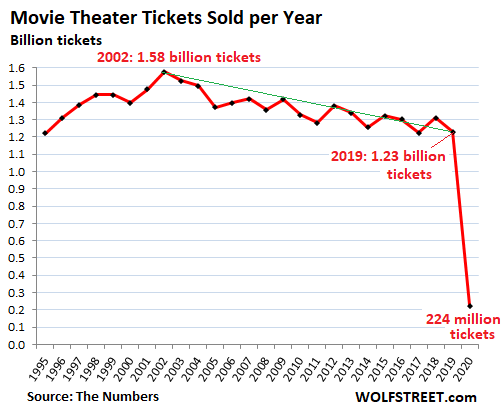 Through 2019, the way movie theaters tried to deal with this structural decline in moviegoers was by raising ticket prices, offering big comfortable chairs to justify those ticket prices, installing bars with overpriced beer and food, and cranking up prices for popcorn and sodas. Fewer people paying a lot more money was the trick to maintain revenue growth.

And because going to the movies got so expensive and because much cheaper options have increasingly been available on the big screen at home, the number of tickets sold continued to drop. Go figure.

The average ticket price has increased by 100% since 1997 to $9.16 in 2019 and 2020, according to The Numbers. Over the same period, the inflation index CPI has increased 64%. In many markets, tickets are cheaper. In others, tickets are much higher. In San Francisco, when theaters were still open, a ticket at a multiplex without specials would set you back about $15. The chart shows the average ticket price, based on total box office revenues divided by total tickets sold: 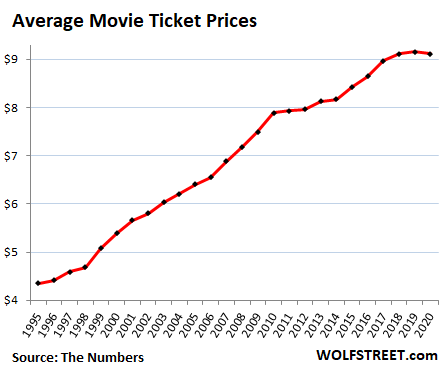 The surge in ticket prices successfully outpaced the decline in the number of tickets sold through 2018. And box office revenues rose through 2018, reaching a record of $11.9 billion. However, in 2019, revenues fell. And in 2020 revenues collapsed by 82% to $2.05 billion: 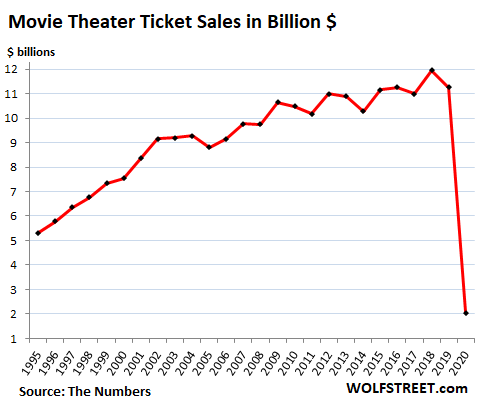 The 10 top grossing movies in 2020, all of them, were released before the Pandemic, either in December 2019 or in early 2020. Everything that was released after mid-March completely fizzled in movie theaters – and people were watching them at home as streaming exploded (data via The Numbers):

Cinema chains and independent theaters are teetering near the brink. The stimulus bill that was passed in December has some money for small cinema operators. AMC, the largest movie theater chain, is currently trying to raise new funds by selling shares at $2.50 a share to stave off a bankruptcy filing.

But Americans are watching movies more than ever. They’re just watching them at home. That trends started years ago. And it exploded during the Pandemic.

Disney announced in October that its “creative engines will focus on developing and producing original content for the Company’s streaming services,” after having already released “Mulan” directly on its one-year old and booming subscription service Disney+ where the entire family could watch it for $29.99. On December 25, Disney released its Pixar animated movie, “Soul,” on Disney+ instead of in theaters.

Going forward, at some point the Pandemic will fade, as pandemics do. But who will be returning to the movie theaters to watch something they could watch at home for less, when movies are released simultaneously in theaters and on streaming services?

Surely, there will be some people who love going to the movies, people who want to make an event out of it. They might sandwich it between dinner and drinks, or vice versa, like people going to plays, musicals, the opera, concerts, comedy shows, etc. But the numbers are just not the same. Movies are for the masses. They’re for everyone. Big multiplexes are everywhere to serve the masses.

The long-term downtrend of ticket sales was dismal enough before the Pandemic. Now the Pandemic has shown consumers and studios alike that debuting a movie on their streaming services works.

The hope is that pent-up demand will emerge after the Pandemic and that there will be a burst of moviegoers who want to get out of the house and gorge on a bucket of overpriced popcorn with fake butter and be surrounded by hundreds of people, all watching the same thing with rapt attention. It’s an American ritual. And the hope is that this ritual doesn’t fall by the wayside. Everyone is counting on this pent-up demand.

But then there are the long-term trends that the Pandemic accelerated. Streaming isn’t going to just disappear. And since the big studios have their own streaming services, the profit motive comes into play from that side of the equation – they no longer need theaters as much.

209 comments for “After 17 Years of Falling Ticket Sales, Movie Theaters Got Annihilated in 2020”