“Keeping a business alive that is generating no revenues is an uphill struggle,” Pol told me. He and two partners own Hostal Live Barcelona, a small two-floor hostel in the center of Barcelona that has been closed since March. “The only reason we are still going is that we qualified for the emergency loan in March. As our bank manager told us at the time, the only reason we qualified for that loan is that we had no debt and some savings, which we had planned to spend on expanding the business. Now those savings are being used just to keep the business alive.”

“It was such an easy business to run,” Pol says. “So many tourists were coming to Barcelona that all you needed to do was offer a clean, comfortable bed in a central location and market it online and someone was bound to fill it.”

Bankruptcy proceedings in the sector were up 60% in November on a year ago. Most of the hotels affected are small or medium-sized, with fewer than 100 rooms. Many other hotel owners now face the problem of trying to sell their business at a time that many others are trying to do the same.

“We have seen prices on some websites that blow your mind,” says Pol. “Some places we’ve seen are being offered at barely over half the price they would have gone for just a year ago.”

Pol is not a full-time hotelier. He’s an automotive engineer who recently returned to his job after months on furlough. His partners are in the IT business. They entered the hotel business together in 2013 with the purchase of a small one-floor licensed hostel on Barcelona’s Gran Via de les Corts Catalanes. In 2015, they expanded the business by purchasing a license to convert another floor in the same building into tourist accommodation space. By that time, the hostel had 17 beds and six workers on their payroll.

The hotel was open for only six months, from its inauguration in September 2019 until March 2020, when it closed due to the Pandemic, and hasn’t reopened since, like roughly three quarters of the hotels in Barcelona. ASG, which will lease the building back to Nobu Global, has not disclosed the price of the deal, but industry sources cited by El País say that Selenta originally acquired the property for around €100 million and has now sold it for approximately €80 million. 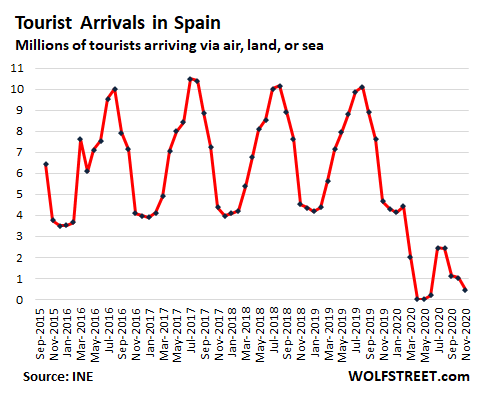 For the hotels that have stayed open since March, revenues have collapsed by roughly half, according to the industry group Hosteleria de España. Smaller family-run hotels have been particularly hard hit. They have had to keep paying fixed costs such as rent and taxes while generating zero or next-to-zero income. Having exhausted their rainy day funds (assuming they had any) and then burned through the largely government-guaranteed Covid-19 emergency loans (assuming they were lucky enough to qualify for one), many of them cannot hold on any longer, or are simply throwing in the towel.

The problem is not just the growing glut of hotels hitting the market but also the paucity of buyers. In 2020, just 77 hotels changed hands in a country of over 17,000. And almost all the buyers were institutional investors like ASG.

For Pol and his partners things were going so well that they had begun planning to further expand the business, setting aside much of the money they made for reinvestment. The long-term plan was to make enough money to be able to stop doing their day jobs and dedicate all their time and energy to the hostel business. But then Covid hit.

“We haven’t reopened since March 15, though we thought about it during the summer,” Pol says. “It costs a lot of money to open a business like this and so few people were coming to the city that it made more financial sense to stay closed and try to weather the storm by cutting costs as much as possible.”

Pol and his partners have not had to pay their workers’ wages, which represent around 40-45% of fixed costs, as all of the workers have been furloughed since March. As a result, 70% of their wages and most of their social security costs have been paid by the government. But the hostel has still had to pay taxes on the income it generated in 2019. And it has continued to pay rent throughout this period, although in the Fall Pol and his partners managed to negotiate a 50% reduction.

“We made the landlord, who owns both properties, an offer he chose not to refuse. We said, ‘if you let us off half of the rent for six months you will be doubling our chances of survival.’ We still have eight years left on our contract and he knows we are good tenants. He also knows that finding someone to replace us at this present juncture is not going to be easy.”

But the savings are running low. Pol says they have should have enough funds to hold out for six more months, as long as the government extends the furlough program for the worst-hit sectors until the summer, as is expected.

“It doesn’t look like we are going to have a normal Spring or Summer. Like many people in this sector, our big hope is that the Mobile World Congress (MWC) goes ahead.”

The world’s biggest mobile trade fair, MWC used to generate around half a billion euros for Barcelona each year, much of which ended up in the pockets of hoteliers. The four-day event normally takes place at the end of February, in the middle of Barcelona’s low tourist season. Last year, however, it was cancelled at the last minute, as the pandemic spread around the world. This year, it is scheduled to take take place at the end of June, in the hope that business travel will begin to pick up in the interim.

“Even if it goes ahead with just a third of the normal number of attendees (110,000), it might give a chance for the city to begin to get back on its feet,” Pol says. “For us, it might mean being able to finally fill four or five of our beds. Right now, that’s about as much as we can hope for.” By Nick Corbishley, for WOLF STREET.

168 comments for ““Keeping a Business Alive that’s Generating No Revenues is an Uphill Struggle”: Friend and Hostel Owner in Barcelona. An Industry Collapses”