Long-term structural issues have long dogged these fuels. Then came the Pandemic.

As of the latest four-week period through January 1, gasoline consumption fell to 7.89 million barrels per day (mb/d), according to EIA data. This was below where it had been over the same period at the end of 1994 (8.04 mb/d). The chart also shows the long-term structural demand issues, where in the 12 years before the Pandemic, gasoline consumption, after a big drop during the Great Recession and then a recovery, had gone nowhere. This dynamic then got whacked by the changes in driving patterns during the Pandemic: 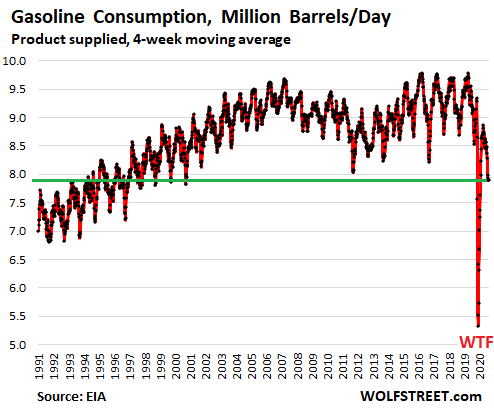 Consumption in the latest four-week period through January 1 was still down 12% from a year ago. Since July, consumption has been down between 8% and 13% year-over-year: 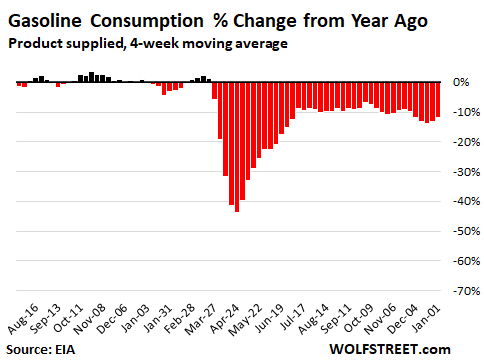 There are several factors entering into the gasoline equation that pull in different directions:

Transit authorities have reported massive declines in the use of buses and trains, as people have switched to driving, which boosted gasoline consumption. But other people are working from home, and nearly 10 million jobs have disappeared since February, which diminished gasoline consumption. Then there’s the whole dynamic of people driving instead of flying to avoid airports and planes, which shifts consumption from jet fuel to gasoline. The boom in ecommerce is sending last-mile delivery vehicles through neighborhoods. And given that consumers have been loading up on goods, including a record pile of durable goods, instead of buying services, there is a sudden boom in trucking.

On net, vehicle miles driven by all types of motor vehicles, from passenger cars to highway trucks, at 259 billion miles in October, according to the latest data available from the Department of Transportation, were still down by 8.8% from a year earlier: 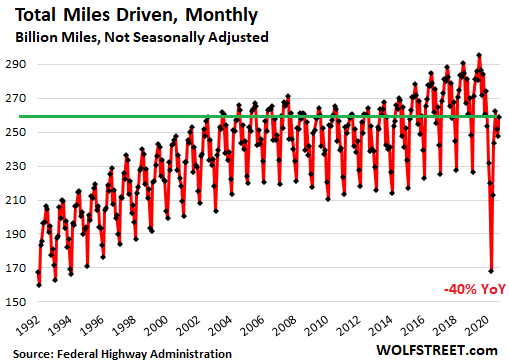 The airlines are struggling to hang on. Ten months into the Pandemic, the four-week moving average of consumption of kerosene-type jet fuel fell to 1.12 mb/d. Before the Pandemic, this would have been the lowest in the data going back to 1991: 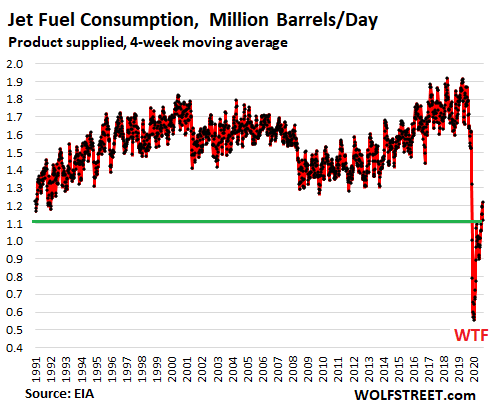 The chart above also shows the prior two big drops: The years following 9/11; and the years following the Financial Crisis. It took 17 years for jet fuel demand to return to the pre-9/11 peaks in 2000 and 2001.

But passenger volume recovered after about three years from 9/11 and after about four years from the Financial Crisis. This long-term hit to jet fuel consumption was in part caused by the greater fuel efficiencies of the new planes that replaced the old planes that had been massively retired during each of those slumps, and those more efficient planes exerted downward pressure on fuel demand, even as traffic was recovering.

This dynamic is also playing out now, with the oldest least fuel-efficient planes being massively sent off to retirement.

Compared to the same period last year, consumption of jet fuel was down by 37.6% during the four-week period over the holidays, another sign that the industry is still in a catastrophic condition: 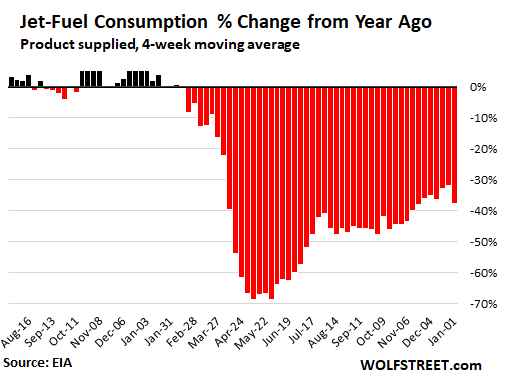 Traffic is down even more than jet fuel consumption. TSA checkpoint screenings of the number of passengers that enter airport security zones every day were down 55.7% year-over-year, based on the seven-day moving average through January 7: 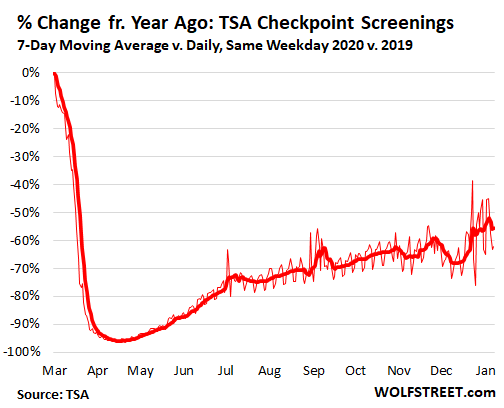 A broad range of fuels fall into this category, including diesel for trucks, locomotives, and all kinds of equipment; and fuel oils for heating and utility-scale power generation. The four-week moving average of consumption has been approximately flat for the past few weeks, at 3.68 mb/d, after sharp declines during the spring and summer, when consumption fell by as much as 20% year-over-year. But peak distillate consumption was in the years before 2008: 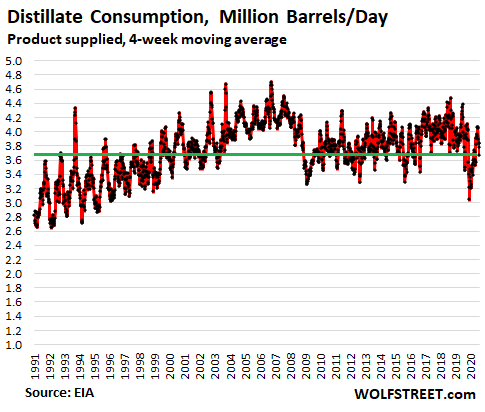 During the four-week period through January 1, consumption of gasoline, jet fuel, and distillate combined, at 12.69 mb/d, was down 12.1% from a year ago, and was back where it had been in 1997, under the dual impact of long-term structural issues and the Pandemic: 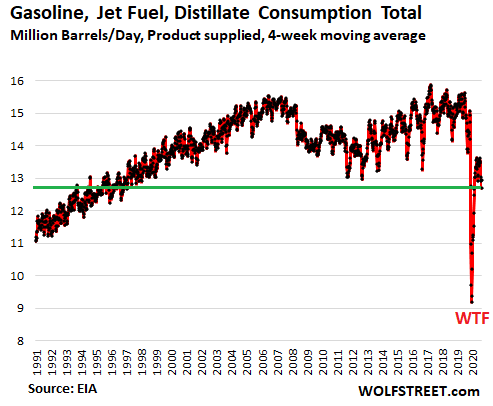 A note on the impact of EVs.

EVs are causing a shift from consumption of gasoline to the consumption of electricity, and thereby in the US away from petroleum since liquid hydrocarbons are little used for power generation in the US, where most of the power is generated by, in that order, natural gas, renewables, coal, and nuclear.

Electric utilities, which have been stuck in a no-growth industry for over a decade, are eagerly awaiting that increase in sales of electricity, which is how they make their money, however gradual it may be. From 2008 through 2019, electricity sales have ticked up just 2.3%, and demand from EVs cannot come soon enough, but utilities will have to be very patient: 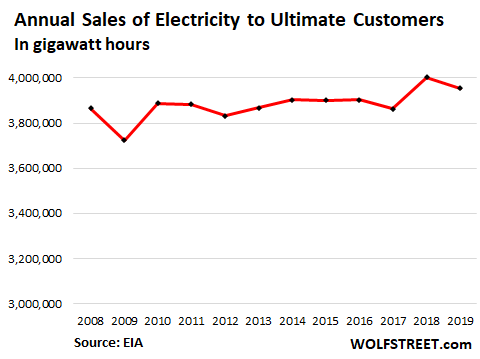 120 comments for “Update on the WTF Collapse of Gasoline & Jet Fuel Consumption: The Holiday Period”