The service sector, including finance & insurance, in the New York Fed’s district, reports rising prices and wages, despite further deterioration in business. Weirdest economy ever.

This is another moment in the Weirdest Economy Ever, driven by stimulus, forbearance, bailouts, record money printing, record government-deficit spending, exuberant financial markets, and record low costs of funding: For companies in the service sector, the service economy still sucks but now more so than in prior months, and these companies are still shedding employees but now faster than in prior months, and yet wages and prices are rising.

“Activity in the region’s service sector declined at an accelerated pace,” said the New York Fed this morning in its January 2021 survey of service sector companies in its district. The headline Current Business Activity index dropped five points to -31.8, the worst assessment of the service sector since June, which has now been on the decline for the 11th month in a row; and the decline has steepened over the past three months. Values above the blue line (zero) indicate improvement, values below the blue line indicate deterioration in this diffusion index (historic data via YCharts, current data via NY Fed): 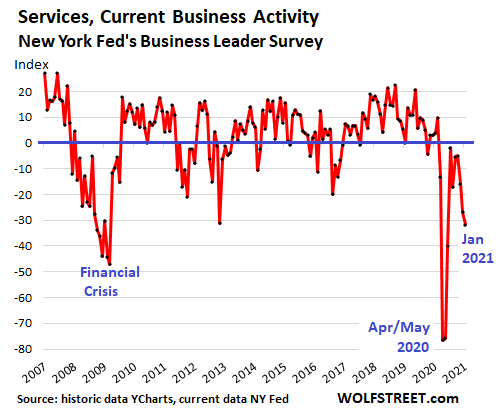 The New York Fed’s district includes New York State, Northern New Jersey, and Fairfield County, Connecticut. This is where the finance & insurance sector is concentrated, among many other services. Services in general account for nearly 70% of the overall US economy.

The New York Fed sends the survey on the first business day of every months to the same pool of 150 top executives of services companies in its district, who respond based on their own company’s data. The names of the companies and executives are not released.

The business climate index has been abysmal since March. It’s based on the question, “How would you rate the current business climate for this time of year?” The index had dropped to -93 and -94 in April and May, the worst in the data going back to 2004, with nearly all executives reporting at the time that the business climate had worsened.

After getting less bad, so to speak, from July through December, but remaining at abysmal levels, the business climate in January worsened again, with the index dropping to -63.3. Of the executives, 12.2% said the business climate was better than normal, and 75.6% said it was worse than normal (historic data via YCharts, current data via NY Fed) : 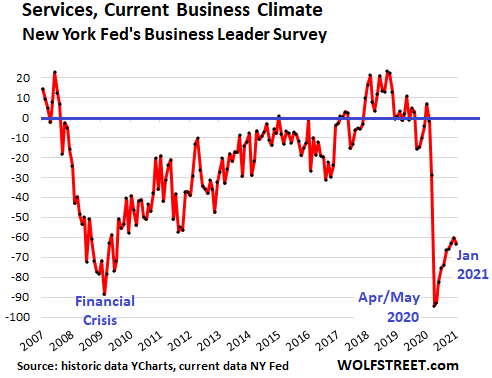 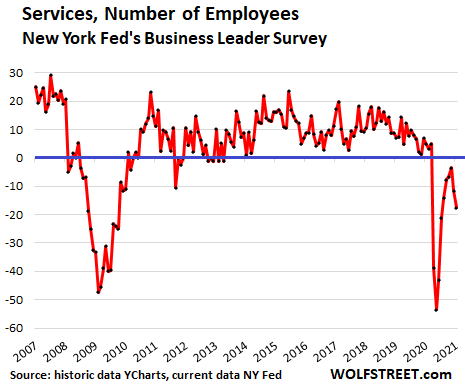 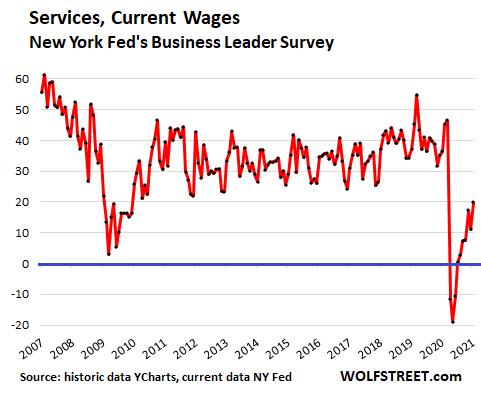 And input prices rose. The index for prices paid in the service sector in the New York District never actually declined during the Pandemic, though price increases came to a near-halt in April. Since then, price increases have picked up momentum. In January, the index rose to 38.9, indicating the fastest price increases since February 2020, with 42.5% of the companies saying they paid higher prices than the month before, and just 3.6% saying they paid lower prices: 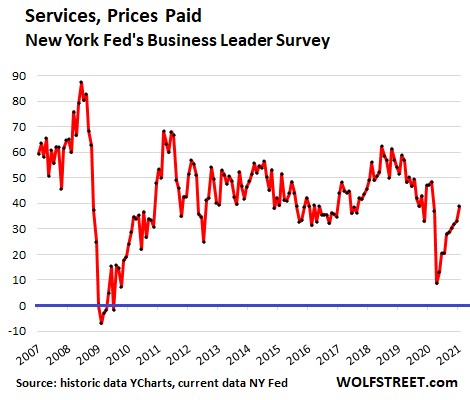 And selling prices rose 8 points to 7.4, “the first sign of any significant selling price increases since the pandemic began,” the New York Fed said triumphantly, because inflation is what the Fed wants more than anything: 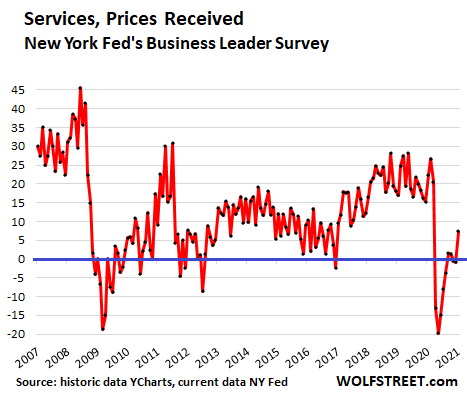 So the weirdest economy ever. The massive service sector in the overall US economy is of course what hasn’t fully recovered yet. The stimulus money sent to consumers drove spending on goods to historic highs, many of which are imported, with spending on durable goods spiking from record to record. But consumer spending on services continues to lag, and in November dropped again, and was down nearly 5% from a year earlier: 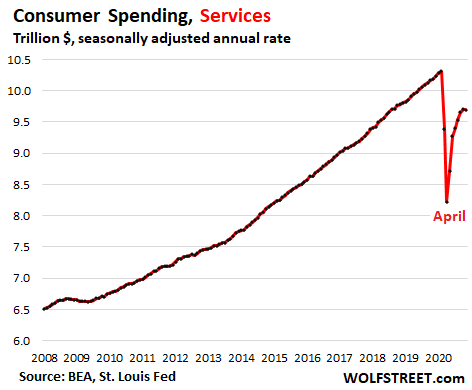 130 comments for “To Put it Succinctly about Services: Everything Drops, incl. Jobs, but Prices & Wages Rise”