Retail sales in December fell for the third month in a row, on a “seasonally adjusted” basis, down 0.7% from November, to $541 billion, and down 2.1% from the peak in September, according to the Census Bureau this morning. And even without restaurants and bars – many of which were shut down in December – retail sales fell on a seasonally adjusted basis for the third months in a row.

For the whole year 2020, retail sales inched up 0.6% to $6.26 trillion, not seasonally adjusted, after the historic collapse in March and April, and the historic surge in the following months, fueled by stimulus and extra unemployment benefits and by the Pandemic-induced switch from services which are not included in “retail” sales – such as airline tickets, movie tickets, hotel bookings, and haircuts – to goods, such as cars, appliances, and laptops. 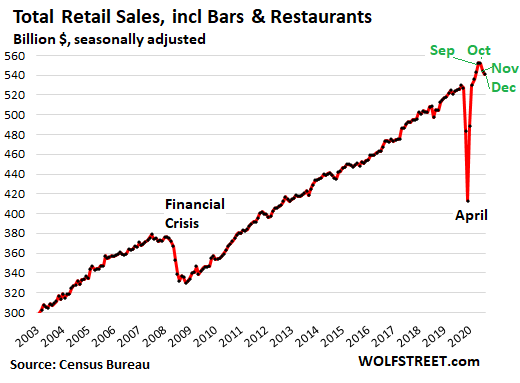 Have the massive shifts during the Pandemic messed with seasonality?

But the Pandemic has shifted many things around, preventing people from going on vacation, keeping people at home, causing people to buy things they wouldn’t normally have bought, and thereby causing the normal seasonal patterns to change. And the seasonal adjustments that would normally smoothen out these seasonal patterns may have gone awry – particularly for online sales – and we’re going to take a look at the guts of it…

“Not seasonally adjusted” retail sales in December, at $620 billion, were up 4.8% from December last year. This was strong, a full percentage point more than the average 3.8% year-over-year increase for Decembers going back to 2011. 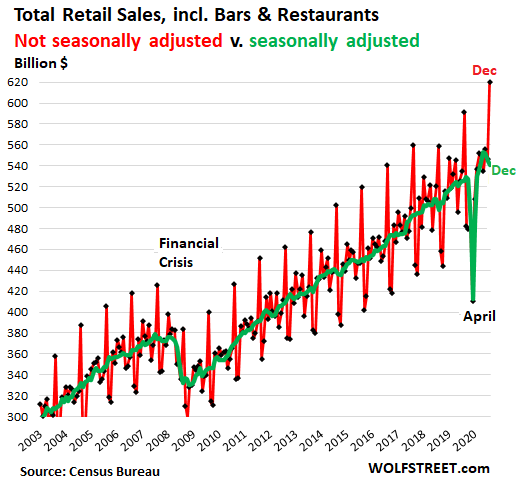 Sales at ecommerce sites and other “non-store retailers” (mail-order operations, stalls, vending machines, etc.) in December, seasonally adjusted fell 5.8% from November, to $81 billion. That triggered my curiosity because the data on ecommerce sales, released by private companies, had pointed at a huge increase for ecommerce sales. 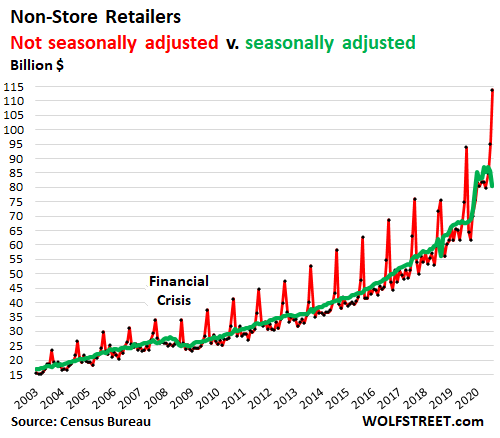 I put this out there for the policy makers that are now busy crafting the next wave of free money to enable Americans to buy more goods from China, Mexico, Germany, and other countries to stimulate those economies: Look beyond the huge seasonal adjustments of retail sales!

To avoid permanent vertigo, we revert to seasonally adjusted sales.

Sales at new & used auto dealers and parts stores rose 1.9% in December from November to a record $115 billion (seasonally adjusted) and were up 9.9% from December last year. They accounted for 21% of total retail sales. For the entire year 2020, despite the plunge in March and April, sales still eked out a 1.1% gain, to $1.25 trillion.

But the number of new and used vehicles sold fell sharply in the year 2020. What happened was a historic price spike in used vehicles; and in new vehicles, a combination of factors that caused the average transaction price to soar 9% year-over-year, to $38,077 by December. Fewer vehicles, but more expensive vehicles – and voilà, sales in dollars are up. These retail sales are not adjusted for inflation: 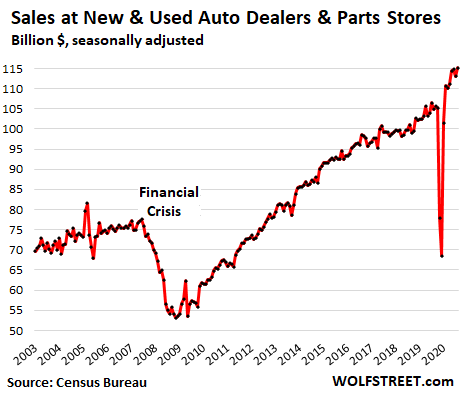 Sales at Food and Beverage Stores fell by 1.4% in December from November to $70 billion (seasonally adjusted) but were up 8.9% from a year ago, as consumption switched to the home from restaurants, cafés, cafeterias, office vending machines, and office supply closets. For the entire year, sales jumped by 11.5% to $853 billion: 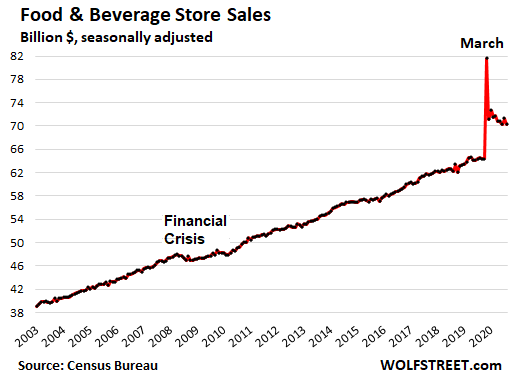 Sales at Restaurants & Bars fell 4.5% in December from November, as new restrictions due to surging virus infections were put in place. At $51 billion (seasonally adjusted), sales were down 21% year-over-year: 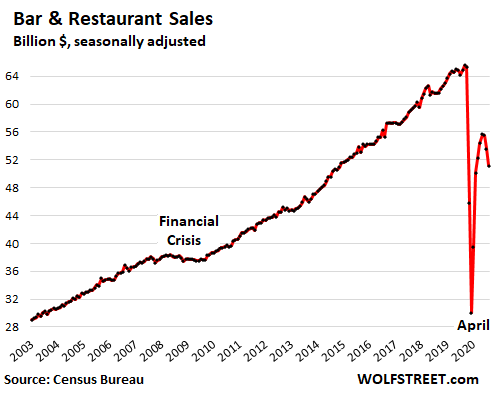 Sales at general merchandise stores (minus department stores) fell 0.7% in December from November, to $52 billion, but were up 6.5% from a year ago. Stores in this category include the brick-and-mortar stores of Walmart, Costco, and Target, but not their ecommerce sales (which are picked up by the ecommerce category): 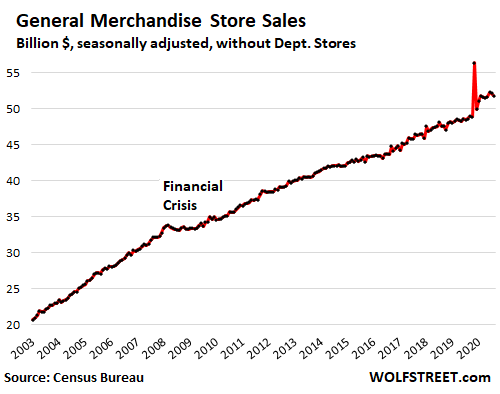 Sales at department stores dropped 3.8% in December from November, after having dropped 7.7% in November from October, to just $8.6 billion (seasonally adjusted), having plunged 21% year-over-year. For the year 2020, department store sales have plunged 18% to $111 billion, by far the lowest in the data going back to 1992, despite 28 years of population growth and inflation.

This iconic American way of shopping is moribund. For mall owners, it’s just a matter of slowing and controlling the disappearance of these stores, as Simon Property Group and Brookfield Property are doing with their purchase of J.C. Penney out of bankruptcy.

Sales at clothing and accessory stores rose 2.4% in December from November, to $19 billion (seasonally adjusted), but were down 16% year-over-year. For the year 2020, sales collapsed by 26% to $196 billion, as previously reluctant folks have figured out how to buy clothes online. Others already figured this out long ago. Hence peak sales in 2018 and current sales at 2007 levels: 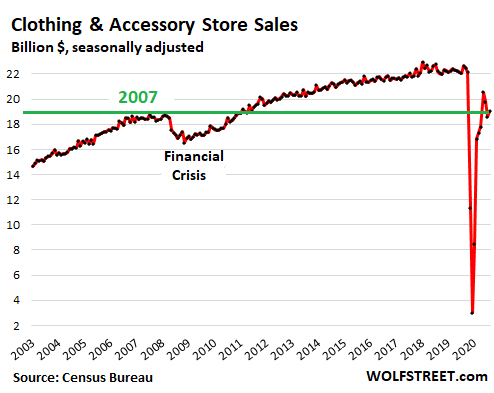 Sales at building materials, garden supply and equipment stores ticked up 0.9% in December from November, to a new record of $38.4 billion, and were up 17% year-over-year, among the big Pandemic winners, as Americans were sprucing up their homes, now that they’re spending a whole lot more time  there for their staycations, work from home, study from home, and eat at home. For the year 2020, sales jumped by 14% to $438 billion: 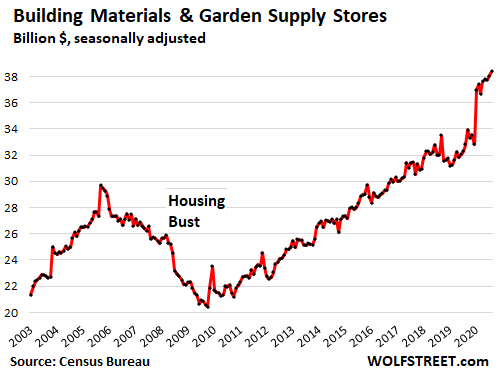 Sales at gas stations jumped 6.6% in December from November to $38 billion, but were still down 12% year-over-year. These sales include everything a gas station sells, not only fuels but also snacks, sodas, motor oil, and the like. Fuel sales are a function of volume and of the highly volatile price of fuel; and by the end of December, the average price of gasoline, according to EIA data, had jumped 6.7% from a month earlier: 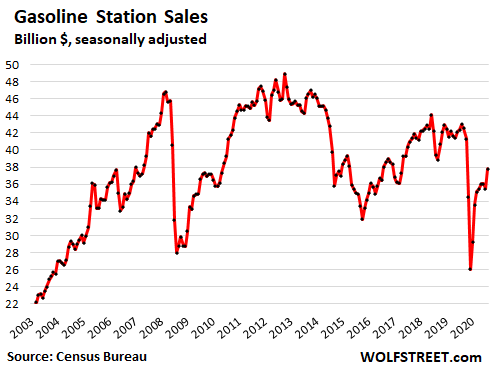 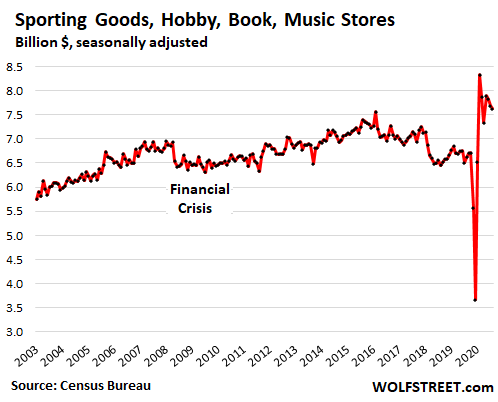 As amazing as it might seem, even furniture sales have wandered off to the Internet, and Wayfair, an online furniture retailer, has become the 8th largest ecommerce retailer in the US, according to eMarketer; but its sales are not included here: 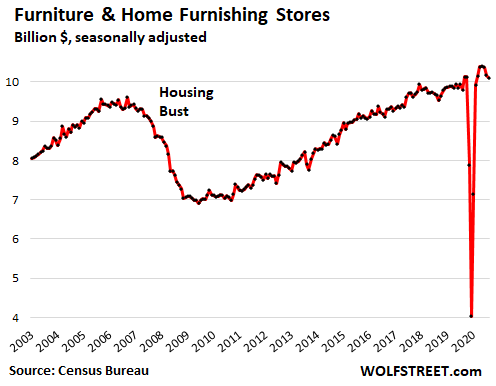 Sales at Electronics and appliance stores fell 4.9% in December from November, to $6.7 billion (seasonally adjusted), and were down 17% year-over-year. For the whole year 2020, sales plunged 14.6% to $83 billion, which is ironic because Americans bought more electronics than ever, from laptops for their kids to network equipment for the work-from-home parent, but they bought it online.

This is another moribund brick-and-mortar category. Best Buy’s brick and mortar stores are in this category, and those stores are dying, and are now essentially being relegated to pick-up locations. But Best Buy got the memo years ago and has become the sixth largest ecommerce retailer. And Apple stores are in this category, but Apple’s booming online sales made it the 4th largest ecommerce retailer in the US. That’s the direction where this is going, and mall owners need to figure out what to do with that land: 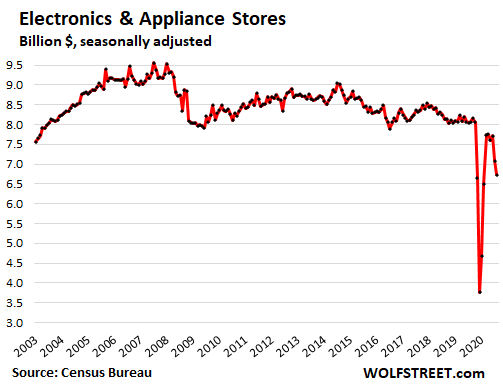