There is a “housing shortage” and an “inventory shortage” until there suddenly isn’t.

In San Francisco, the erstwhile housing “shortage” and inventory “shortage,” hyped to the nth degree by the industry, has now turned into a historic inventory glut.

There were 2,370 homes listed for sale in San Francisco in the week ended September 27, up 73% from the same week a year ago, according to data from Redfin. About two-thirds of them were condos. The chart shows the comparisons of 2020 to the prior three years. Note the seasonal bulge of active listings after Labor Day in prior years, and how 2020 completely blew that away: 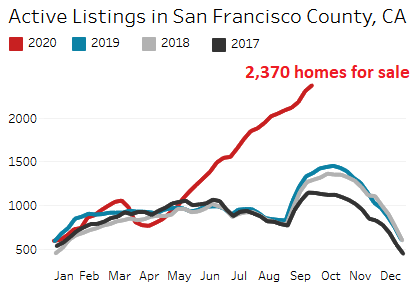 This inventory “shortage” turned into a glut when condo owners who don’t live in these units – a lot of condos are investment properties – decided they need to sell because the Airbnb business has swooned, or because rents in San Francisco are in a historic free fall amid surging vacancy rates as younger recent arrivals and some other folks are leaving the city, and the rent that a condo owner could get from the now vacant unit wouldn’t be nearly enough to pay for the mortgage, homeowner association fees, property taxes, and insurance. And now condo prices are falling, and owners are trying to unload their units while they still can.

There were a record 1,510 active and “coming soon” condo listings at the end of September, according to MLS data cited by Compass. Zillow lists 1,417 condos for sale at the moment. San Francisco is not a big city. It had a population of about 880,000 in July last year, before the exodus began.

And this does not include the condos for sale by condo developers that have their own sales offices and don’t list their condos on the MLS. These new construction condos for sale are hard to quantify, but the new towers and mid-rise buildings from the construction boom are easy to see.

Many of the condos are used as investment properties, including for long-term rentals. Alas, Zillow now lists 3,785 apartments for rent in the City, including condos for rent, over triple the number it listed for rent during the good old times at the end of September 2016. 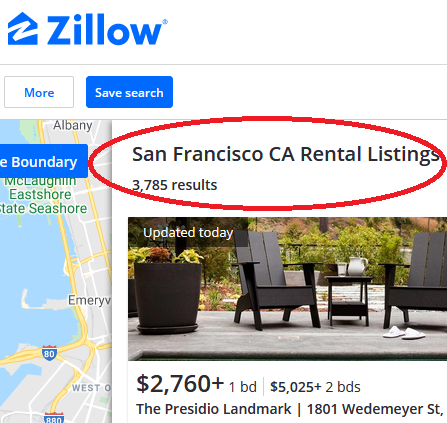 This glut of rentals, plunging rents, and the downturn in the Airbnb business in San Francisco – foreign tourists have largely vanished – have upended the business model of condos as an income-producing investment.

Condos, especially in high rises, are expensive to carry due to the homeowner association fees, taxes, and insurance.

For example, a 2-bedroom, 2-bath condo, originally listed on Zillow at $1.288 million in October a year ago, removed several times and relisted at lower prices, is now listed at $1.1 million – below the median condo sale price in Q3 of $1.25 million. The monthly costs add up: HOA fees $915/month; property taxes $614/month; insurance $385/month. Including the mortgage, total monthly carrying costs amount to $5,768, according to Zillow estimates.

It was listed for rent a couple of years ago at $4,695 a month. But even that insufficient rent might not currently be feasible after the median asking rent for a 2-BR apartment plunged by 20% from a year ago and by 25% from the peak. And then there are the incentives to fill the unit such as the latest craze, “three months free rent.” Nice but not spectacular view — if there’s a Bay view, they’d show it: 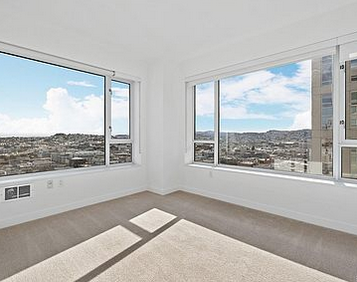 And condo prices have started to drop ever so gently:

Price movements in real estate are slow and take a long time to play out. During Housing Bust 1, from condo peak to condo trough took over five years. The chart of the Case-Shiller Index for condos shows that condo prices have in effect gone nowhere for the past three years, similar to period between mid-2005 and mid-2007: 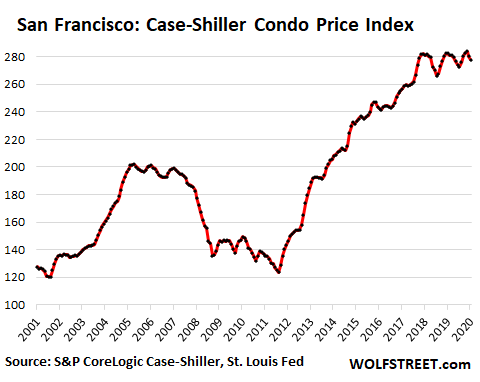 “Within the condo market, the high-rise segment appears to be the weakest, almost certainly due to pandemic-related reasons,” explains Compass in its analysis of the mess.

Sales are taking place at a brisk pace but are far outstripped by the increasing condo glut. Supply of condos listed for sale on the MLS skyrocketed to nearly 8 months, exceeding the supply during Housing Bust 1. Add to that the new construction condos put on the market directly by the developers through their own sales offices and not listed on the MLS.

The supply of houses for sale also jumped, to 4.4 months, approaching the record levels of Housing Bust 1. (chart via Compass): 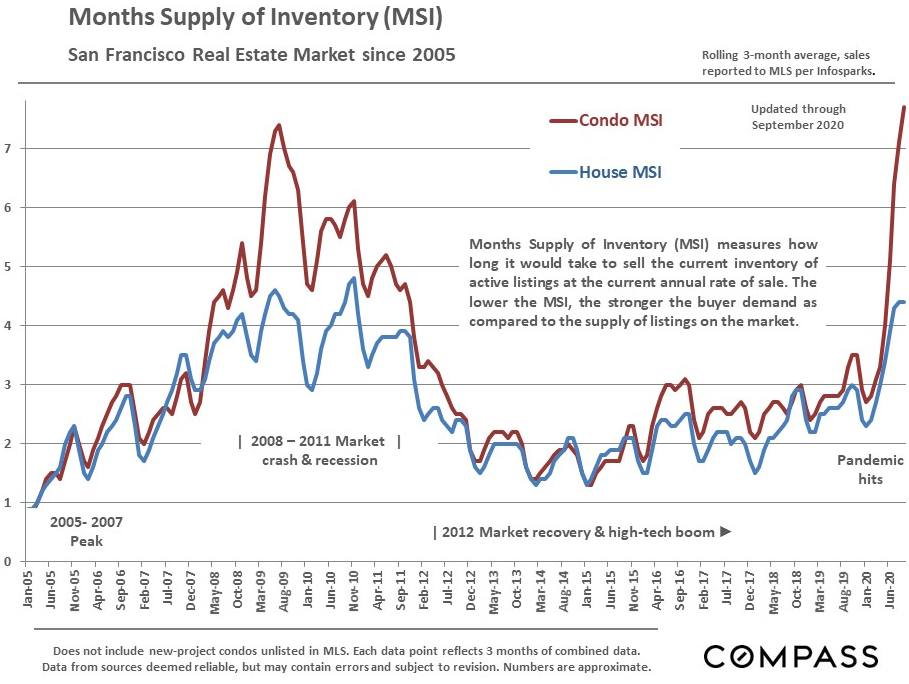 “The number of price reductions – again heavily concentrated in the condo market – has jumped to its highest point in many years,” Compass says. “In certain segments, sellers are now competing for buyers, instead of buyers competing for listings.”

And this condo situation is another indicator that the direction has turned once again in the infamous and relentless boom-and-bust cycles of San Francisco.