What does it mean when Wall Street mega-landlords that bought the impaired assets after the last crash are trying to unload during the worst economic crisis on record?

With Spain in the grip of its deepest recession on record, house prices have begun to fall for the first time since 2015 on a year-over-year basis. In a bid to buck this trend, Aliseda and Anticipa, two real-estate firms that private-equity giant Blackstone acquired in 2017 from Banco Santander, have pledged to reimburse investors up to one tenth of the sale price if the value of the properties they buy drops by more than a tenth in the three months after a deal is sealed.

Many of the 8,400 properties on offer have been sitting on the market since 2018, without finding a buyer. The total portfolio is valued at €1.04 billion. Now, Blackstone is trying everything it can to offload the properties, including offering investors the sweetener of a little extra security.

Blackstone is the biggest private landlord in Spain, with some 100,000 real estate assets in the country, including a huge portfolio of impaired assets, such as defaulted mortgages and the homes that back them, and real estate-owned assets (REOs), that are controlled via dozens of companies. It is heavily exposed to any downturn and has an obvious interest in keeping Spain’s ultra-fragile housing recovery going. That could be why it’s offering such enticing inducements to attract buyers.

“We detected the current context was generating uncertainty for buyers, and wanted to provide them with security and send a message of confidence in the Spanish real estate market,” said Aliseda communications director Jaime Navarro.

The initiative could be a sly marketing ruse, says Spanish financial daily El Confidencial. Aliseda already reduced its offer prices before the Covid-19 outbreak, after surmising at the beginning of this year that Spain’s roughly five-year housing boom was running out of steam. After the lockdown, it undertook another price review and reductions, to where its asking prices could be reasonably well adjusted to the new reality.

But the offer could also send the opposite of its intended message, giving investors the impression that some of the biggest sellers are so worried about the prospect of cascading prices in a market that was already running out of steam before Covid arrived that they’re willing to do just about anything to attract prospective buyers. And that might be enough to convince those prospective buyers to sit on their hands a little while longer, putting further downward pressure on prices.

Eduard Mendiluce, chief executive of Aliseda and Anticipa, insists that the prices of the properties are “highly competitive and that now is a good time to buy a home.”

Spain has so far suffered the biggest post-Covid economic contraction of any EU Member State, including Italy, Greece and Portugal. It has also seen the sharpest rise in unemployment.

Memories are still fresh of the last housing crisis, which was triggered by the collapse of a ten-year housing bubble, during which prices almost tripled, and culminated in a seven-and-a-half year long housing bust. Since then, in many places, prices have not come close to recovering their former boom-era levels. And now, the lukewarm recovery that began in 2015 may be in the process of unraveling.

In the third quarter of this year, as the number of housing sales languished far below 2019 levels, particularly in prime markets such as Madrid and Catalonia, Spain’s national median price suffered its first year-over-year fall, of 0.4%, since 2015, according to real estate appraiser Tinsa’s house price index. Prices fell year-over-year in all but three of Spain’s 18 autonomous communities, those three being the Balearic Islands, the Canary Islands, and Asturias.

The worst-hit regions were La Rioja and Extremadura, where prices slumped 6.6% and 6% respectively. In the two largest markets, Madrid and Barcelona, prices fell 3.6% and 4.7% respectively, and are still down 28% and 27% from their boom-time peaks (prices in thousand euros per square meter, chart via Tinsa): 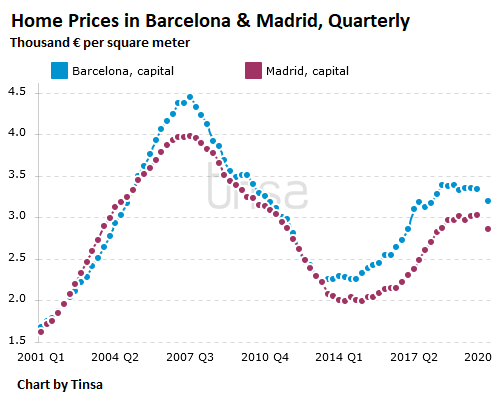 Median home prices in Spain as a whole have only recovered 13.7% from the trough in 2015. In some places, prices have barely recovered at all. In La Rioja they rebounded just 13% since 2015 and are still down a whopping 52% from their boom-time peak. In Galicia, prices began falling last year and are down 1.7% over the past five years. In two other regions, Castilla y Leon and Extramadura, prices are lower than they were in 2015, having fallen 1.3% and 3.7% respectively.

Private equity giants like Blackstone bought many of these assets at huge discounts in the wake of the last crisis, since they were the only large market participants with enough funds on hand to buy vast packages of foreclosed homes and failed property schemes. Blackstone has also become a huge player in Spain’s rental market, and has profited from the surging rents over those years. But conditions have changed. Since the lockdown, apartments, some possibly used as Airbnb units during the tourist boom, have flooded the rental market, and have pushed rents lower in many of the hottest markets, including Barcelona, Madrid and Malaga. By Nick Corbishley, for WOLF STREET.

As if that wasn’t enough, owners of empty apartments also face the ever present risk that the apartments could be occupied by squatters. For many, squatting is a desperate last resort. For others, it’s a lifestyle choice or political statement. Barcelona, ground zero of the phenomenon, attracts squatters from all over Europe. Read… How Spain Became a Squatter’s Paradise