Work-from-anywhere, unemployment, the land rush for houses, virus-fears about elevators, the oil bust: Big shifts for the fifth month in a row.

In some other markets, rents are skyrocketing. So here we go with our roller-coaster ride through the cities.

The median asking rent for one-bedroom apartments in San Francisco plunged by 6.9% in September from August, after having plunged by 5.0% in August from July, to $2,830. This brings the five-month decline since April to 19%, and the 12-month decline to 20%, according to data from Zumper’s Rent Report. From the peak in June 2019 – which had eked past by a hair the prior high of October 2015 – the median asking rent for 1-BR apartments has plunged 24%!

To convert this plunge from percentages into fiat, so to speak, the median asking rent for a 2-BR apartment has plunged by $950 from September a year ago, and by $1,200 from the peak in October 2015. This is no longer a rounding error.

These median asking rents do not include concessions, such as “one month free” or “two months free” or “free parking for a year” and the like. These concessions have the effect of drastically lowering the rent further. “Two-months free” lowers the rent over the 14-month period by 16%. Concessions, instead of rent cuts, allow landlords to show the monthly rents, as they’re spelled out in the lease, without the concessions, to their now very nervous banks.

“Free upgrades” is what the people who have decided to stay in San Francisco are now looking for. This is the strategy of shopping around among the soaring vacancies for an apartment with the same rent or even lower rent, but of much higher quality and in a better location. It creates churn. Landlords that lost a tenant to a “free upgrade” now have to price their vacant unit competitively, meaning undercutting other offers. This churn and the high vacancies explain the rapid reaction of the market to the current situation. The City of Boom and Bust always. And now is the bust.

Similar to San Francisco, New York City is losing part of its work-from-anywhere crowd that would rather work from a nicer bigger cheaper place further away, or even from a house they’d just bought in the suburbs, leading to surging vacancies, aggressive pricing, and lots of concessions.

The table below shows the 17 most expensive major rental markets by median asking rents, based on Zumper’s data. The more expensive, the bigger the drops. The table shows September rent and the year-over-year percentage. In the shaded area, it shows peak rent and change from peak. Interestingly, Chicago and Honolulu, whose rental markets have gotten crushed over the past few years, appear to have hit bottom: 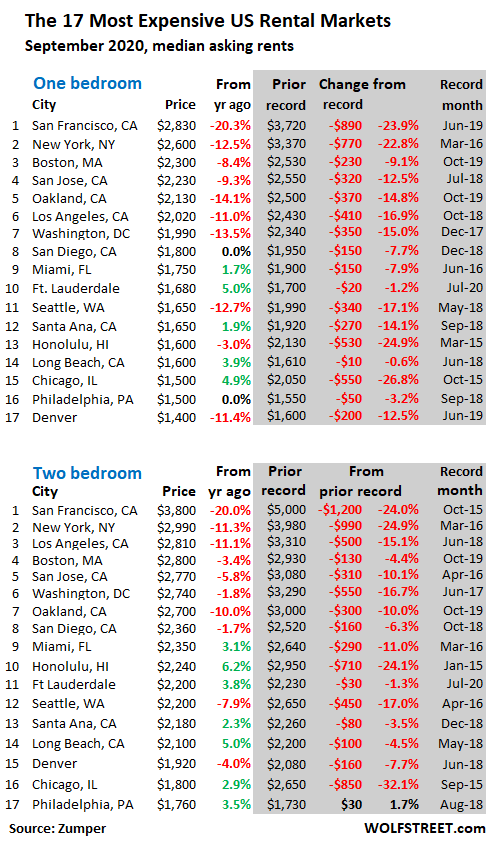 “Median” means half of the asking rents are higher, and half are lower. “Asking rent” is the advertised rent, a measure of the current market, like a price tag in a store. Asking rent does not measure what tenants are currently paying in rent, such as under rent control. Asking rents do not include concessions.

Zumper collects this data from the Multiple Listings Service (MLS) and other listings in the 100 largest markets, but only for apartment buildings, including new construction. They do not include single-family houses and condos-for-rent.

You can work from anywhere and want to save on rent? OK, this list is for you. The cheapest city to rent in among the largest 100 rental markets is Akron, OH. Wichita and Tulsa are second and third cheapest; in all three cities, rents declined. But the list also includes some cities with large rent increases:

The 35 Cities with year-over-year declines in 1-BR rents.

Of the 100 cities, 35 had year-over-year declines in median asking rents for 1-BR apartments. San Francisco leads with a 20% plunge, followed by college town Syracuse, NY, with a 14.4% drop. In addition to the outrageously expensive rental markets discussed above, the list also contains six cities in Texas, and cities across the US, but with moderate declines, such as Tulsa and Wichita, that have not participated in the craziness of other rental markets:

The 34 Cities with 5%-plus year-over-year increases in 1-BR rents.

For five months, we have seen this move now, and it has been sustained so far, of renters getting out of the most expensive cities, and fewer students are moving back to college towns, and the oil patch is struggling with a double-whammy. Some renters head to cheaper rental markets, others bought a home outside the city center somewhere, and others moved back with mom and dad, leaving behind a vacuum. And landlords who want to fill their vacancies respond quickly to market conditions, by dropping their asking rents.

But the corollary is that this move and likely other factors have sent rents surging in numerous other markets.

The table below shows the top 100 cities, 1-BR and 2-BR median asking rents in September, and year-over-year changes, in order of 1-BR rents, from most expensive to least expensive. You can search the list via the search function in your browser (if your smartphone clips this 6-column table on the right, hold your device in landscape position):