Demand is drying up in the priciest markets.

On the surface, rents, when averaged out across the US, still rose in October, though way slower than during the landlord’s golden days, with one-bedroom median asking rent up 1.5% year-over-year and two-bedroom rent up 2.5%, according to Zumper’s Rent Report.

But beneath the surface, a sea change is underway. Zumper:

Among the top ten rental markets, we saw declines in both of the most expensive markets, San Francisco and New York, a trend that continued from last month, and half of the twenty priciest saw falling rents, including cities like San Diego, and Miami, and Honolulu. The market for two bedroom apartments seems to be slowing down even faster, as prices fell in nearly 60% of rental markets.

All heck is breaking loose in San Francisco…

But not because the economy has tanked in the most ludicrously expensive rental market in the US, which it has not. Enormous supply is flooding the market, thanks to a historic construction boom not only of apartment towers but also of condo towers, whose investor-owned units, now that selling them has become tough, are appearing on the rental market.

Nearly all of the new supply is high end, and it is pressuring the market from the top down.

The median asking rent – half are lower, half are higher – for a one-bedroom apartment fell 7.9% year-over-year to $3,380, according to Zumper, which analyzes rental data from over 1 million active rental listings in multi-family buildings (it does not include single-family houses on the rental market). For a two-bedroom, asking rent fell 6.6% year-over-year to $4,670. The fourth month in a row of year-over-year declines.

The last time rents declined year-over-year was in April 2010. In October 2015, the median rent for a two-bedroom had soared 11% year-over-year to a famously ludicrous $5,000, according to Zumper. Double-digit rent increases had been common. Hence the local term for this situation: “the San Francisco Housing Crisis,” when teachers cannot afford to rent a median one-bedroom apartment in the city.

Even now, rent of $4,670 a month for a median two-bedroom works out to be about $56,000 a year, nearly the median annual household income in the US. Even in San Francisco, not all that many households can afford those kinds of rents. Hence an affordability problem that is turning into a demand problem.

And the supply keeps surging. 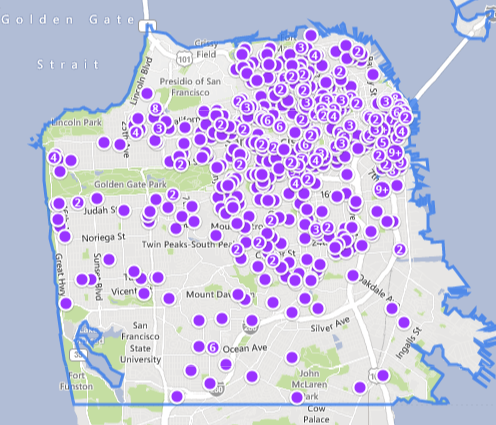 Similar dynamics on a larger scale are playing out in New York.

An onslaught of new supply in form of high-end apartment and condo towers is pressuring everything below. On October 31, Zillow listed 26,199 apartments for rent in the five boroughs of New York City, up 3% from September (25,432 units).

And not just in San Francisco and New York.

Of the 12 most expensive large rental markets in the US, median asking rents fell in seven year-over-year, with San Francisco, New York, and Boston, the three most expensive markets, spilling the most red ink in what used to be a sea of rich green for the past six years: 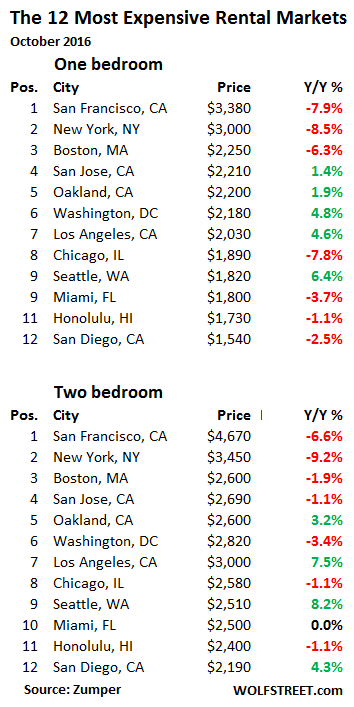 Note in the chart that Seattle and Los Angeles (along with many other cities in the US) have not yet gotten the memo about declining rents. But Chicago is one of the big movers with one-bedroom rents falling 7.8% year-over-year. This comes on top of the suddenly breathless high-end condo market [read… Is Chicago’s Housing Market Next?].

So landlords are piling on the concessions.

With the biggest rental markets taking a beating, landlords are struggling to fill their units, and so rather than slashing asking rents, which would look bad on paper, they offer concessions, usually in form of one or two months of free rent. Apartment data provider Axiometrics puts it this way:

One sign of a moderating apartment market is an increase in lease concessions. And in many markets – especially those experiencing steep declines – owners of lease-up properties are offering potential residents up to two months’ free rent to boost their occupancy.

The chart below by Axiometrics shows the concessions in rental markets across the US (Red = 2+ months free; Orange = 1.5-2 months free; Yellow = 1-1.5 months free; Green = 0.5-1 month free; No dot = renters are out of luck). I circled the Bay Area in white. Note the red dots in Southern California, the thick cluster of red dots along the East Coast, and also in the oil patch, particularly in Houston: 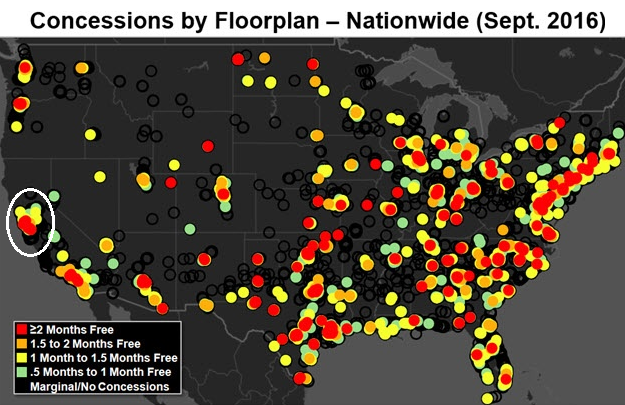 At this rate, none of the razor-thin capitalization rates landlords used a year ago to bamboozle creditors into lending them money make sense anymore. Vacant units make their plight worse. Creditors are getting nervous.

But the renting folk, after having their lifeblood squeezed out of them over the past years, will have the option of moving again a year later, with lots of apartments to choose from – or commence tough negotiations with the landlord – to get a better deal in this new phase of Housing Bubble 2.

Below are the top 100 rental markets, in order of the amount of rent for one-bedroom apartments. Check out your city to see what the trends in October were (tables by Zumper, click to enlarge): 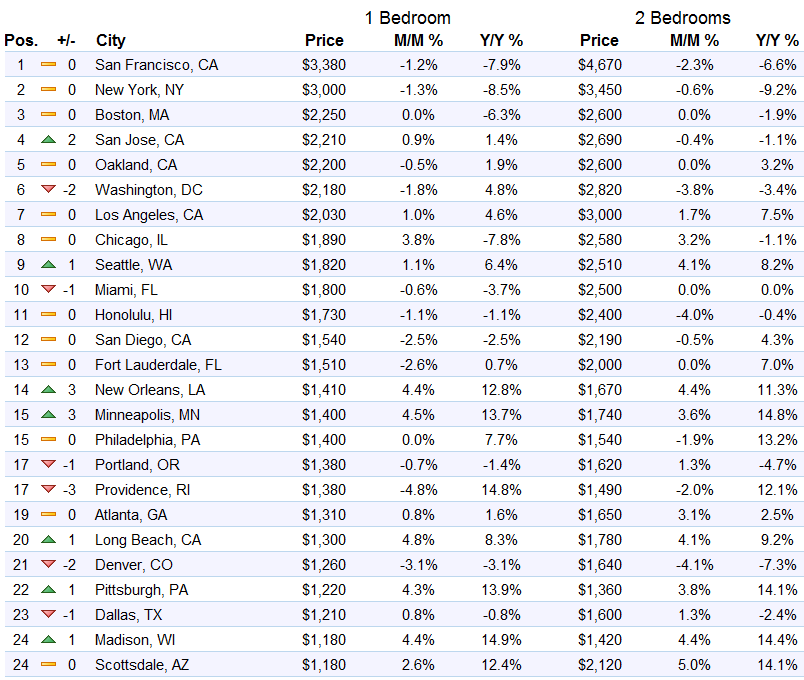 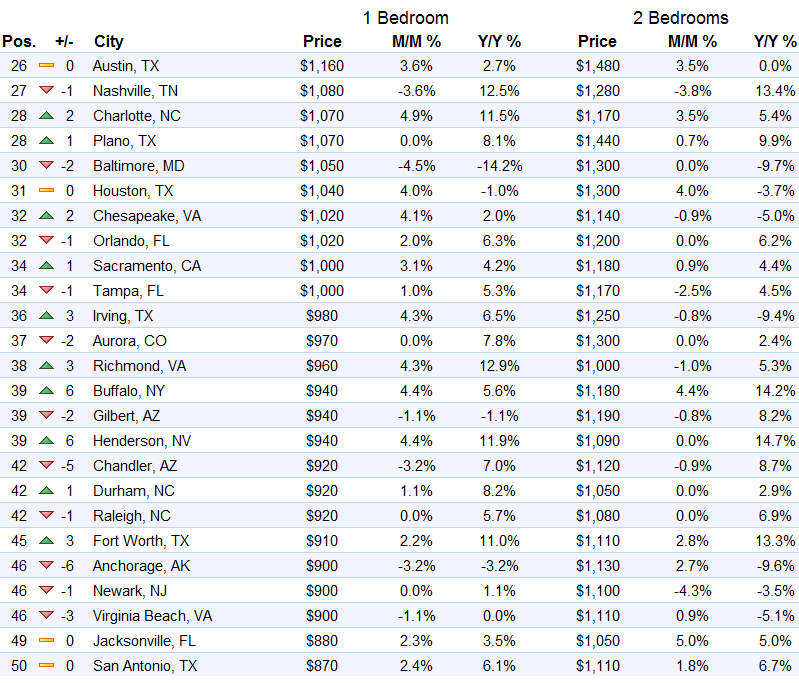 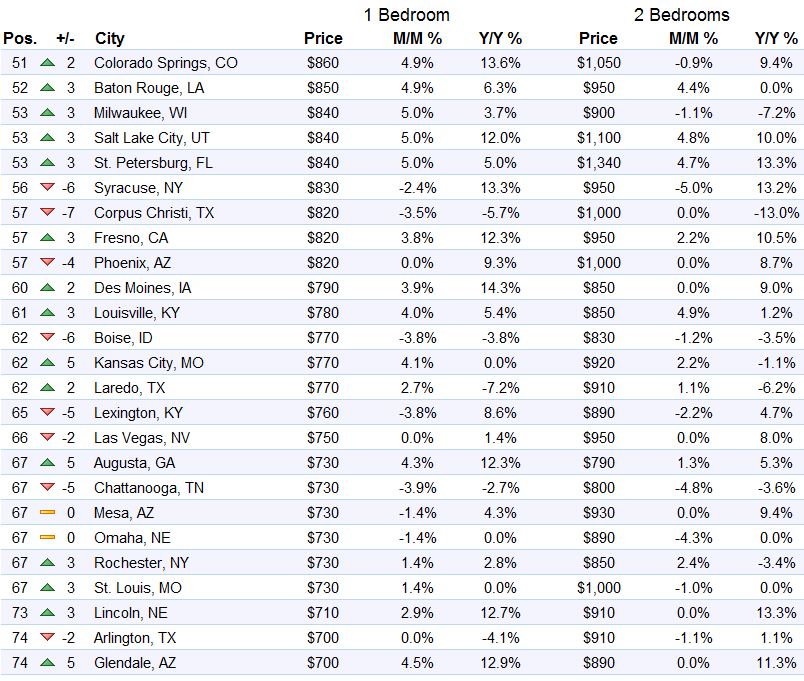 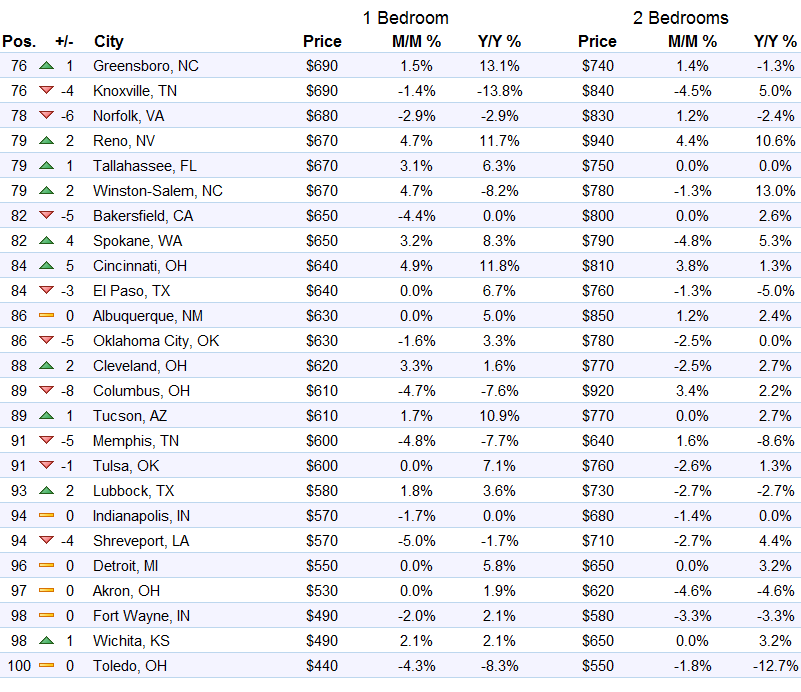 49 comments for “What the Heck is Going on with Rents?”