But seeing the frenzy, the Fed has stepped away.

For the US junk bond market, August was the month of superlatives and records. Companies issued a total of $52.9 billion in high-yield bonds, by far the most ever for any August, which is normally a slow month, and the second highest amount for any month, behind only June, which had set the all-time record at $59.9 billion, according to S&P Global. August issuance was five times the volume of August last year, when there were already worries about the economy, a possible recession, the corporate debt overhang, and a trade war between the US and China: 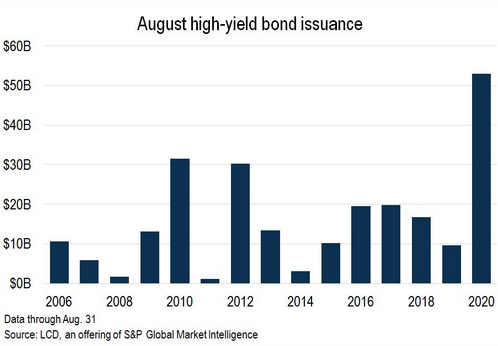 Each of the past four months – May, June, July, and August – set a record in junk bond issuance for that calendar month.

Another type of record was set on August 10, when Ball Corp., an aluminum packaging company that makes things like beverage cans, sold $1.3 billion of 10-year junk bonds at a yield of 2.875%, the lowest-ever yield for a US junk bond with a maturity of five years or longer.

And there was such demand even at this low yield that Ball Corp. upped the $1 billion offering to $1.3 billion.

These bonds were rated BB+, the highest junk-bond category just below investment grade (my cheat sheet for corporate credit ratings), and therefore qualified for being purchased by the Fed’s Special Purpose Vehicle (SPV) for corporate bonds. But as of August 31, the Fed doesn’t hold any Ball Corp. bonds.

Bloomberg opined that this rally in junk bonds was triggered by two factors, “the Federal Reserve’s historic support for the market and heavy inflows into funds that buy the risky debt” – and the latter, the act of chasing yield, was a consequence of the first. It all comes down to the Fed.

Indeed, there has been a huge flow of liquidity into junk bonds, trying to find something with a noticeable yield, and so there was huge demand for new issuance of junk bonds.

So where do you go to find a yield that beats inflation? Investors went chasing after junk bonds, hoping to be front-running the Fed that would buy these instruments by the gazillions, pay an even higher price, and allow everyone to make tons of money the easy way.

Alas, by that time, the Fed had already stopped buying corporate bond ETFs altogether – it had bought its last ETF  (a measly 9,626 shares of Vanguard Intermediate-Term Corporate Bond ETF) on July 23 – and it had cut its corporate bond purchases to near nothing.

Junk bond issuance over the first eight months of 2020 – on the boom in May, June, July, and August – jumped 71% from a year ago to $292 billion, according to S&P Global. Citing projections by BofA Global Research credit strategists, it said that full-year junk-bond issuance is on track to reach $375 billion. And this “would shatter the current record total of $344.8 billion in 2012.”

Since those heady days of early August, when the bond market was still under the illusion that the Fed would buy all these junk bonds, the average BB-rated yield – the high end of the junk-bond spectrum that qualifies for Fed purchases – has ticked up from around 3.80% on August 5 to 4.09% currently (ICE BofA BB US High Yield Index).

In mid-February, just days before all heck broke loose in the markets, the average BB-rated junk-bond yield had dropped to an all-time record low of 3.51%: 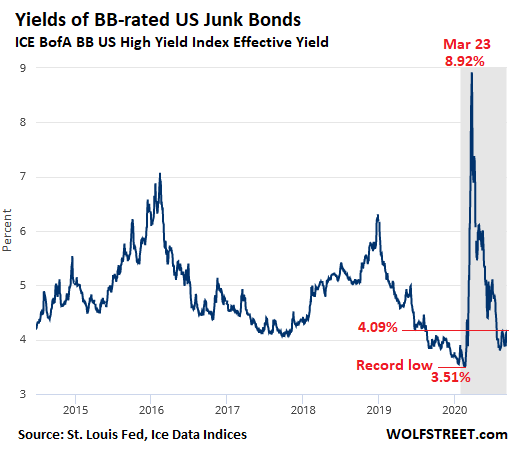 What most issuers did (79% of total issuance in August) with part of the money raised through the bond offering is pay off existing debts, particularly leveraged loans. Leveraged loans are secured by collateral and are higher up in the capital structure than unsecured bonds. In a restructuring or bankruptcy, holders of leverage loans recover a portion of their capital, perhaps 40%, while holders of unsecured bonds may get little or nothing.

Companies that issued unsecured bonds to refinance secured leveraged loans replaced debt that is higher up in the capital structure with debt that is lower in the capital structure, a smart move by the companies because it will leave them room and collateral — when push comes to shove and investors get nervous and balk at buying unsecured debt — to issue secured debt to get out of a jam. And investors, who are now exposed to greater risks at a lower yield, went eagerly along with it.

That’s what Ball Corp did. It issued $1.3 billion in unsecured 10-year notes, used $600 million of the proceeds to pay off a secured leveraged loan, and the rest of the proceeds is for general corporate purposes. This means an increase in debt of $700 million, all at a minuscule cost of capital for a junk-rated company of 2.875%, hallelujah thank you Fed. But wait… that’s why the Fed has stepped away from the frenzy in the bond market.

95 comments for “Junk-Bond Frenzy Set Records in August, as Everyone Tried to Front-Run the Fed”