These 10 stocks, weighing 25% of the total market, are on one heck of a ride, now in the wrong direction. Rest of market has gone nowhere in nearly 3 years despite huge volatility.

The FANGMANTIS struck again. This WOLF STREET index of ten giant tech stocks, accounting for 25.5% of the total stock market capitalization as tracked by the Wilshire 5000, fell 1.1% today, though the broader market eked out a minuscule gain, with the S&P 500 up a hair.

These 10 stocks – Facebook, Apple, NVIDIA, Google parent Alphabet, Microsoft, Amazon, Netflix, Tesla, Intel, and Salesforce.com – are considered “tech” though they’re also into ecommerce, auto manufacturing & auto retailing, social media, film production and distribution, and the like. Their combined market value (outstanding shares times share price) at its high on September 2 was $9.3 trillion. Since then, the FANGMANTIS Index has dropped by 12.9%, or to put real dollars to it, by $1.20 trillion (market cap data via YCharts): 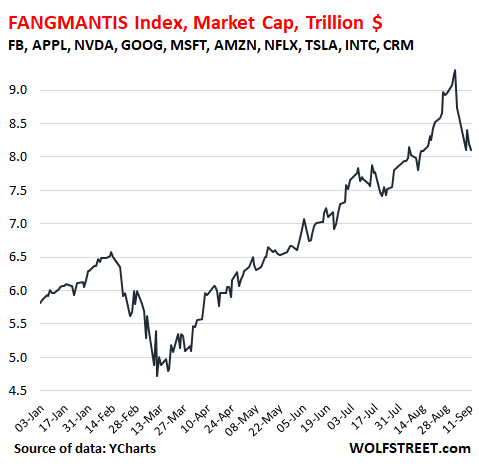 And yet, the FANGMANTIS Index has only fallen back to where it had been about a month ago, unwinding only the 15% gain between August 14 and September 2, that was part of the most astounding blistering blow-off-the-top 24% rally that had started on July 1. And despite the crash in late February and early March, the index is still up about 40% for the year.

While the FANGMANTIS index – I purloined the idea from a WOLF STREET comment by Duane – has dropped 12.9% from its closing high, the individual closing highs of the 10 stocks were spread over a period between August 31 through September 2, and these stocks have dropped between 5.8% (Intel) and 25.1% (Tesla) from their respective highs (date in parentheses):

Alibaba [BABA] is not in the FANGMANTIS because it’s not a common stock; it’s an ADR, issued by a mailbox company in the Cayman Islands that has a contract with an entity of Alibaba in China. Similar story with other big ADRs, such as Taiwan Semiconductor [TSM].

And all the other stocks without the FANGMANTIS?

The FANGMANTIS accounted for 25.5% of the total market, as tracked by the Wilshire 5000, which includes all 3,415 or so stocks listed in the US. So how did the overall market do without the FANGMANTIS?

This is tracked by my handy-dandy “Wilshire 5000 minus FANGMANTIS Index.” It followed a very different track. It has not reached its February 19 high. It is down 5.3% for the year. And it is up only 2.5% from mid-January 2018, essentially having gone nowhere in nearly three years despite the enormous volatility in between. On the other hand, it is down only 3.1% from its post-crash high on August 28 (Wilshire 5000 data via YCharts): 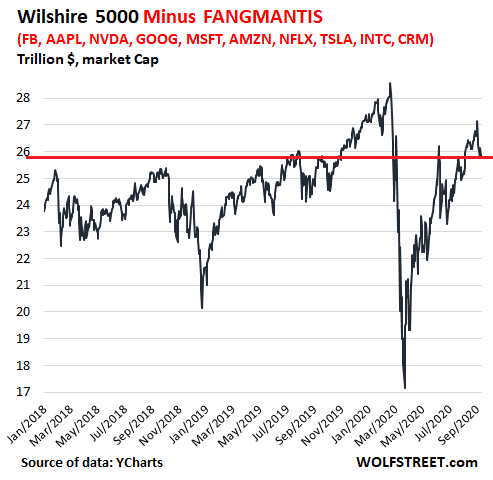 FANGMANTIS v. the rest of the market since February 19, in percentages. 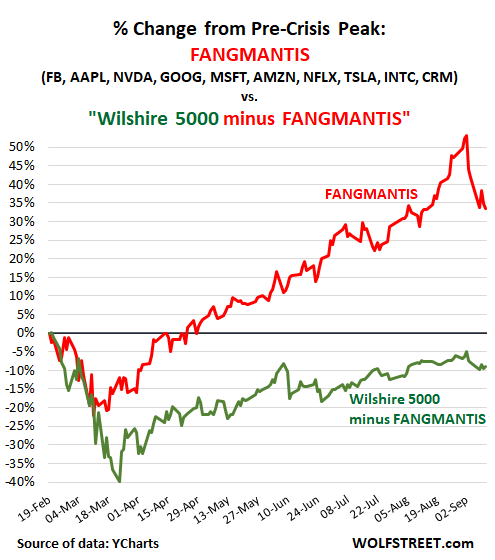 The huge US stock market has become totally dependent on a few mega-ton high-fliers. There are plenty of smaller high-fliers too, with even nuttier percentage gains, but they don’t weigh that much.

And there are some former monsters that have collapsed, such as Exxon Mobil [XOM], down 65% since June 2014 and Chevron [CVX], down 40% since June 2014, along with the entire energy sector, where hundreds of companies have filed for bankruptcy since 2015, with their shares mostly getting cancelled and becoming worthless.

But it seems the entire world has focused on the FANGMANTIS stocks, with retail investors in Europe and Japan and elsewhere, where stock markets are still way down from their peaks many years or decades ago, piling in as the only sure thing that can only go up.

And that calculus worked out with some, let’s say, interruptions in recent years, but it also resulted in completely overblown valuations. The stocks of these companies were already giant in January 2017. But from that moment until the high on September 2, they gained $6.5 trillion in market valuation – nearly half of it since February 19. With trillions being tossed around on a daily basis, it’s easy to lose sight of just how big a trillion is – or $9 trillion for just 10 stocks: 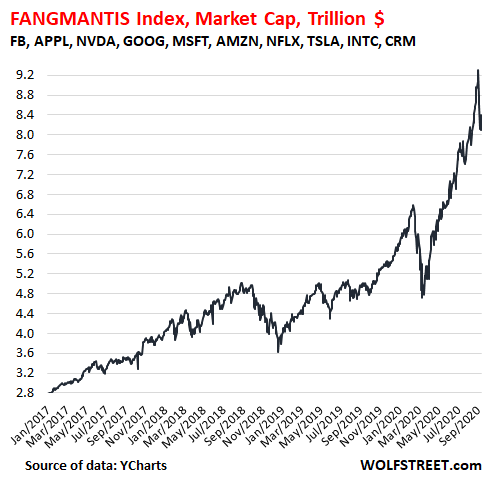 134 comments for “The Wild Ride of the FANGMANTIS Stocks v. Rest of Market”