The Fed stepped away from the market after its jawboning created the biggest bond bubble ever.

So the Fed accomplished its handiwork – creating a bond bubble and bailing out asset holders during the worst economy of in a lifetime – mostly by jawboning, and actually bought very small amounts of bonds and bond ETFs through July. It really just dabbled in them.

But then Tuesday afternoon, the Fed disclosed that over the period of July 31 through August 31:

1. It bought no bond ETFs – and I mean, zero, none, zilch, nada, null. And its spreadsheet was devoid of the usual entries of names, tickers, CUSIP numbers, dates, and mounts. Instead, it said, “No purchases were made over the current reporting period.” The Fed had not bought a single share of anything, not even symbolically. Screenshot of the spreadsheet: 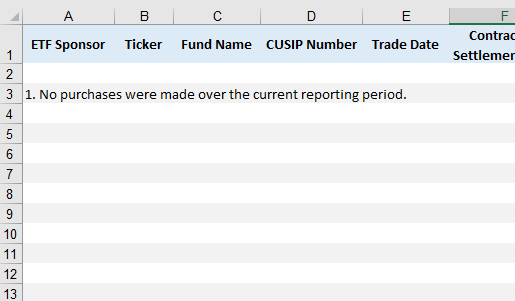 2. Its bond ETF holdings actually fell by $64 million, or by 0.7%, over the period through August 31, to a total of $8.67 billion, as the market value of these ETFs ticked down a smidgen.

This ETF debacle comes after the Fed had only bought $520 million in bond ETFs in July, in a sign that it was already winding down this operation.

3. It bought almost no corporate bonds – and I mean, just a minuscule $456 million with an M, of corporate bonds, which by Fed standards – having tossed out the number $750 billion with a B and measuring its balance sheet in Trillions with a T – is not even a rounding error.

4. Its holdings of corporate bonds ticked up even less because about $21 million of previously purchased bonds matured and were redeemed by the companies, and the total balance of its corporate bond holdings increased over the period by only $435 million, to a total of $3.99 billion.

The Fed’s total corporate bond and bond ETF holdings rose by only $370 million over the period, to $12.66 billion – a far cry from the hoped for $750 billion.

The Fed’s jawboning had done all the heavy lifting. It created enthusiasm for even risky bonds, and the Fed, by just using its “communication tools,” as it likes to say, was able to manipulate the entire bond market into a frenzy.

For example, the junk-rated Ford Motor Co. bonds show how little the Fed bought, inconsequential amounts essentially, but those bonds soared anyway, and the yields plunged, thanks to jawboning.

The Fed holds $15.5 million in bonds issued by Ford Motor Co., spread over two bonds, a two-year note and a five-year note, that Ford issued on April 22, 2020. The Fed accumulated its position in various smallish trades over time. Ford is junk rated because it had enormous problems and huge losses before the Pandemic, and then the Pandemic made everything a whole lot worse.

The Ford five-year 9.0% notes, CUSIP number 345370CW8, traded at a yield of 10.2% shortly after being issued on April 22. Then, amid announcements and hope-mongering about the Fed’s entry into the corporate bond market, the price began to surge and the yield began to drop. 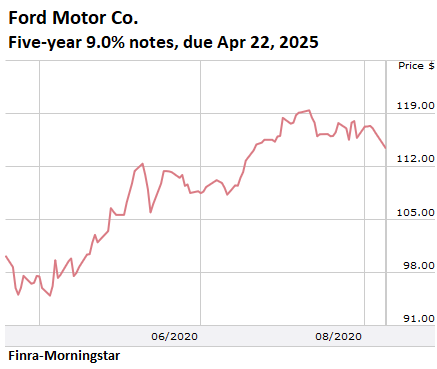 This shows how powerful the Fed’s tool of jawboning is. And it also shows that the Fed doesn’t think it’s necessary to drive the credit market bubble any further. Fed Chair Jerome Powell has explained this many times – that the Fed has succeeded in achieving its objective of creating loose credit market conditions. It has in fact succeeded in blowing this bubble in the shortest amount of time, and the Fed itself is perhaps stunned by the magnitude of the bubble and its own success. And it stopped buying ETFs in July, and it trimmed it corporate-bond purchases to near nothing.