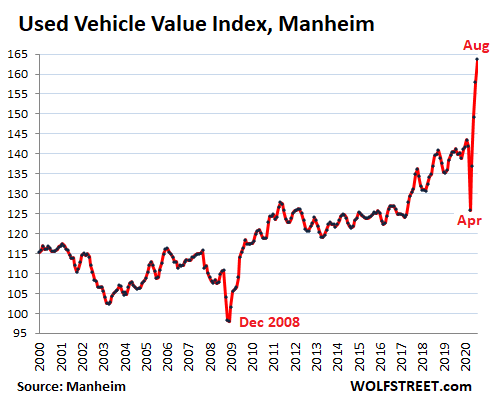 But in late August, prices started backtracking, according to Manheim, the largest auto auction house in the US and a unit of Cox Automotive. For example, after having increased at a “decelerating pace” in the first four weeks of August (+1.6%), the Three-Year-Old Index fell 0.1% in the last full week of August, “ending the streak of 16 weeks of price appreciation.”

J.D. Power, a market research company focused on the auto industry, also noted a deterioration in prices, but starting in the second half of August, under plunging volume at wholesale auctions.

In the weeks before the Pandemic, weekly wholesale volume at auctions around the US of vehicles up to eight years old ranged from 109,000 to 115,000 vehicles a week. During the worst week in April, as the market froze up, volume collapsed to just 18,000 units. Then volume took off again and fully recovered by June, but then started declining again. Earlier in August, auction volume was down to 95,000 units a week.

But in the week ended August 30, auction sales of vehicles up to eight years old plunged 23% from the prior week, to 73,000, J.D. Power said in a note sent out last week. This was the lowest since May 3, and down about 35% from the pre-Pandemic range: 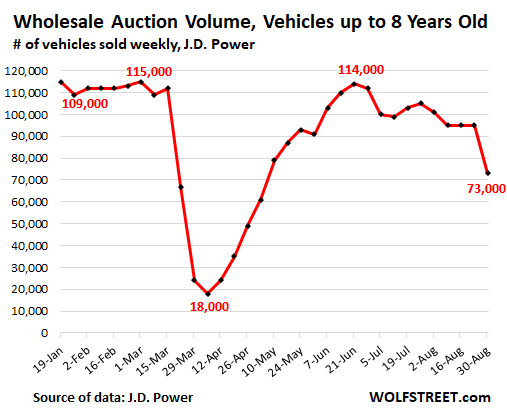 J.D. Power noted that part of the sales decline that week may have been due to Hurricane Laura, which struck western Louisiana on August 27.

Auction prices, after the collapse in late March and April, and a blistering surge in May, June, and July, were losing steam in August, and peaked in mid-August, at 14% above their pre-Pandemic levels. 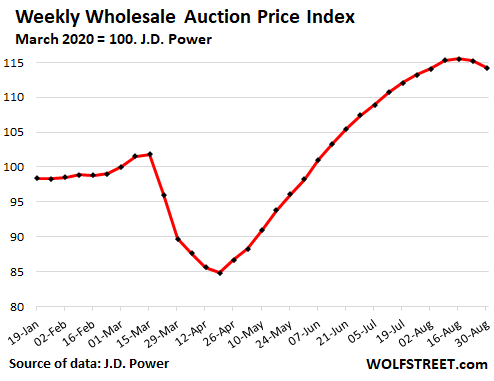 This weekly auction data shows how the decelerating price gains in late July and early August turned into weekly price declines in a systematic way, indicating that the underlying chaotic dynamics of the supply shock and the simultaneous demand shock were starting to “normalize” – and prices with them.

The data by J.D. Power and Manheim agree that the wholesale price surges in the prior months had been ginormous, and that prices weakened toward the end of August. In summary:

The year-over-year prices spread across all segments in Manheim’s data, but were particularly strong with pickup trucks (+23%) and luxury cars (+20%): 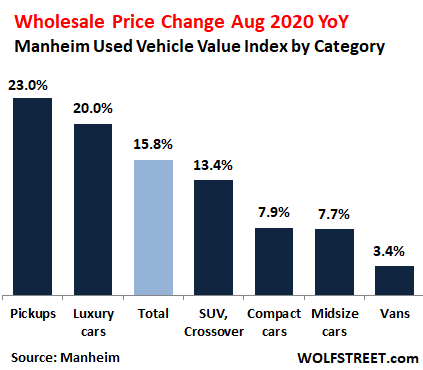 In terms of retail vehicle sales, there has been no sign of pent-up demand, neither with used nor new vehicles.

Used vehicle retail sales in August were still down 2% from August last year, according to Cox Automotive estimates, running at a seasonally adjusted annual rate of 20.3 million vehicles, down a tad from July.

New vehicle retail sales in August were down 15% from a year ago. By adjusting for the two selling days that this August was shorter than August last year, the seasonally adjusted annual rate of sales, at 14.0 million units, was down 6% year-over-year. For the first eight months of the year, retail sales are down 17%.

Fleet sales were still in collapse mode, down 51% in August year-over-year and down 44% for the first eight months of the year, as rental car companies are still defleeting, rather than buying units, with Hertz and Advantage still wending their way through bankruptcy proceedings.

And total new vehicle sales – fleet and retail combined – for the first eight months are down 21%.

During the early months of the Pandemic, a supply shock and a demand shock coincided, when retail sales collapsed, and the supply of used vehicles got squeezed from several directions, including:

But the supply shock has loosened up. At the end of July, Hertz Global Holdings struck a deal with creditors that allows it to sell at least 182,500 of its units by the end of this year; those units are now coming. Trade-ins are happening again in larger numbers, and off-lease units are showing up again, and the market is digging out from the mess that caused these enormous distortions in wholesale prices.

J.D. Power expects wholesale prices to continue to decline through the end of the year to where they’ll be just “slightly” higher than before the Pandemic. But given the uncertainties all around, and “given these unknowns,” it said that “a heightened degree of market volatility should be expected.” And I can go along with that assessment – given the gyrations in the wholesale market we have seen during the Pandemic so far.

SoftBank was only a cog in the huge machinery…. THE WOLF STREET REPORT: This Tech-Stock Sell-Off Is a Sign Something Broke