Four Days of Free-Fall Mania.  Dream goes up in smoke. Passed over by Etsy, Teradyne, and Catalent.

After regular trading hours on Friday, S&P Dow Jones Indices announced which companies would join the S&P 500 Index, and Tesla, tragically, wasn’t on the list. In response in after-hours trading, Tesla shares plunged 7% to $387. 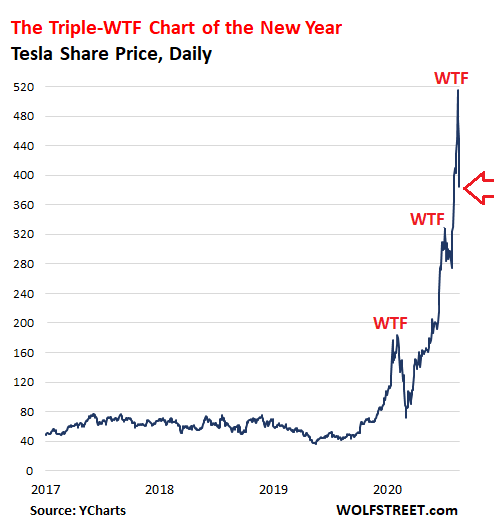 S&P Dow Jones Indices announced in its press release that three companies will be added to the S&P 500 Index (Etsy, Teradyne and Catalent) and three companies would be kicked off (H&R Block, Coty, and Kohl’s). The changes will be effective in the morning of September 21.

Tesla not making it into the S&P 500 is a major tragedy for fans of the stock, for whom that induction was an unquestionable certainty, and one of the rational and indisputable foundations of why the company should be worth three times as much as Toyota, or ten times or whatever, though Tesla has a global market share in the auto industry of less than 1%.

The press release didn’t say why Tesla wasn’t included in the S&P 500. One of the minimum requirements is that a company make a profit on a GAAP basis for four quarters in a row.

So surely, for fans of the stock who thought that shares would quintuple over the next three months based on the inclusion in the S&P 500 Index, this is just another minor setback on the way to Mars.

If stocks made a sudden connection to the worst economy in a lifetime, after having been disconnected for months, that would be a disaster, however. Read…  Wall Street’s New Meme: Selloff is “Good News for Tech Stocks” after Robinhood Call-Options Traders Are Properly Wiped Out

148 comments for “Tesla Not Added to S&P 500 Index, Shares Plunge After-Hours: Triple-WTF Chart of the Year Turns into Sharp Spike”