Suddenly, a whiff of “Don’t fight the Fed?”

Over the last two trading days, Thursday and Friday, the Giant 5 stocks combined fell by 7.4% in value. The Nasdaq dropped 6.2% over those two days. For Apple, the most giant of them all, the selloff started on Wednesday:

The Giant 5 market capitalization had hit a new mind-boggling record of $7.81 trillion on Wednesday – despite Apple’s drop – having skyrocketed from their crisis-low ($4.1 trillion, on March 11) by 91%, or by $3.72 trillion, just these five stocks. Seen in this light, and in the light of their 271% rocket-ride since January 2017, this two-day drop, which wiped out $578 billion in market capitalization and was the steepest two-day drop since March 9 (-12.9%), is really just a small squiggle (market cap data via YCharts): 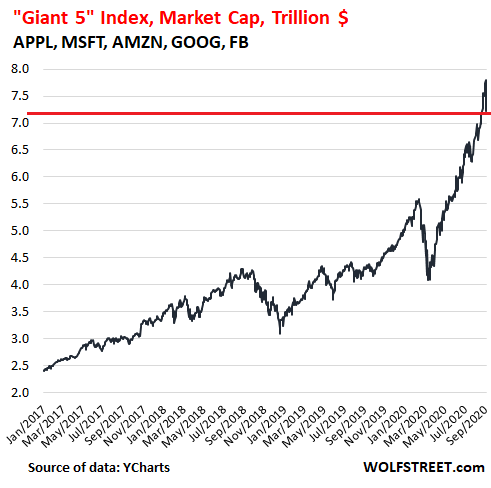 The two-day drop just put them back where they’d been for the first time on August 24. In other words, there had been a blistering rally all summer that had followed a blistering rally that had started in March, and then in two days, only the last eight trading days of that mega-rally were unwound.

So it wasn’t exactly a cataclysmic event, but a minor selloff in a market that had gone completely nuts during the worst economic crisis in a lifetime.

And all the other stocks without the Giant 5? 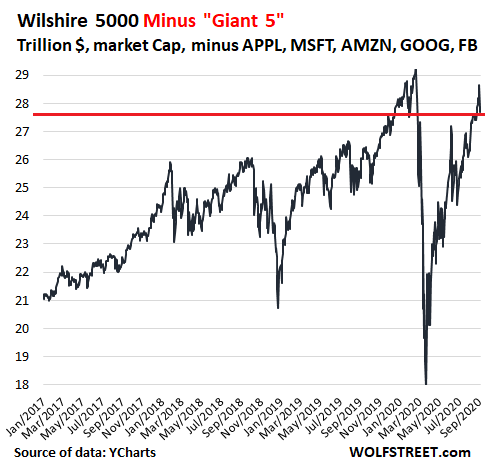 Giant 5 and all other stocks since February, in percentages. 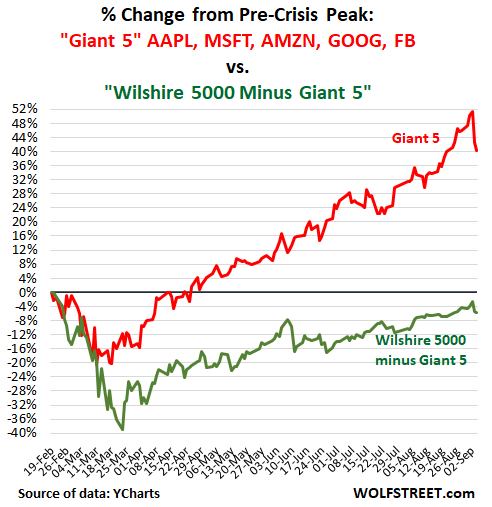 The weight of the Giant 5 in the total stock market peaked at 21.5% on September 1, in terms of market capitalization. At the close on Friday, it was down to 20.7%. Just five companies account for over one-fifth of the value of all stocks and ADRs traded in the US.

And to round out the tech-focused FANGMANTIS stocks, that in addition to the Giant 5 also include:

This selloff comes after August that had been the best August for the S&P 500 Index since 1986, which had come after a red-hot July, in an overall blistering rally during the worst economic crisis and the worst unemployment crisis – 29 million people are still claiming unemployment insurance – in a lifetime.

Suddenly, a whiff of “Don’t fight the Fed?”

The blistering rally was ludicrous from a fundamental point of view – a total disconnect from the economy, corporate revenues, and corporate earnings.  It might have made sense from a Fed-QE point of view, as the Fed was throwing $3 trillion at the markets, but the Fed has stopped doing that. Its balance sheet peaked on June 10 and has since then declined by $151 billion.

And the Treasury securities the Fed is still buying are just monetizing a small part of the huge amount in new Treasury debt that the government issues, the proceeds of which are distributed as stimulus, unemployment, and bailout monies to consumers, businesses, and municipalities, and much of this money is spent, rather than handed to Wall Street. Could it be that there’s suddenly, a whiff of “Don’t fight the Fed?” 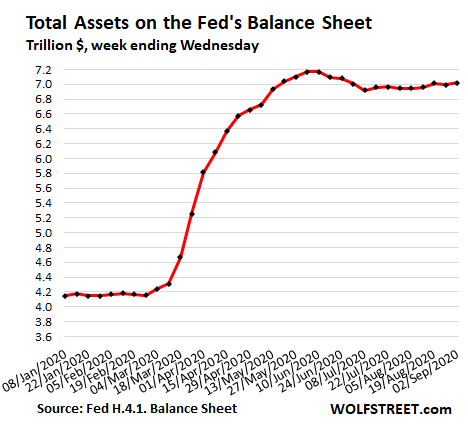