Powered by a nasty jump in continued unemployment claims under the federal Pandemic Unemployment Assistance (PUA) program for contract workers, established under the CARES Act, total continued claims under all state and federal programs jumped by 2.2 million, “not seasonally adjusted,” to 29.2 million people on unemployment rolls, the highest since August 1, according to the Department of Labor this morning. 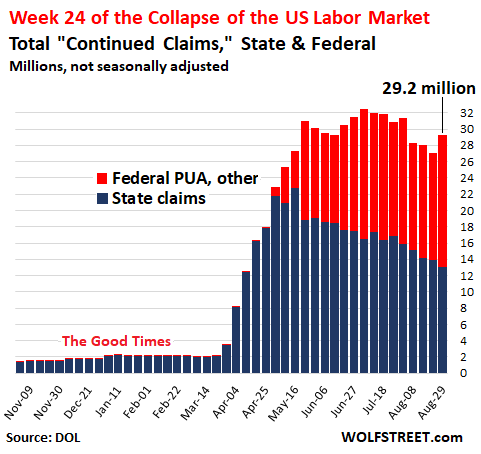 These 29.2 million people, “not seasonally adjusted,” who continued to claim unemployment insurance (UI) under all programs translate into 18.3% of the civilian labor force (160 million, according to the Bureau of Labor Statistics).

The number of people who continued claiming UI under state programs fell by 764k to 13.1 million (not seasonally adjusted), along the downtrend that began in May.

Red columns – continued claims under federal and other programs:

The number of people on UI under all federal programs established by the CARES Act and some other programs soared by 2.97 million (not seasonally adjusted):

Initial claims under state programs rose by 7k to 833k, “not seasonally adjusted,” in the week ended August 29. They’ve been in the same range over the past four weeks, with no improvement. 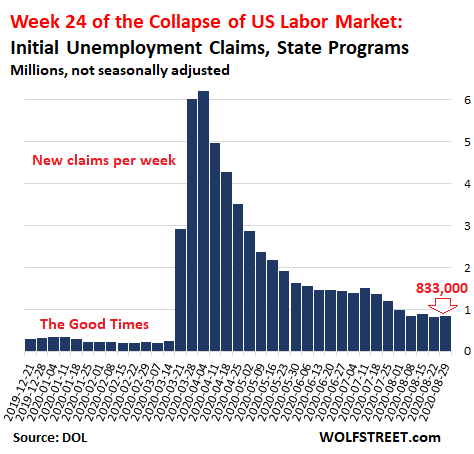 Initial claims under the federal PUA program for contract workers jumped to 759k, from 608k in the prior week (not seasonally adjusted).

Labor Department’s fix of “Seasonal Adjustments” that had gone rogue.

In May, it became clear to me that seasonal adjustments were wildly distorting unemployment claims, and I switched to discussing only “not seasonally adjusted” unemployment claims, which is what you see here. Last week, the Labor Department explained why these adjustments had gone rogue and how it would change its method of figuring “seasonally adjusted” claims starting today. And it did.

Just how rogue these seasonal adjustments had gone is demonstrated by this chart that shows the difference between “seasonally adjusted” initial claims and “not seasonally adjusted” initial claims. The difference should be in line with the seasonality of the labor market. The largest seasonal factor is the surge in unemployment claims in late December and January (the big dips in the chart), following the surge in hiring during the holiday shopping season. But during the current unemployment crisis, those adjustments went rogue: 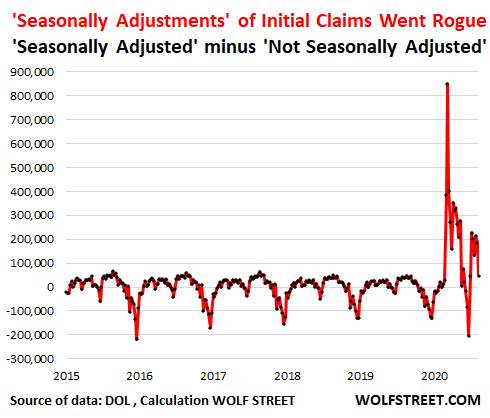 In the chart, you can see that the entry for this week dropped as a result of the new system of figuring seasonal adjustments, and is now about where it was last year in this week. So it seems the fix of “seasonal adjustments” is working. However, I will continue to report “not seasonally adjusted” claims at least until the dust settles.

A sort of sector rotation of layoffs, and it’s not a good sign, even as millions of lower-wage workers are being hired back. Read... The Second Wave of Layoffs is Here, Now Hitting Well-Paid Jobs